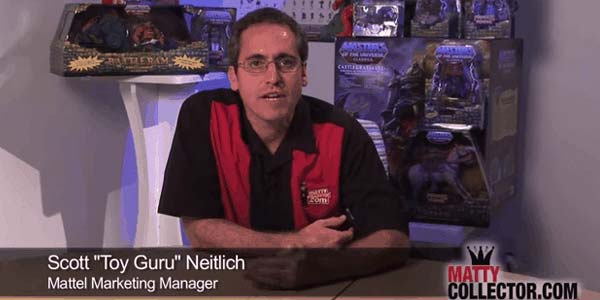 Well, that was unexpected.

I swear it would be a full time job just trying to keep up with the behind-the-scenes rumors and scuttlebutt at Mattel.  Earlier this year, along with the announcement that 2015 would be the final year of Club Eternia– and with the 6″ DC Universe already retired– it was strongly rumored that Scott Neitlich, known in some circles by his online handle “Toy Guru,” would be leaving Mattel.

Then last week at New York Comic Con, rumors stirred all over the Con floor that MOTU would likely continue beyond 2015 with Scott clearly still in the driver’s seat.

And now, one week later, he officially resigns from Mattel, to follow an offer from a different, undisclosed toy company.  Who is it?  No idea… but I can tell you that former Hasbro all-star David Vonner has mentioned meetings with Scott recently… Could they be joining forces on something?

I have no idea… a lot of companies adopted the cult of personality approach to their brand managers in the last decade, inspired by Jesse Falcon’s excellent fan outreach back in the Toy Biz days.  But then, it made sense… now, I dunno, maybe not so much?  Most of the toymakers out there are pretty transparent, and maybe I’m just being egotistical due to my profession, but I feel there are more websites out there treating toy collecting news and reviews with a sense of journalistic integrity, as opposed to simply aiding and abetting a massive, free PR machine for companies offering free samples.  So if Scott isn’t as public a figure at whatever his new endeavor is, I truly won’t be surprised.

This is all tertiary right now, because the big question is, what happens at Mattel and Matty Collector now?  Not much, I’d guess.  Scott said 2015’s plans have already been solidified, which makes sense– even though they don’t announce all their plans at the same time, Mattel works about a year ahead, so by this point they would have effectively put a cap on 2015’s products.  Neitlich also mentions some 2016 plans, so it looks like Masters of the Universe will continue in some form beyond next year, although I wouldn’t be surprised if it was nothing more than a limited release “farewell tour” series, as we saw with DC Universe Classics and Ghostbusters.

I’m more curious how Mattel will proceed with fan communications.  Will they find a new face for Matty Collector, to carry them through the next 14 months?  Or will they go the Hasbro route, and outsource a PR firm to handle press communications?  It would be kind of neat to see Mattel’s Design team take the reins at Toy Fair and Comic Con, but who knows?

My predictions?  Scott Neitlich, for all intents and purposes, WAS Matty Collector.  So the site will exist for 2015 in his absence, and at Comic Con, Mattel will announce the official end of the MOTU Classics collection, with a final limited wave of figures being available in 2016.  And then, Masters of the Universe will return to Castle Greyskull to hibernate for a while.

DC will be fine– it’s a full retail line at this point and it’s selling what it’s selling, between Multiverse, Total Heroes and whatever Batman vs Superman movie plans Mattel has in store.  It would appear Mattel already lost the Ghostbusters license, as Diamond Select announced this week they would be releasing 7″ figures of the paranormal heroes.  And that leaves Mattel with their cash cows– Hot Wheels, Barbie, WWE and Monster High… although unfortunately for them, no more Disney Princesses due to the coup by Hasbro earlier this year.

It’s going to be a very different Mattel going forward.  Hell, it already is– Scott was the last holdout at the company really focusing on collector-oriented products, which I think will fall by the wayside completely once MOTU wraps.  It makes sense; we’re seeing a bigger and bigger dichotomy between major companies and their increasingly simple, low-tech releases, and smaller companies are really stepping up to deliver the exact sort of toys that appeal to collectors exclusively.  I know I’ve bought a remarkably small amount of Mattel and Hasbro toys this year, and many more from toymakers like Funko and NECA.

So that’s the future– for collectors, I think we’re on the cusp of finally being considered a boutique market worthy of major retailers’ time.  I mean, Target, Wal-Mart and Walgreens are all carrying toys and special sections to cater to us!  And the future for Mattel will likely be a little ways away from us, and from that collector world.  They will go their way and we will go ours… “ours” being both we, the collecting community, and– more likely than not– Scott himself and whatever new company he is working for.

I think I’m okay with that.  I’ve found I don’t really miss Mattel toys all that much, and can’t say I’ll miss Mattel’s “Toy Guru” too much, either.  But Scott Neitlich, on the other hand… I have a feeling he won’t be off the collector radar for long, and I honestly wish him all the best with his new venture.