“Well Played” is a revealing look into the heart and mind of one of the country’s most celebrated commercial artists.

Fans of toys and collectibles have been amazed by the work of sculptor Tim Bruckner for decades, losing themselves in the refined details of his action figures, the compositional mastery of his statues, and the lifelike expressions of his iconic busts. But his commercial work is only half the story. Freed from the limits of licensors and restrictions of factory reproduction, the ideas and techniques only glimpsed in Tim’s commercially produced sculpts are on full display in his personal work. And now nearly 30 of his most intimate and most spectacular pieces are part of a new gallery show. 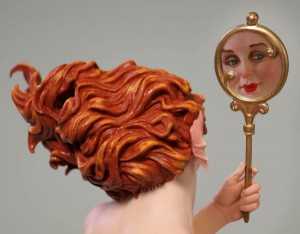 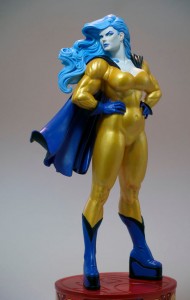 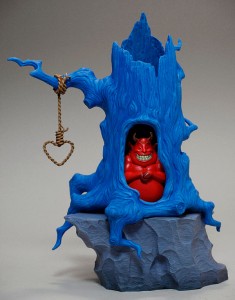 Well Played: The Art of Tim Bruckner will offer a collection of Bruckner’s classic pieces as well as several recent works created exclusively for this show, presented by Krab Jab Studios in Seattle, Wa., starting January 9. Whether based on an existing concept or from Tim’s own imagination, each piece reflects the thoughtful playfulness that makes each of Tim’s sculpts uniquely his. All the work showcased in the exhibition is cast and finished by Bruckner himself, making each a valued one-of-a-kind.

“I’ve been a professional sculptor for nearly fifty years,” says Bruckner. “To be a successful interpretive artist, you need to see the work from the fan’s point of view. It’s not enough to sculpt the likeness of a super hero, you need to try and invest each piece with the emotional context that makes a fan, a fan. And there’s a certain safety in that. With my personal work, there’s no safe place, no cape to hide behind. It’s about trying to be honest about the things that drive me, inspire me, concern me and confound me… and do it without taking myself too seriously. I’ve found that the heavy hammer is much easier to wield if done with a wink and a nod.”

Absolute Woman – Tim’s take on the female superhero, Absolute Woman is big, powerful and sexy, and has been rendered in two different color palettes. “Contemporary headlining heroines all look, to my eye anyway, like Victoria’s Secret models, probably because they’re mostly drawn by men, for men. I wanted AW to look like she could hold her own, independently. She could headline uncompromisingly.”

Octopus Laments – Taking a unique spin on the classic Little Mermaid myth, Tim’s generously proportioned maid seems to float weightlessly, a technique Tim has explored in numerous superhero compositions. “One of the challenges with this piece was to have her appear to be floating without an obvious means of support. It’s a unique challenge sculptors often have to contend with.“

Fatal Attraction – A diorama-style pieces that deals with obsession, when the appreciation of something (money, power, popularity) becomes bigger and more vital than the thing itself. “I went with a lighter, ‘cartoony’ style, because dealing with it in the context of real life would be too gruesome, and too easy to ignore.”

The Clouds Behind My Eyes – A sculpted portrait of a woman whose sorrow is mirrored in a small pool and who weeps gentle tears with the aid of an internal circulation system. In the words of Tim, “It’s a piece of reflective grief. My hope is that as she internalizes her sadness, she draws the viewer in to contemplate their own.”

Well Played: The Art of Tim Bruckner will be housed at Krab Jab Studios, 5628 Airport Way S, Suite 150, in Seattle, Washington, from January 10 to February 6th, 2016. Opening night will be January 9th, 2016, from 6-9 pm, with Tim in attendance. All of the works are for sale, and an online catalog will be available for viewing starting January 10th at www.krabjabstudio.com, To get on the preview list, contact Krab Jab Studio at contact@krabjabstudio.com