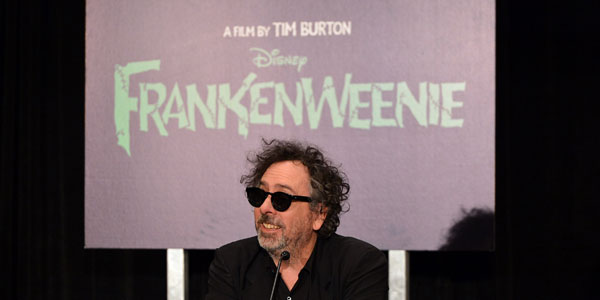 Tim Burton’s Frankenweenie is the new stop-motion feature that sees the director return to his classic short film, and the director was on hand at Comic Con for a press conference about the upcoming project.

Frankenweenie is an iconic short film that introduced fans to Tim Burton’s signature style 28 years ago, and this felt like the perfect time for Burton to return to his roots, with a movie that’s very personal for him. Adapting a short into a feature length film wasn’t the challenge it appeared to be… it was actually a natural evolution thanks to other facets of the story Burton wanted to include.

The new Frankenweenie features other monsters, as well as many kids and teacher characters that the director drew on from his own life growing up.  He loved the idea of adding new plotlines revolving around “kid politics” into the story, although the heart of the original will remain the same– this is an off-center take on the boy and his dog story.

For Burton’s part, the idea is very powerful– a kid and a dog is the first kind of pure relationship many young people experience, and the addition of the reanimation angle is just an added bonus. As Burton puts it, “The Frankenstein element is wish fulfillment,” and he has a point…as a kid I always wished there was a way to keep hanging out with my favorite pets after they died.

Burton has a history of strange and interesting characters, especially in his animated features, and Frankenweenie will be no exception. The footage screened at Comic Con and the art style is distinctly Burton, and looks pretty great.  Some of the movie’s new characters were created for the film, while others were Burton inventions from the past, which he finally found a home for.

Frankenweenie will be Burton’s first black and white film since Ed Wood, and the opportunity to do not only animation, but 3D in a black and white film was too enticing not to take on. 3D always tends to skew toward a dark picture, and Burton used his Alie in Wonderland experience to utilize that darkness, employing the stark lights and shadows offered by black and white to accentuate the look and feel of the film.

The new movie was intentionally smaller-scale than Corpse Bride, with a smaller crew, referential to the previous generation of stop motion animation from the 60s and 70s. The animation isn’t the only reference, as Burton asserted there will be many throwbacks to Universal’s Frankenstein and a litany of other classic horror films in Frankenweenie. From the central plot to Martin Landau’s Vincent Price-esque professor, there will be a lot on display for old school horror fans to love.

Burton is really putting his all into Frankenweenie, and it’s mostly due to the personal connection he feels to the film. In fact, he’s so into Frankenweenie that the prolific director is planning to take a break after finishing this one, to take it all in. “I think I’ve had enough of me for a while,” he said. While I’m certain this hiatus won’t last too long for a director consistently putting out a movie every few years, from the look of Frakenweenie, he will certainly be going out on top.

Check out some footage, revealed for the first time at Comic Con: