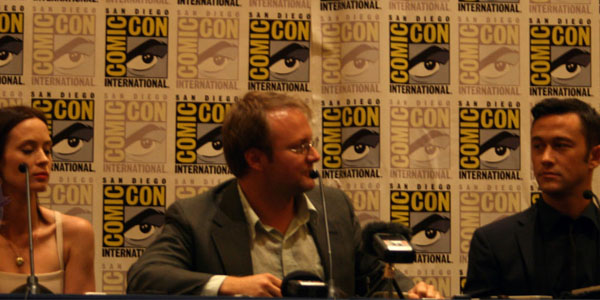 What do you do when you are a hit man that kills people, and the next one on the list is you? That is the question that Joseph Gordon Levitt and Bruce Willis have to face in the new sci-fi action movie Looper. On the panel was the director Rian Johnson, and film’s stars Joseph Gordon Levitt and Emily Blunt. The movie’s title gives a hint at the central point in the movie– life tends to come back to certain issues, like a loop, and people have to make a choice which the road to take in life. This maybe a time travel movie but it all comes down to choices. When talking about the sci-fi aspect of the film the Johnson said all time travel movies”come back to big moral questions.” 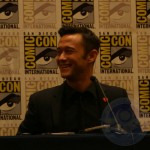 One of the challenges of the film was to make sure the audience would believe Levitt was a young Willis. Levitt sat down with Willis to just chat about life, music, and everyday things to get down the actors mannerisms and nuances. During filming Levitt not only had to act like a young Willis, but at one point was made up to look like him using prosthetics. It caused a few double takes on the set from both Levitt’s family and costar Blunt. Levitt also added that one highlights during shooting was hearing Willis say he looked and sounded like him.

All three were tight lipped about the details of the film focusing more on the making of the film. Looper is a fresh take on the idea of time travel, and totally worth checking out when it hits theaters this August.