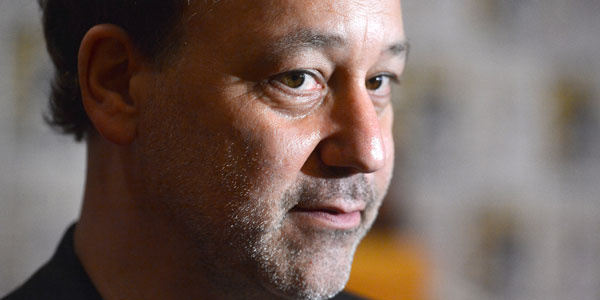 Sam Raimi was at Comic Con to talk about his upcoming Disney film Oz the Great and Powerful, along with stars Mila Kunis and Michelle Williams. Oz was one of the more mysterious upcoming movies coming to Comic Con, and Raimi shed some light on the film being released next year.

The Hall H presentation of Oz the Great and Powerful started with a sizzle reel of Raimi’s storied history, reminding fans of all the great moments he has brought to the screen over the years. It makes sense, as Oz will be both a progression of Raimi’s signature style and also a wild divergence… Oz is the director’s first ever family film.

The movie is “Absolutely different than anything I’ve done before,” admitted Raimi. “This is a family picture.”

Raimi came on board after being impressed with the screenplay, which eschews direct ties to the film classic in favor of Frank Baum’s original books, and comes together as a classic Disney movie, with a central theme of James Franco’s Oz recognizing his mistakes and moving past them to become the iconic Wizard.

The environment of Raimi’s Oz is lush, apparently incorporating quite a bit of CGI to expand Baum’s fantasy world in a way never seen on film. Oz will be a different movie from the original, so don’t expect cameos from any classic characters like the Scarecrow or Tin Man, but there’s certainly going to be some nods to the classic, and the new film will share elements such as the Witches, the Emerald Castle and some flying monkeys… and flying baboons!  But the simians won’t necessarily all be evil, Raimi teased. “There is also a flying monkey. A good one.”

While the family-friendly content will be a departure from Raimi’s most famous movies– as well as being the director’s first 3D movie– some Raimi-isms will be on display. His signature “camera gymnastics” will be featured, employed to show off the depth of the environments in the land of Oz. And of course, Raimi’;s bringing his “mascots” with him, including a role for his brother Ted as well as a fun cameo fro Bruce Campbell!

Williams and Kunis were very excited for their roles as Glinda and the mysterious Theodora, two complex women in this fantasy world. “I was scared going in to it,” admitted Kunis, who holds Baum’s novels in the highest regard. In fact, The Wizard of Oz was the first book she read as a child, which taught her English, so this is a true return to Oz for her.

The trailer for Oz the Great and Powerful made its debut at Comic Con, and circulated online shortly after. Check it out below for your first look at Raimi’s take on the magical land of Oz!