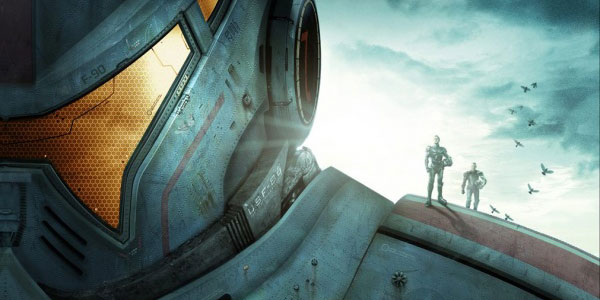 Guillermo del Toro’s Pacific Rim presentation at Comic Con was relatively short but totally sweet, offering an exciting insight into his world of giant monsters and the robots who battle them.

The good news is this:  The teaser trailer for Pacific Rim, shown in front of a packed Hall H at Comic Con delivered on the long-stewing promise of GDT’s kaiju monster fighters movie.  The sense of scale, not only of the giant beasts and the robots (called Jaegers) who combat them, but of this world GDT painstakingly crafted are impressive to say the least.

Based on the trailer, which gave us our first on-screen glimpses of the mega-scale battles awaiting us next Summer, there will be quite a few monsters and Jaegers on display (about nine monsters and six or seven Jaegers).  Each of them is uniquely distinct, as well as very oldschool– there’s no Transformers-esque jumble of tacked-on garbage (er, “details”) on these massive robots.

del Toro’s past work has proven he has more than enough skill to pull off a movie on this kind of mega-scale, and much like the living, breathing worlds he painted for movies like Hellboy and Pan’s Labyrinth, Pacific Rim looks like it will be a movie way more all-encompassing than the typical Summer blockbuster.

The bad news is this:  The Comic Con trailer will be the only footage of the movie revealed until the this Winter (a trailer with The Hobbit, perhaps?).  Mark my words– you should ready your calendars for both that trailer, and next July when this movie finally hits… it’s gonna be a long wait til then.