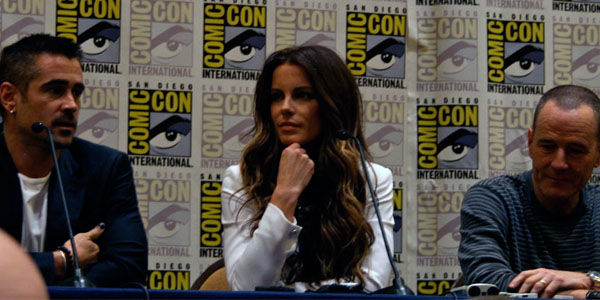 Sony pictures dusted off one of Arnold Schwarzenegger’s most memorable action movies, Total Recall. The remake’s action looks sleeker and the future seems even closer then it did in the 90’s.

At the press conference, the main cast of Colin Farrell, Jessica Biel, Kate Beckinsale, and Bryan Cranston, along with director Len Wiseman gave us some info on the updated action flick. 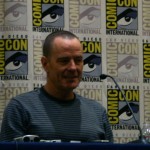 Farrell takes on the main character of Quaid, a man who’s life and memory have been replaced with a whole new reality– a new life with a different wife, home, job, and no memory at all of his past. He finds he needs an escape and tries a new form of entertainment, Rekall, a virtual reality program like the Matrix where a person can be whatever they want for a short time. When Quaid gets plugged in, his former self is awakened and his new life unravels.

When talking about playing both side of the character Farrell said, “What’s in a name?” And playing this dual character comes down to “Nature vs. nurture” 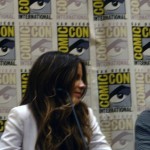 Both leading ladies were kind when talking about who was the toughest on the set, both referring to the other as the tough one. During the discussion, the guys on the panel, led by Cranston, were egging on a Biel vs Beckinsale throw down to settle who was the toughest. None of the actors suffered any major injuries during filming, except for Cranston getting pink eye. The actor had to work through fight scenes with his eyes swollen and red, which was corrected during post production

The film itself takes people on a ride with new twists that will make this a whole new experience for fans of the original. There is no trip to Mars in this version, so all the action is set on Earth. Wiseman wanted to make this new world close to our own because of all the new technology available to us– the future in Total Recall might not be that far off.

As they wrapped up the panel everyone agreed that the main point of the film is to entertain. The film will take the audience on a ride that with suspend reality, at least for a little while.