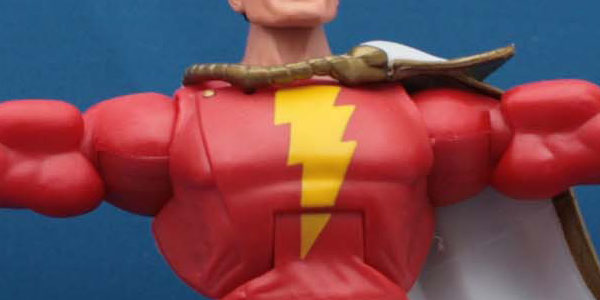 At the request of a friend, I attended the Warner Archive panel that was debuting the Shazam! Series on DVD. I make no bones about it: I went entirely to get a Shazam Lego for my friend. I was even brazen enough to ask the moderator what I had to do to get one. He would only say that it would be great to ask a good question at the end of the panel presentation. I sat down and what played before me was Chuck Norris: Karate Commandos. Still unsure of the hour that laid ahead of me, the folks at Warner Archive were introduced and my reluctance in attending became an appreciation for their work and a desire to rekindle my fondness of cartoons gone by.

The intention of the panel was to premiere the Shazam! Series on DVD. We were treated to a 5 minute splicing of the moralistic series, followed by some Q&A with Shazam! star Michael Gray and the fine folks at Warner Archive. Among the stories of his career, his teen-idol status, and his goings-on today, Michael Gray said it best: he was proud to work on a series that was moral, good-natured, and had a positive impact and message, something that was sorely lacking in today’s more consumptive society. While I agree, the irony that this panel was at Comic Con was not lost on me.

Another series shown was Gene Roddenberry’s short-lived “The Lieutenant”, featuring a cameo by Leonard Nimoy himself. In addition, a clip that Warner Archive screened featured a composite of their vast collection already available for purchase. I saw everything from Pac-Man to Chuck Norris: Karate Commandos, and it was astounding to me. While we were all there to see Shazam! and celebrate that series, I was treated to all of Warner Archive’s fine efforts to capture our attention, our nostalgia, and our imagination.

When it was time to ask a question, I knew I had to go up there but I wasn’t sure what to ask. I liked what I saw in Shazam!, but I was more impressed by the efforts Warner Archive put into resurrecting obscure series from my childhood. My question became a comment, and it was simply “thank you”… but in a wordy two-minute diatribe where the moderator was trying to cut me off in order to give the other fans behind me time to ask their questions. Well, mission accomplished: he called my name at the end of the panel, and I secured the Lego. But in that panel, I was given a special glimpse into the fine work of Warner Archive. I may have to add Thundarr the Barbarian and Pac-Man to my shopping cart when I get home from my trip.