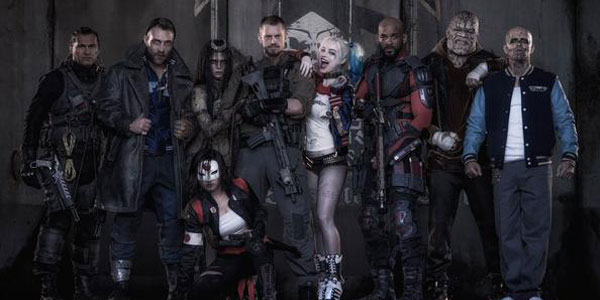 “It’s time for bad versus evil!”

David Ayer made a surprise appearance at the Warner Bros Comic Con panel, bringing a delightful bit of attitude (including talking some shit about Marvel Studios’ shortage of strong villain characters), as well as some footage from the upcoming Suicide Squad movie.  Sure, the Batman vs Superman trailer is all anyone is talking about right now, but I have a feeling Suicide Squad will be the one that really connects in a huge way.  This looks like it could be something really special.

It’s dark, and dirty… in the clip, we saw an imprisoned Harley Quinn licking one of the bars of her jail cell, as well as Jared Leto’s Joker about to straight up torture some guy.  There’s a nastiness to this footage– even government operative Amanda Waller is totally cutthroat and cold as ice– but there’s also a manic energy on display that makes this movie look super fun.

While Zack Snyder’s Batman vs Superman footage certainly had an epic sense of scale, it was so, SO self-serious… while Suicide Squad doesn’t appear to be Marvel level silly and self assured, it has something unique in its grime and mean streak and what we see of the ugly, weird characters that compose this team, that I think it could be the first legitimate breakout hit of DC’s shared movie universe.

I’ll put it this way– the entire cast came on stage when the footage ended.  They shouted “Suicide Squad!” and then they just left.  That’s so weird.  And sort of awesome.