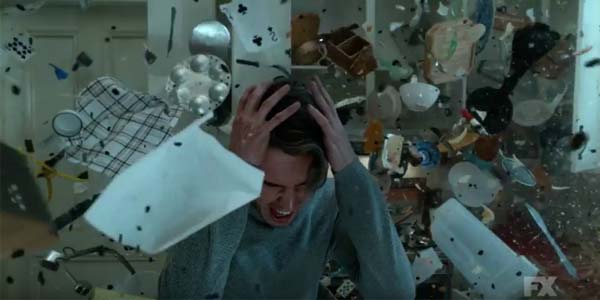 There’s a few TV shows coming down the pipeline which take place in the X-Men universe, but Legion will be the first one released… and it looks pretty promising.

Legion follows David Haller, a fairly minor character from the X-continuity (at least until he killed his dad, Charles Xavier, setting off the Age of Apocalypse storyline).  While we don’t know for sure, I’m assuming the TV version of David will have no such relation, and that this show will be more self contained, apart from the X-Men movie universe… but I could be wrong.

What we DO know if the series stars Dan Stevens, the compelling star of fantastic thriller The Guest, as David, who may be the world’s most powerful mutant… as well as one of the most mentally unhinged.  It looks like this show will skate the line between the dark and the fantastical, and I love that… it’s a tone series creator Noah Hawley has absolutely NAILED in his excellent Fargo series, and seeing his take on the super hero genre might be the most exciting thing Legion has to offer.

Legion follows David Haller, a troubled young man who may be more than human. Diagnosed as schizophrenic, David has been in and out of psychiatric hospitals for years. But after a strange encounter with a fellow patient, he’s confronted with the possibility that the voices he hears and visions might be real. Legion debuts in early 2017 and is produced by FX Productions and Marvel Television.

Look for Legion on FX early next year.