The Last Of The SDCC 2016 Mattel Exclusives? 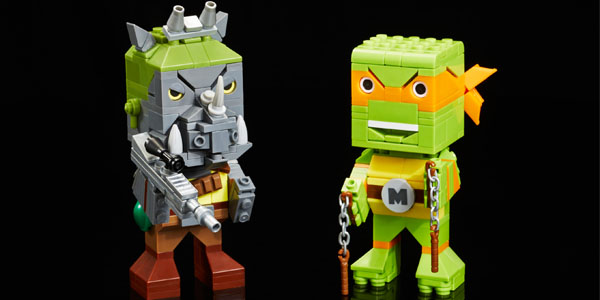 Yesterday Mattel sent over image of the final(?) list of SDCC Exclusives for this year, and they have a big offering.

In addition to the list of reveals from a couple of weeks ago and the Joker and Thundercats this week, Mattel added a couple more to the list of the many toys we will all have to stand in line for this July in San Diego. 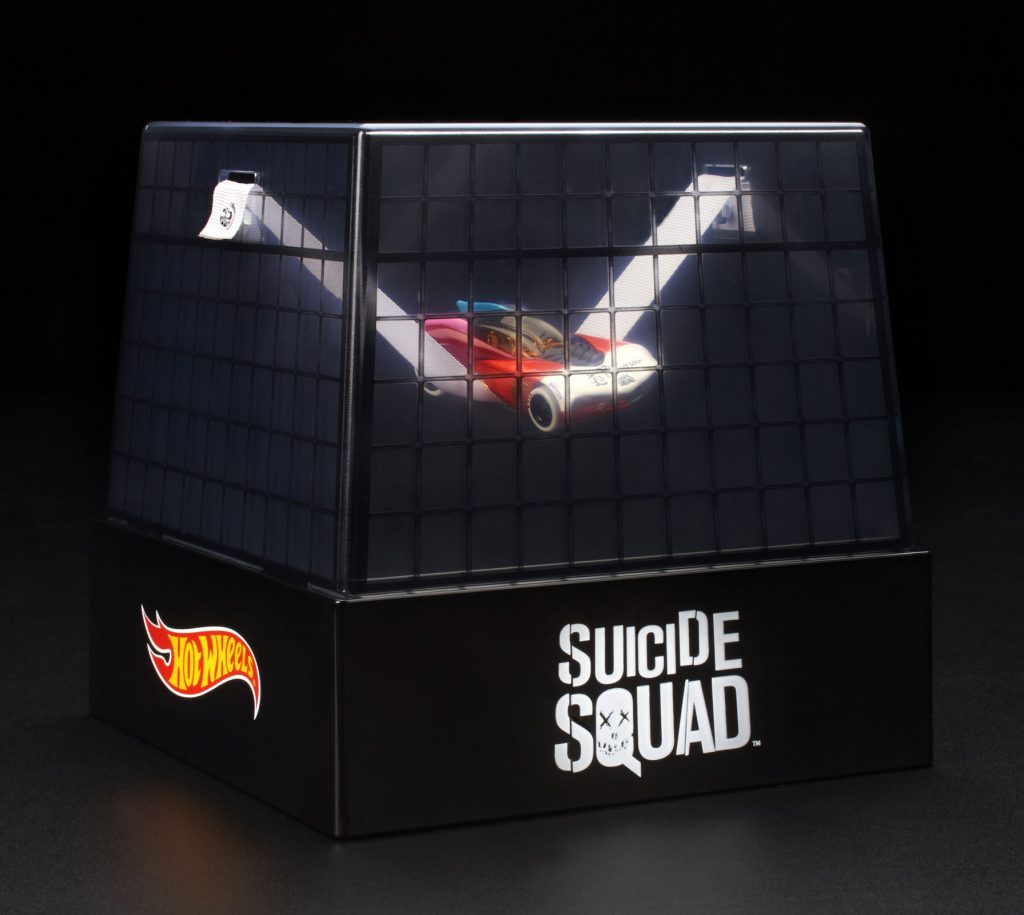 She’s everyone’s favorite psychotic villain. When Harley Quinn joins the Suicide Squad, you learn to expect the unexpected. Celebrate the Suicide Squad film with this first edition Hot Wheels Harley Quinn character car featuring a full die-cast body and chassis and Real Riders® wheels. Housed in a special package that suspends the captured car in an Arkham Asylum cell, it sports tattoos that read “Daddy’s Lil Monster” and “Property of Joker” – and you know that can’t be good. 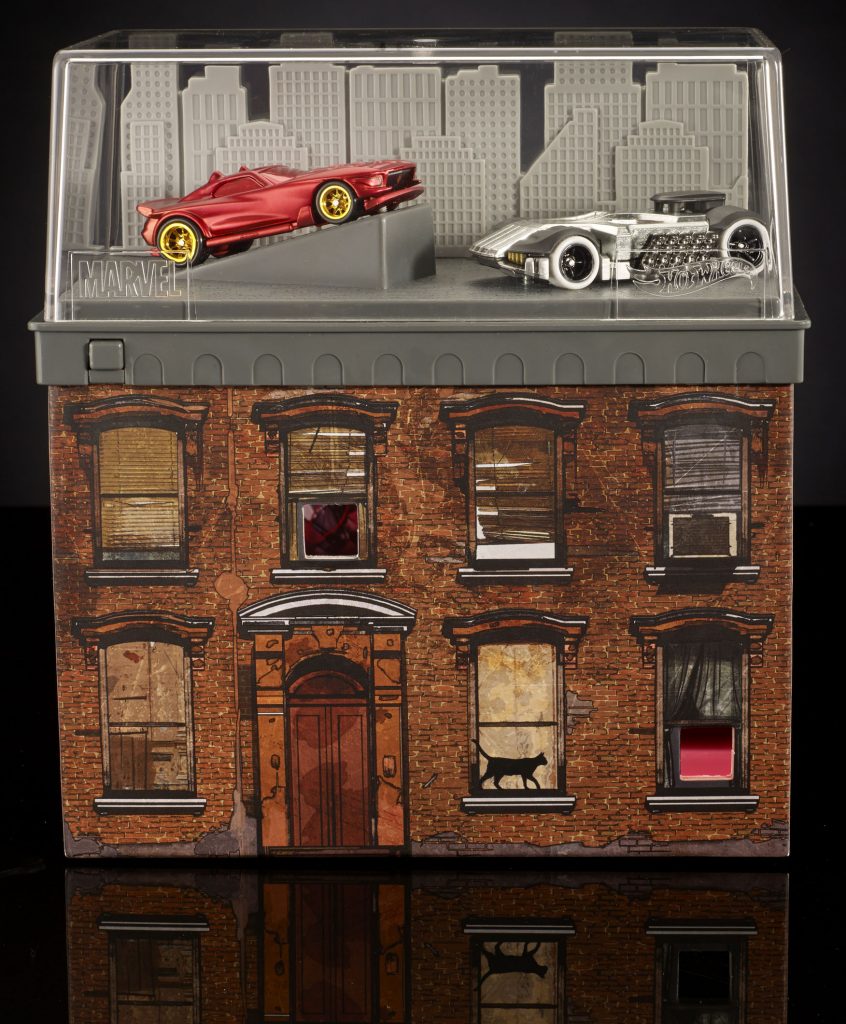 Hell’s Kitchen. It’s New York City’s boiling pot for trouble – but it’s Daredevil’s beat. When The Punisher comes in with his “destroy ’em all” approach, things get even hotter. This San Diego Comic-Con set commemorates that heroic clash with two premium edition Hot Wheels® character cars: Daredevil and The Punisher. Sealed in a protective acrylic case, the cars feature Real Riders® wheels and are perched on top of an NYC building with a 3D city skyline backdrop. With the press of a button, the building’s window lights up, flashing from red to white, to reveal a glimpse of Daredevil’s battle with The Punisher inside. The packaging art was created by comic book illustrator Alex Maleev! 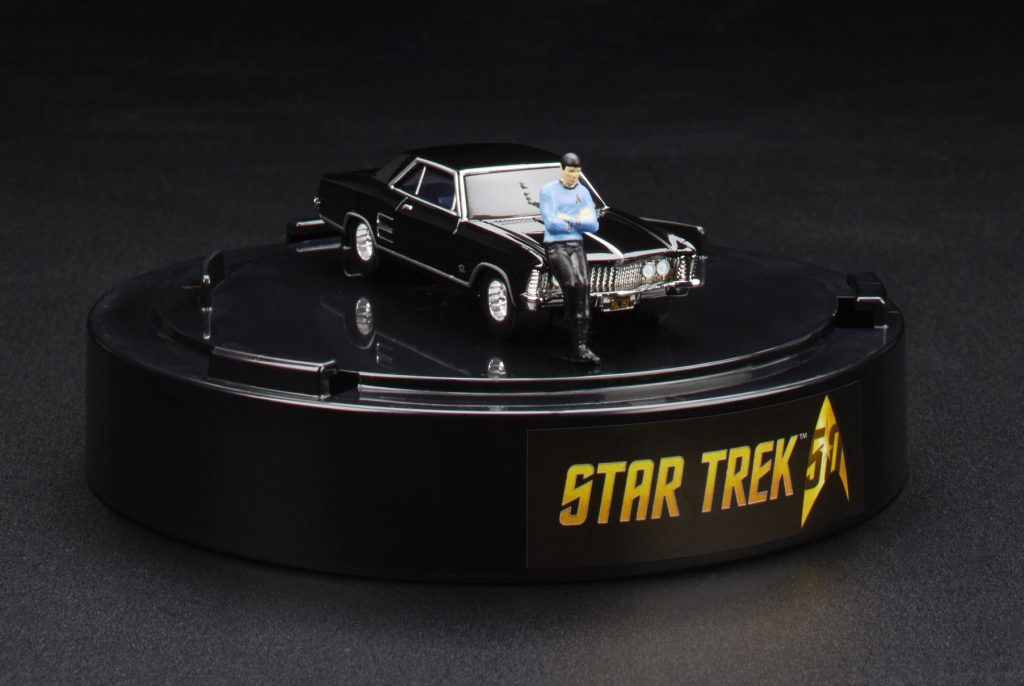 When the Star Trek series first blasted off into the stratosphere, the soon-to-be- famous actor who made Mr. Spock one of TV’s best known sci-fi characters rewarded himself by becoming the proud owner of a stellar ’64 Buick Riviera. So proud, in fact, that he posed for an iconic photo while dressed in full Starfleet uniform with his car on the back lot of the TV studio. Hot Wheels® proudly pays tribute to the 50th Anniversary of Star Trek with this 3D diorama featuring a beautiful Hot Wheels® edition of the Riviera in a full die-cast body and chassis, with Real Riders® wheels and a Mr. Spock figurine. It’s a highly logical way to honor the milestone and the actor. 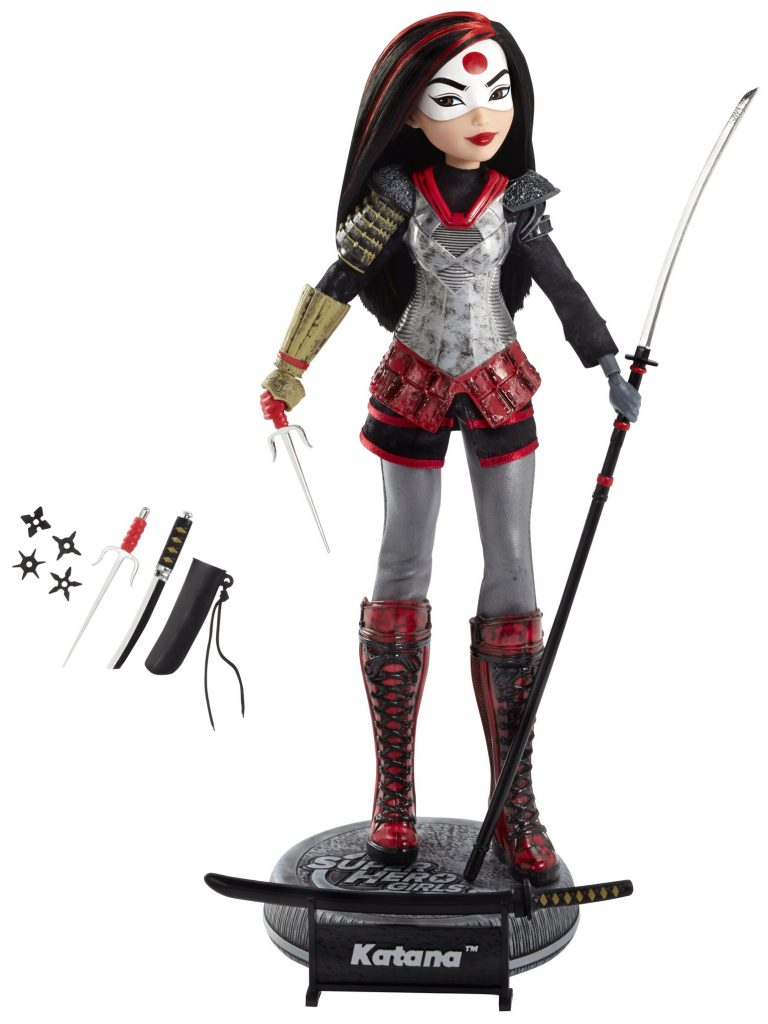 Step out on the cutting edge with DC Super Hero Girls Katana doll! This DC Super Hero Girls doll is inspired by the sword master of Super Hero High and ready for powerful fun. Designed in 12-inch scale, Katana doll comes with five iconic accessories that showcase her martial arts skills — including her beloved sword. Three different left hands — easily interchangeable — allow her to hold the various weapons. Pose Katana doll with her iconic katana or choose from the four shuriken, the two sai, a sheathed tanto and a naginata. True to her fashionable flair, Katana doll’s outfit blends samurai and style for a powerful, action-ready look. Save the day with Katana doll and unleash your power! 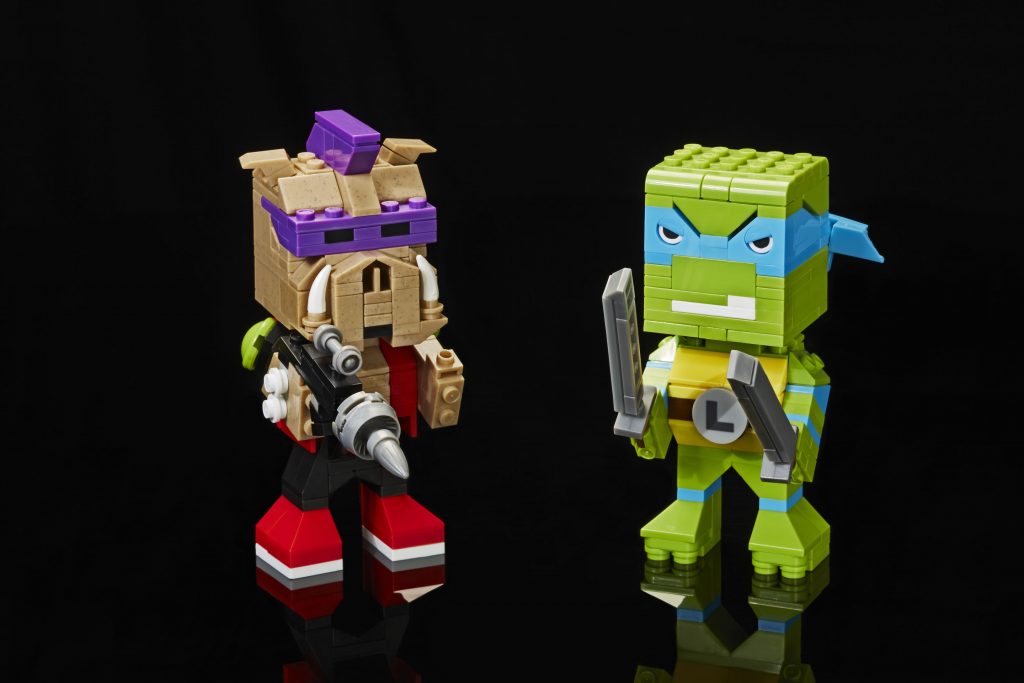 SRP: $25 Available: Onsite
It’s an 8-Bit take on a mutant showdown when you build your own LeonardoTM and BebopTM figures and pit them against each other in a battle of mean vs. green. With a blocky, retro-fied design inspired by the era of classic gaming, these collectible characters bring it back to the old school with iconic details drawn from the original 1987 series. Both figures feature the signature Kubros coin detail and arms and head that move, and come packaged together in an exclusive SDCC box with deluxe TMNT art that Turtle super-fans will love! 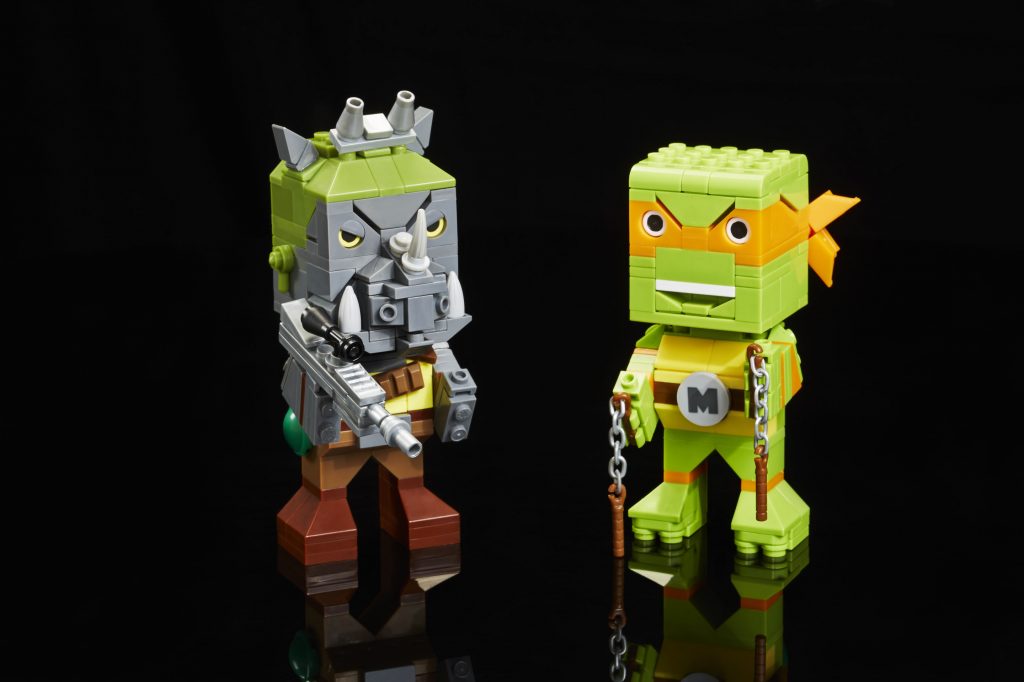 SRP: $25 Available: Onsite
It’s an 8-Bit take on a mutant showdown when you build your own MichelangeloTM and RocksteadyTM figures and pit them against each other in a battle of mean vs. green. With a blocky, retro-fied design inspired by the era of classic gaming, these collectible characters bring it back to the old school with iconic details drawn from the original 1987 series. Both figures feature the signature Kubros coin detail and arms and head that move, and come packaged together in an exclusive SDCC box with deluxe TMNT art that Turtle super-fans will love! 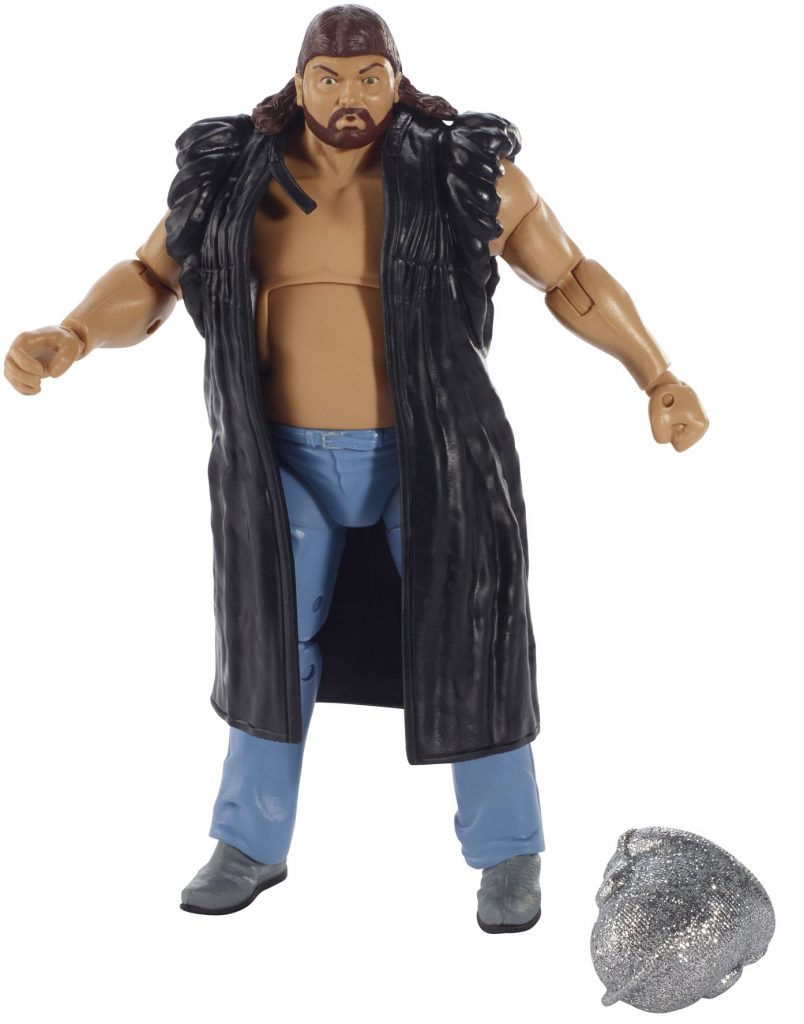 Die-hard WWE® fans will enjoy the ultimate tribute to WWE® Superstars with this elite 6-inch ShockmasterTM figure. Featuring fierce attention to detail, this figure captures the authenticity of Shockmaster. This figure is packaged in a unique way to recreate Shockmaster’s epic fall during his WCW television debut. He also comes with his iconic robe that was intended to enhance his first ever WCW appearance. Now WWE® fans have a chance to celebrate one of sports entertainment’s most talked about Superstars. Colors and decorations may vary. 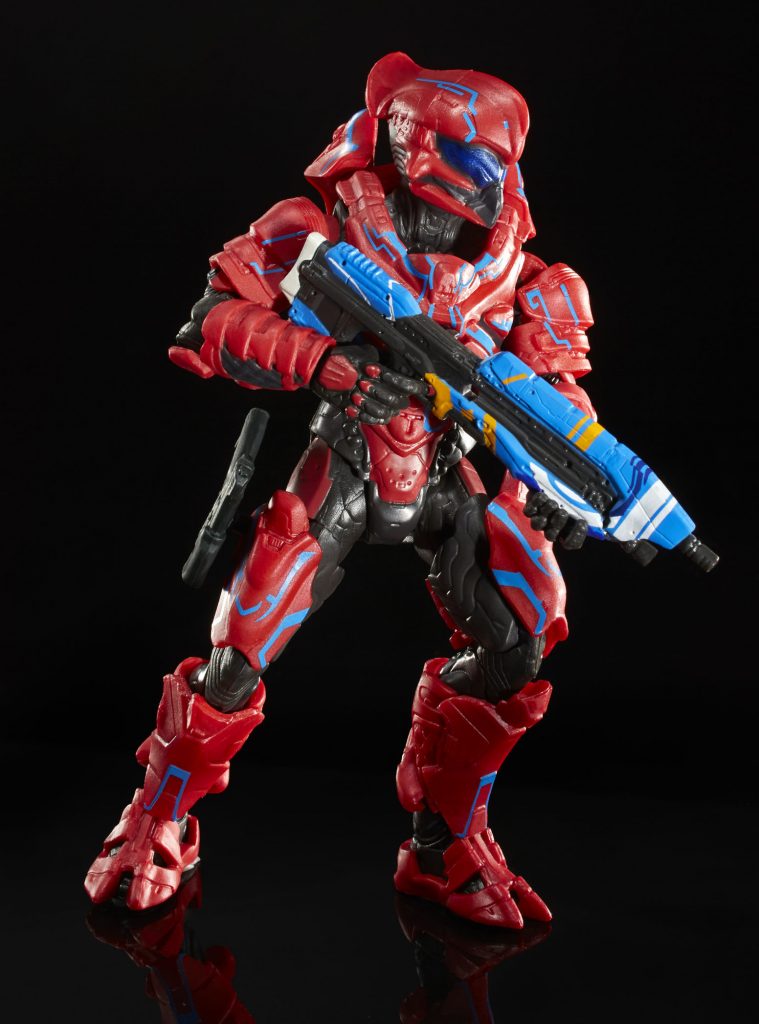 Mattel’s new 6” action figure series brings the world of HALO® to life with an iconic line of UNSC Spartans and Covenant forces! This collector’s grade Spartan Helioskrill figure is designed with extreme detail and includes iconic accessories, removable armor, and 30 points of articulation for a highly poseable form. This figure includes a fully interchangeable, mix-and-match armor suit and 2 accessories so you can customize your figure with others in the full line. For San Diego Comic-Con only, figure comes with exclusive blue visor, exclusive armor decoration, and exclusive legendary MA5 “bracer skin.” Build your collection and create epic, larger-than-life HALO® battles from the highly-acclaimed franchise from Microsoft Studios and 343 Industries. Authentic, game-inspired designs and details are sure to thrill both casual fans and avid collectors alike! Specially designed packaging, just for Comic-Con. Colors and decorations may vary. 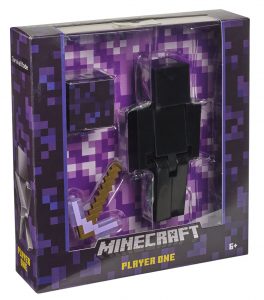 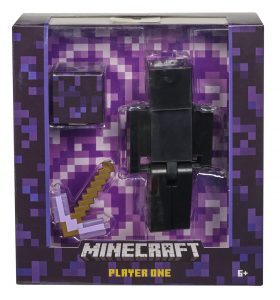 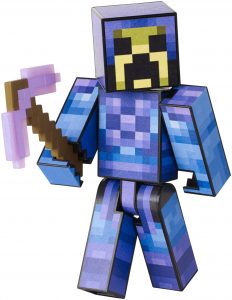 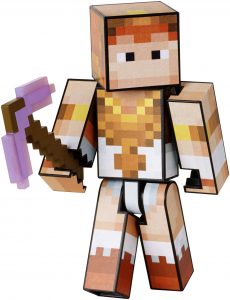 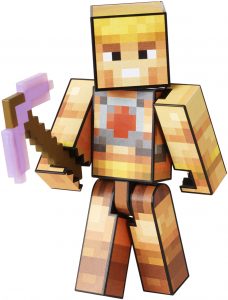 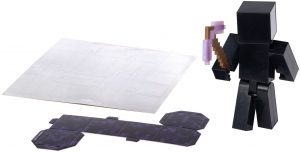 Think you can survive the world of Minecraft? Well, now with your very own Survival Mode Player One figure, your chances have just increased exponentially. The Player One figure comes with an Enchanted Pickaxe and works with Minecraft’s other Survival Mode figures (sold separately). And, you know when it comes to survival, it’s important to be innovative, to be unique, to think “outside the box”, so that’s why we’re giving you a customizable and creative way to make this figure jump right out of your Minecraft world. You get to craft the look of your unique Player One figure by using your actual skin from the game! We create and print a custom label based on your in-game skin and then you get to apply it however you want. We also have an exclusive set of SDCC skins that are only available at the show! Print it, stick it and you’re ready to begin your journey into the world of Survival Mode!