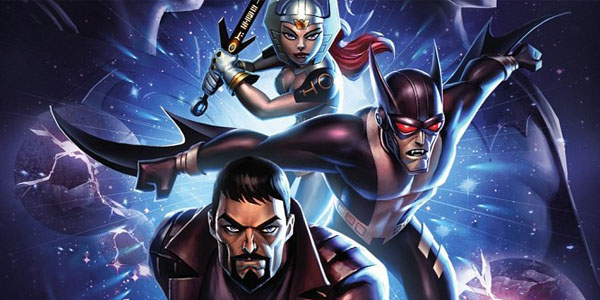 Gods and Monsters breaks tradition and tells a different story about how our heroes became who they are. After being framed  for an embassy bombing, the DC Trinity must fight against government in an alternate universe.

Tamara Taylor from Bones takes Wonder Woman to a new level. Like most people she remembers the Linda Carter, and some of the earlier animated versions. According to her she had to take what she knew and throw it out and give her a new spin. Asked if she preferred voice acting to regular acting she enjoys both each has its own uniqueness.

Discussing Lois Lane, Paget Brewster talked about her take on the character. Much of her influence came from the past Margot Kidder character. She felt she put about 90% of herself into the character.

Allan Burnett shared his thoughts on breaking from typical comic tradition. Allan wanted people to ask how do we see our heroes as gods, or can they be monsters. Breaking traditional characters and giving them a new spin did not prove to be difficult.

Bruce Timm felt breaking traditional characters was a “breath of fresh air”. Characters Batman, Superman, and Wonder Woman are the same in “name only”. He felt they could take the characters and do non traditional things with them and DC could not come back and say Superman or Batman would not do that, but in this new world they could or might.

C Thomas Howell, when asked if he could play any character in the universe, was unsure who he would be but settled on playing Aquaman. He stated he would like to get on the other side but did enjoy playing the bad guy, as he likes finding the humanity in their flaws.

The film flips the world of DC on it’s head playing with the names and roles of the characters. It draws fans in with the names, and twists the world of DC. Some scenes are as shocking as the Red Wedding on Game of Thrones, and proves that just because the movie is animated does not means it is for kids only.

Check out our full review when the film comes out.  The official release date is July 28 2015.