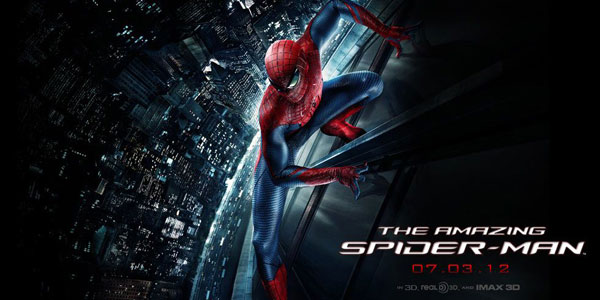 Last weekend Sony released a four-minute clip of The Amazing Spider-Man, and with less than a month to go until the movie hits, the excitement is definitely building.

The four-minute extended look at The Amazing Spider-Man shows off some pretty cool footage from the upcoming movie, and has helped to settle my nerves after the choppy effects work seen in the earlier trailers. The new footage looks quite good, and it’s clear that the scope of the reboot will be much bigger and more “comic book-y” than Sam Raimi’s previous take.

The “swinging around New York” footage looks way better than the forced POV stuff from the original trailer, and thankfully it looks like the final cut will be way better than the knockoff video game feel seen in that preview. I still love that cast, I love the new suit, and the non-organic web shooters Spidey is rocking.  I’ll miss the Daily Bugle and J. Jonah Jameson, but the franchise is young still, so there’s plenty of time to get to him, along with Norman Osborne (who may be seen in the shadows in this clip, actually!), and Denis Leary’s Captain Stacy seems like a good alternate foil for Peter Parker, albeit probably not one long for this world.

I’ve still got some issues based on the new footage– once again it seems like Peter Parker just can’t keep that mask on, but my hope is this will make more sense in context, since he’s really just a generic-looking kid, and most likely Curt Connors won’t have too much of a personal connection to Peter, so there’s no real need to cover his identity to protect his loved ones.  More troubling is the hints that this movie will follow Brian Bendis’ hack retelling of Spidey’s extended origin from the Ultimate universe, in which Peter’s genetics were messed with, leaving him pre-destined to become Spider-Man. It’s a bummer of a twist; more than every other super hero, the thing that made Spidey cool was his everyman appeal– Peter was just a nobody who happened into a freak accident and decided to become a hero. Adding a heroic “destiny” to the character, that his path was set out before him, feels like a cheat to Peter as a character.

In any event, we have under a month until we see how it all plays out in theaters. In the meantime, enjoy this four minutes… what do you think? Are they going in the right direction for young Peter Parker?