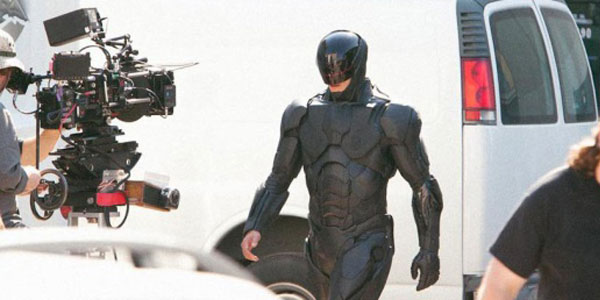 The new Robocop suit design hits the web, and the internet has finally come together to collectively frown upon it.

Strike One:  Darren Aronofsky stepped down as director of the Robocop reboot.

Looking like an abandoned N7 stunt suit from a failed Mass Effect movie– or if the Tron Legacy costumes had a baby with Chris Nolan’s batsuit– nothing about this thing even whispers, let alone says, Robocop. With the three strikes above, I have gone from being intrigued by, to disappointed in, to wanting nothing more to do with the remake of Paul Verhoven’s classic Robocop.

I’m honestly not a reboot-phobe, and I have no problem with even a great movie being remade/ rebooted/ whatever you want to call it.  It’s not like a remake will replace a classic in the bigger pop culture universe, but I truly believe there’s room for multiple tellings of the same story, not unlike a band covering someone else’s song (a very good analogy recently brought up by Devin Faraci at Badass Digest).

What I do take issue with is crappy and pointless remakes, and ones that serve no purpose other than to rake in a mid-range (at best) box office cash grab by jumping on the nostalgia bandwagon.  Movies like this or the recent Total Recall remake seem to be made with no understanding of what made the original films so great, and bring nothing new to the table, relying instead on modern action movie cliches, generic design aesthetics and lame fan-pandering in-jokes and references.

I wouldn’t be so angry about this if I didn’t think there were other good stories left to tell.  Despite its questionable sequels, Robocop presented a kick-ass hero and a great world that I’m sure has more good stories, just waiting to be told.  “Update” anything you want– Hell, retell the origin for all I care– just bring something worthwhile to the table, or at the very least put in enough effort to make us believe you give a shit about this property that we all care about.