Seeley & Norton Dabble in the Horror With The Occultist 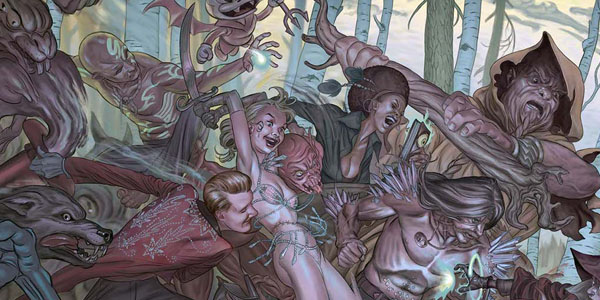 Tim Seeley and Mike Norton Join Dark Horse Comics with The Occultist. Can they fend off the demon babies?

Following the success of Revival, and Hack and Slash Tim Seeley, and Mike Norton are at it again with The Occultist. A young college student becomes connected to a book called The Sword (ancient book of spells)and has to defend himself from demons, zombies,and even his closest friends from trying to kill him and separate the book fromRob(the college kid). The book itself helps Rob who also has the help of a detective named Anna whom Rob seems to have a thing for, defending themselves from killer hungry demon babies stuck in the afterlife in an orphanage.Meanwhile introduced into the story as well is Mr Charles who has taught Rob how to harness and use the power of the book we later find out that there is another motive as to why he teaches him how to use the power. We are left with a major cliff hanger when Rob uses the book to find out if Anna thinks of him as more than a coworker.

Great story, and great art make up another hit for Mike Norton, and Tim Seeley. We step into their world without a question left to ask except when is the next issue coming out? The Occultist casts another Hit spell for these guys. If you like demons, magic, and zombies rolled into one book then pick this book up. I was able to have a quick Q and A with Tim Seeley.

After the success of hack and slash and revival what made you decide to team up with Dark Horse? Dark Horse editor supreme, Scott Allie and I are buddies, and we always look for excuses to work together. I love DH’s books, and I think my style of wrting fits well with their kind of comics!

Is this Story the reason it was decided to end Hack and Slash? Nope!

With words like Zombie being thrown around in the story would you consider this another Zombie story or is there more to it? Revival? I think it’s inspired by aspects of some zombie stories, but the attempt was to do a different kind of story about death.

After reading the book i felt its gonna be another hit for you and Mike. Do you see TV or movie potential with this story as  you did with Revival? Occultist? Sure! I think it’s be a cool kid’s cartoon or a big action/horror movie!

Thanks again Tim for taking the time to answer a few questions.