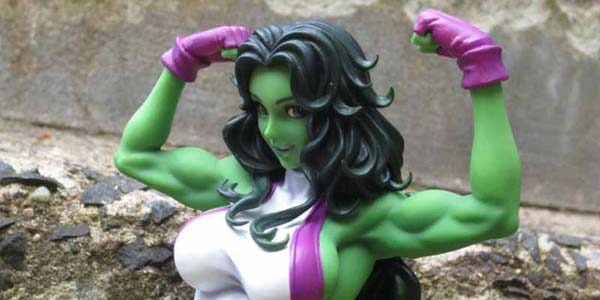 Kotobukiya’s latest Marvel Bishoujo release is a great statue based on a great character.

Of all the female heroes in the Marvel universe yet to join Kotobukiya’s Bishoujo collection, She-Hulk was at the very top of my list.  Jennifer Walters has been an Avenger, a member of the Fantastic Four, and a solo hero both in costume and in the courtroom for decades.  Over that time, she has become one of the most interesting characters in the Marvel universe, and I couldn’t be happier that Kotobukiya and master illustrator Shunya Yamashita have finally brought this jade giant to this long running series.

One of the best traits of the Bishoujo Collection is that each character is given a unique body type, with different proportions that follow the internal logic of their abilities.  Black Widow is athletic, the teenaged X-23 is wiry, and She-Hulk features a stature we’ve never seen in this line before now.  Not only does She-Hulk feature wonderful sculpted details in her wavy hair and the realistic wrinkles in her costume, but her musculature is extremely intricate and true to life.  Jennifer’s statue features way more muscle than any other Bishoujo figure, and the anatomical accuracy of her biceps, shoulders, six pack abs, and leg muscles works very well with her stylized “pretty girl” portrait.  Despite her considerable muscle mass, She-Hulk also remains completely feminine, an impressive balancing act that Koto’s sculptors pull off perfectly.

Many of the Marvel Bishoujo statues feature fairly practical action poses, but She-Hulk presents in a more straightforward pin-up pose.  Standing in a classic contrapposto, the heroine flexes her sizable arm muscles, with a confident and sly smile on her face.  It works well for the character, without feeling exploitative, especially in light of her history in the comics as a strong and capable woman who embraces her sexuality.  This, combined with Jennifer’s uniquely muscular figure, give her pose a playful, sexy sense of power, instead of making her appear like a typical “cheesecake” sexpot.

As always when it comes to Kotobukiya, the paint work on this statue is fantastic.  She-Hulk’s green skin features some great highlights and shadowing, which add depth and emphasize her muscles.  Her purple and white singlet is given a high gloss, semi-metallic finish, which conveys a great sense of texture.  Even the figure’s base– a shattered and crumbled asphalt street– features a well balanced black wash that adds a gritty realism and depth to the relatively simple display.

She-Hulk is sculpted in 1/7 scale, much like Kotobukiya’s other Marvel Bishoujo.  This means she maintains a great sense of scale alongside the other women of the Marvel Universe, towering over most of them due to her increased size.  Between this and her green skin, She-Hulk truly stands out in any display, one of the more colorful and eye-catching statues in this series.  I’m consistently impressed by the skill and craftsmanship Kotobukiya invests in each of their statues, and She-Hulk is a true gem of their Bishoujo Collection.  I love this character, and am happy to see her finally claim her spot in this series.  But even more satisfying is that Kotobukiya’s talented team have created a sculpt that truly captures the essence of the character.  They did not shy away from showcasing She-Hulk’s size and musculature, and the result is a truly unique, visually dynamic and very cool piece. 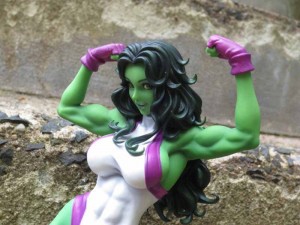 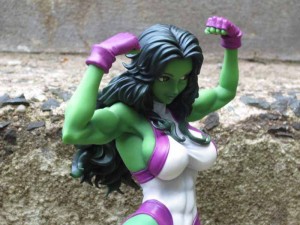 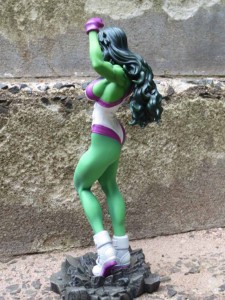 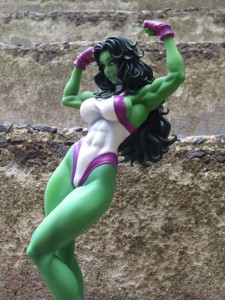 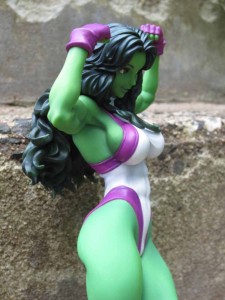 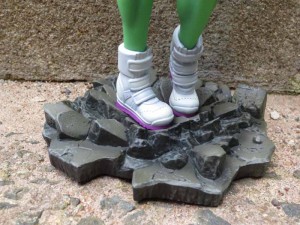 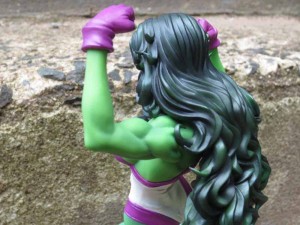 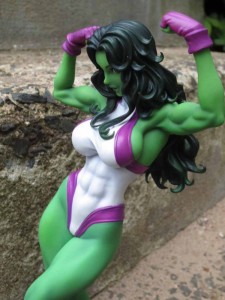 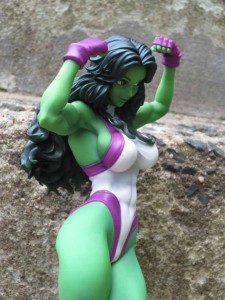 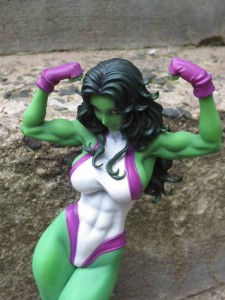 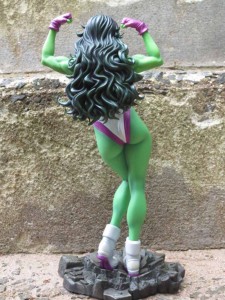 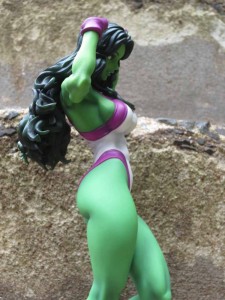 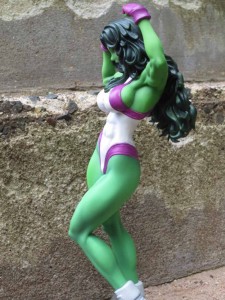 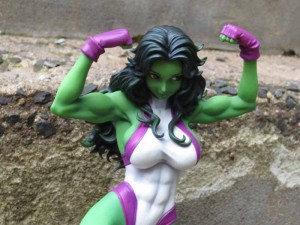 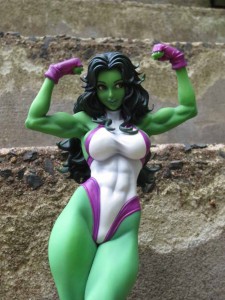