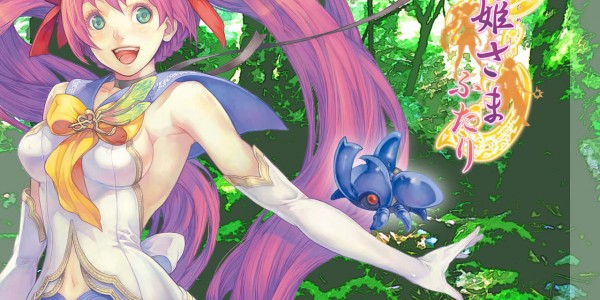 The Bullet Hell or “Shmup” genre is a niche for sure, but has one of the more passionate gaming communities dedicated to completing that perfect run.  Supported by apps from heavy-hitters Cave and Taito, iOS now hosts a larger variety of these titles than both XBLA & PSN and, thankfully, the touchscreen controls truly add to the experience.  In fact, mobile devices may be the perfect platform for modern shmup gaming.

Essentially, these titles put players in control of a small craft capable of firing an endless stream of projectiles and pits them against several levels filled with enemy ships or creatures all shooting back at you.  At times there are literally hundreds of bullets on screen for players to weave through, demanding precise maneuvers to be pulled off in order to survive.  But balancing these twitch reaction mechanics is a great deal of strategy and memorization as all the enemy patterns remain the same during every playthrough.  You can potentially learn where and when each enemy will appear and how they will expend their payload.

Now, traditionally, these games would be played on an arcade cabinet or home console, with an analog stick used for movements and buttons used to shoot and drop bombs.  This experience has largely been streamlined when the titles are ported to an iOS device, however.  Players control ship movements by simply dragging their finger on the screen while it fires automatically.  Not only does this allow for subtle movement around the playfield, but you aren’t stuck essentially holding down a button to shoot (as you would be for about 99% of the game normally). What you get is a fast-paced, addicting, and incredibly fun action game that can be played with one finger.  Let’s face it, even the most hardcore gamer doesn’t want to use their phone as a go-to gaming device — it just won’t measure up to a console experience.  Mobile gaming is best enjoyed when it’s easy to jump into instant action and even easier to control in any setting.  Bullet Hell titles excel at both, offering immediate fun and one-handed gameplay.

Two of the newest titles to hit the app store, Rayforce and Raystorm, represent a more straightforward, balanced approach to the genre.  Originally released in 1993 and 1996 respectively by Taito (which has now been acquired by Square Enix), both the environments and ships are rendered in 3D while the action takes place on a fast-scrolling 2D playfield.  These titles are an excellent place to start for players new to the genre as the gameplay (even on the harder difficulty settings) won’t immediately appear to be impossible or cheap.  Enemy patterns are apparent and a practiced player will find themselves able to rack up huge scores.  The cool mechanic specific to the “Ray” games is the lock-on missile cannon.  A reticule is always present directly in front of your ship and any enemy craft you can focus it on will become targeted.  You can rack up a number of targeted enemies (depending on your cannon’s capacity) and dispense multiple missiles at once to drive up your score multiplier as well. 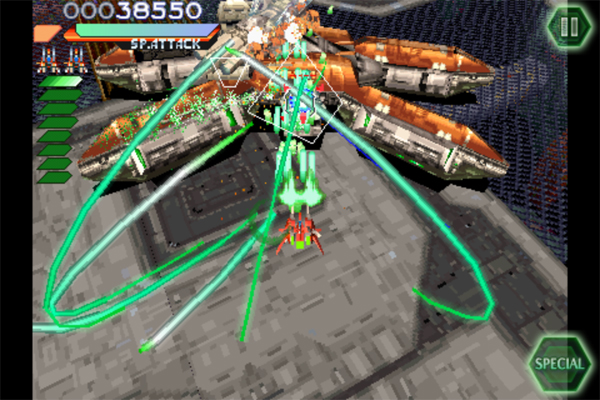 Meanwhile, Cave Co ltd has made modern shmups into an artform and, with a plethora of titles available in the app store, continue to churn out inventive twists on the genre.  Currently, they offer ports of their hit titles Dodonpachi Daioujou (2002), Bug Princess (2004), several versions of Espgaluda II (2005), Deathsmiles (2007), Do-Don-Pachi Dai-Fukkatsu (2008), Mushihime-sama Bug Panic (2010), and Bug Princess 2 & Bug Princess 2: Black Label (2012).  Any one of these would be worth braving the somewhat prohibitive price point to obtain just for the frantic non-stop fun that they supply at the tap of a finger – but luckily, for any skeptics who want to try them out before buying, Cave offers free “lite” versions of nearly all their games that will give perspective buyers a taste of the full paid version.  With the exception of Deathsmiles, the other three available franchises all use 2D sprites and backgrounds while the action takes place on a vertical field.  They switched things up a bit with Deathsmiles, however, and built the title using characters and environments rendered in 3D on a horizontal scrolling field.  Not only that, but this may be the only shooter of its kind that sees enemies enter from both sides of the screen — Cave added an additional button that lets you switch your orientation to deal with enemies on either side of you.  While the core mechanics are shared through basically all Shmup titles, it’s subtle tweaks like this that really keep things fresh and give each game its own personality.  Everything they’ve put out is huge on action, features beautiful art direction, fantastic soundtracks that range from orchestral scores to old school electro arrangements, and controls like a dream.  Cave has solely been producing these types of games since the ’90’s and have truly become masters of their craft. 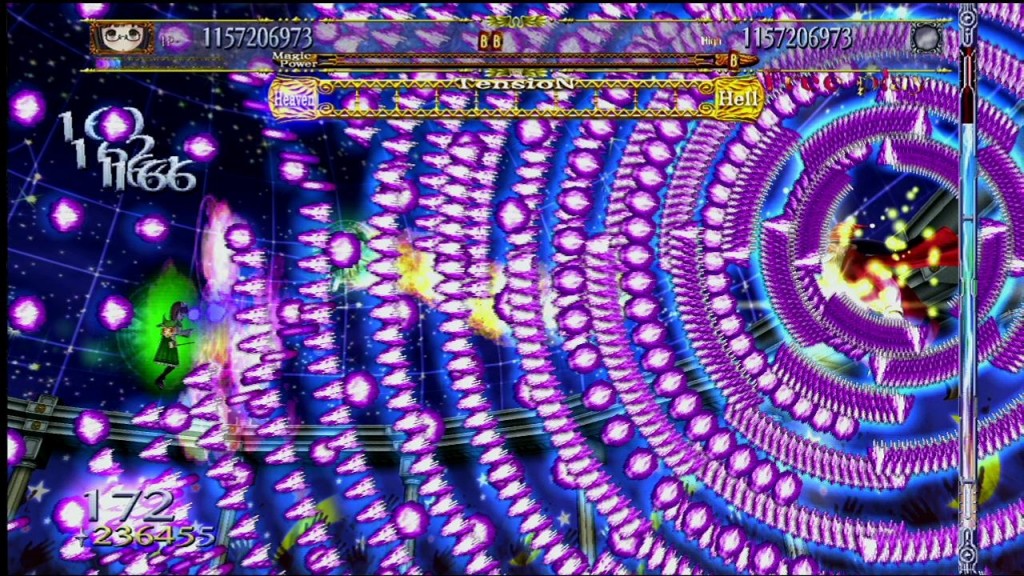 Speaking as not only a fan of shooters, but as an avid gamer who’s tried a multitude of games on my mobile devices, these titles are really the quintessential gaming experience on an iPhone or iPad.  There are no complex stories to get invested in, no need to dedicate many hours in a play session, no needlessly complicated controls to remember, and no lengthy cutscenes to deal with — just brilliantly animated, old-school arcade action that’s accessible by casual and hardcore gamers alike.  A wealth of options and features on every title I’ve mentioned (including unlimited continues) ensures that no gamer will feel overwhelmed by the intense difficulty they often present which, again, is perfect for the mobile gaming arena.  So, if you have yet to experience bullet hell, turn off Angry Birds and give something new a try.  Unfortunately, neither Cave or Taito have produced anything for the Android market, but there was a recent update of Espgaluda II which changed the title of “iPhone mode” to “Smartphone mode”.  Possibly a sign Android users will see a port of this classic soon?  We’ll keep you posted. 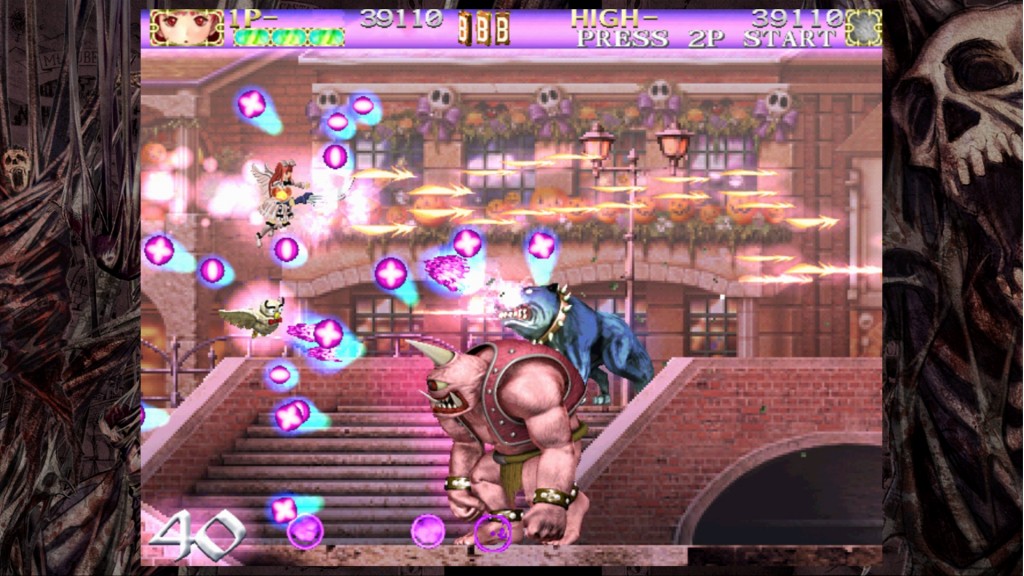