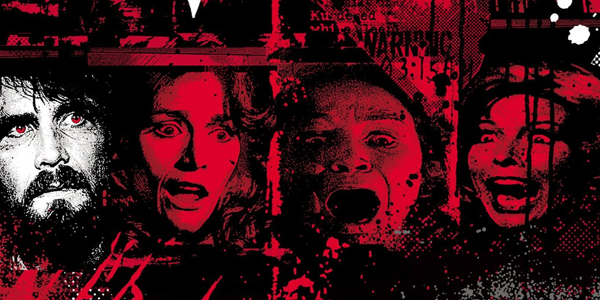 Just in time for the obligatory horror movie marathons that film lovers are sure to be running up through Halloween, Scream Factory (an imprint of Shout! Factory) have released a box set featuring the first three theatrical releases in the seemingly never-ending Amityville Horror franchise. 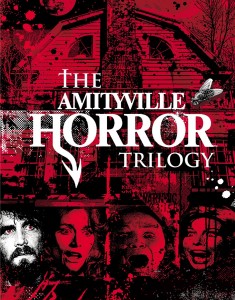 In a move squarely aimed at the fans, Scream Factory did this one right – simple packaging, surprisingly clean transfers, great bonus features/easter eggs, and a fair price point.  The set consists of three standard blu-ray cases packed into a slip-box and, while I love the fact that they went this route instead of making consumers fiddle with an over-extravagant fold-out insert, the outer cover artwork is unfortunately rather dull.  The red & black, high-contrast motif has been done to death, especially on films of this genre, and simply doesn’t do the set justice, giving it the air of a budget collection and thus underselling the quality of its contents.  Once the cellophane off however, fans will be most pleased with the choice of artwork gracing each of the three discs.  Each one features its original movie poster design on the front cover, which is the perfect choice seeing as a set like this is going to be sought out largely for nostalgic value.  Once you pop open each case, you’ll also be surprised to find they went the extra mile and printed full artwork (consisting mostly of a collage of stills from that film) on the underside of the insert.  Little touches like this make all the difference for collectors and it’s great to see the early Amityville films finally getting a deluxe treatment. 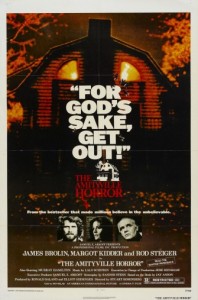 The original Amityville Horror is a classic through and through, and while it can’t hold a candle to many of the great horror films of that decade, there is no denying the number memorable aspects that come from the creepy imagery and haunting score presented throughout.  The infamous “fly scene” in which the house reacts to Father Delaney’s presence will always stick in my mind as one of my favorite sequences from the genre – not because it was overly frightening or intense, but actually because of the grim subtlety.  Watching the film now, as an adult, the melancholy atmosphere seems much more prevalent and I find myself enjoying the atmosphere director Stuart Rosenberg had created, more so than the manufactured scares.  Presented in an AVC encoded 1080p transfer in 1:85:1, the picture quality is about as good as it’s going to get.  On par with the prior blu-ray release from MGM several years back, there are still signs of age-related wear with specks popping up now and again and a consistent layer of grain but, for a fairly low-budget 70’s film, it looks damn good.  The image is sharp with nice, crisp detail, and colors look natural and adequately saturated.  The audio is where this disc really wins, featuring a lossless DTS-HD 5.1 mix as well as a 2.0 mono mix for the purists.  The 5.1 mix really enhances the film with a brilliant directional separation of the many audio elements, from slamming doors to screams to ambient effects; the audio is natural and quite immersive.  Even while the bass is a bit soft, the track sports a great dynamic range (which further accentuates Lalo Schifrin’s fantastic score) – Amityville Horror has never sounded better.

Where the MGM release of the first film really dropped the ball was the lack of extras.  Scream Factory packs this disc with audio commentary by the author of “Murder in Amityville,” a still gallery, an interview with the composer, as well as a short retrospective with James Brolin and Margot Kidder in which they talk about the film’s production and a bit about their own careers (all presented in HD). 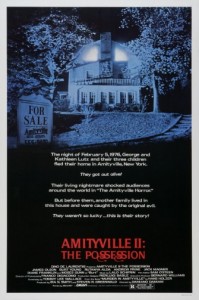 Amityville II: The Possession, which is arguably the most entertaining film in the set, also benefits from the strongest video and audio transfer of the three.  The image is less noisy, there’s better contrast, and accurate colors – likewise, the audio is clean and again benefits from excellent use of directional audio and surround activity.  Continuing the storyline of the demonic house on 112 Ocean Ave, or rather preceding it, this prequel introduces audiences the ill-fated Montelli family, one of whom is possessed and undergoes some radical mental physical changes.  Taking obvious cues from The Exorcist, Amityville II creates a steady mood of uneasy dread and has actually aged fairly well, with a couple disturbing scenes that still hold some shock value.  Included in the disc’s wealth of bonus features are interviews with actresses Rutanya Alda & Diane Franklin, audio commentary with “professional” ghost hunter Alexandra Holzer, a discussion with Alexandra Holzer (regarding Dr. Holzer’s research and books), an interview with screenwriter Tommy Lee Wallace, a brief discussion from actor Andrew Pine, and a featurette in which the late director Damiano Damiani talks about his involvement and his creative approach. 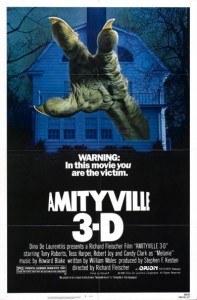 Rounding out the set is Amityville 3-D, obviously the weakest of the trilogy and made to appeal to a wider audience by taking advantage of the then-popular (and now, inexplicably, popular again) 3D fad and earning only a PG rating.  The set up here is that a skeptic, played by Tony Roberts, buys the infamous house to prove that nothing is amiss – but before long, all manner of odd occurrences begin to befall him and those around him.  The movie is still full of campy nostalgia and is worth a place on any collector’s shelf, but watching it can be tough on the eyes.  Due to the technology at the time, the 3D effect creates some odd outlines around object (regardless of whether you’re watching it in 2D or 3D) and objects in the foreground often look detached from the rest of the frame.  Still, it’s nice that Scream Factory actually made this available in its original 3D glory for the first time ever in a home video format.  While the MVC and 1080p 2:35:1 transfers look softer than the previous two films, the audio is perfectly serviceable.  The only problem that popped up now and again (which may be an issue with the source material itself – I’ve never seen the film on its theatrical release) is that lip movement was not always in sync with the dialogue.  Aside from the trailers and stills gallery, the only extra to be found on the third disc is a ten minute interview, presented in HD, with actress Candy Clark about her experiences on set.

Fans of the Amityville franchise and horror enthusiasts alike will be clamoring to get their hands on this set, perhaps if only for the first two chapters of the trilogy.  The presentation is elegant, the films look and sound better than ever, and are loaded with high-definition bonus features – a perfect set to grab for some old-school scares this during Halloween season.