Skeletor Sets Out For an Evil New Adventure 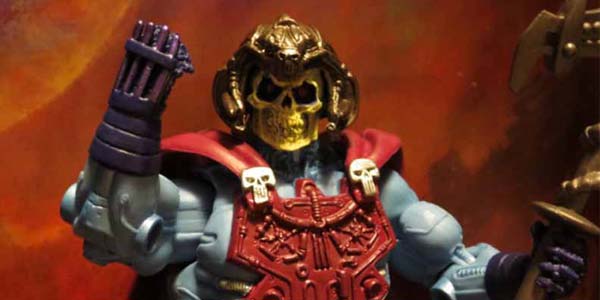 I don’t know how many of you guys would agree with me, but I think New Adventures is the best sub-genre being covered by Mattel’s over-arching Masters of the Universe Classics line.  I always had a soft spot for the space opera goofiness New Adventures infused into the (already goofy) He-Man mythos, and I think Mattel has done a great job weaving it all together into one cohesive storyline using nothing more than the character bios on the backs of each figure’s card.

The New Adventures sub-set has also features some of the most intricate and highly detailed sculpts in the line, allowing the Four Horsemen to really flex their considerable design muscles with loads of new parts that add a decidedly sci-fi flair to the MOTU fantasy aesthetic.

In short, New Adventures is awesome and Mattel has been killing it with the toys. 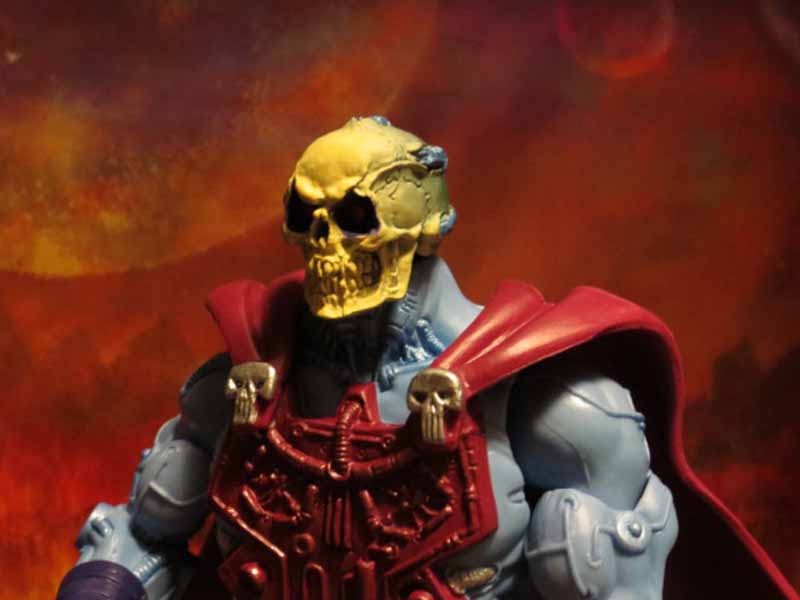 If you think this is all building up to some horrible twist ending, that New Adventures Skeletor somehow bucks the trend of well realized, unique figures in this series-within-a-series, sorry to disappoint you, because this is one solid Skeletor figure.  He-Man may have grown a sick 90s ponytail when he left Eternia for the deepest corners of the galaxy, but Skeletor had him beat– he became infected with a techno-virus that sort of turned him into a creepy cyborg, and also somehow made his cartoony yellow and green skull face into a much more realistic bone colored visage, because reasons.

That part doesn’t matter nearly as much as the fact that the New Adventures Skeletor nails this design update.  The cybernetic adornments on Skeletor’s blue skin are highly detailed, wonderfully asymmetrical and actually quite painful looking, which lends a great creep factor to the villain.  I love the new portrait, as well, which trades the iconic simplicity of the classic version for a much scarier visage that could easily provide the cover art for any number of metal bands past and present.

But this Skeletor adds in a little bit of prog rock with his removable warlord helmet and skull staff, both rendered in a nice gunmetal grey that offsets the blue skin and purple cape of the figure quite strikingly.  Skeletor sports a large, billowing cape, which looks great, although its heft and rigidity do inhibit the figure’s range of motion somewhat.  Aside from this, Skeletor sports the typical MOTUC articulation, including some decent range in his neck joint.

The detail in this sculpt is great, and the overall effect makes for a frightening new variant to our main villain.  My only beef, aside from the stiff cape, is the torso.  Rather than sculpt a new body with Skeletor’s cyborg chest plate and creepy exo-spine, the figure features a soft rubber vest overlay, which seems too bulky for the rest of the figure’s proportions.  We saw a similar issue with the tunic on bro king Seahawk and aquatic leader (?) Hydron, but the effect is even more glaring here, as Skeletor’s overlay is technically still supposed to be his body.  The sculpting is so well done I’m willing to forgive this design flaw personally, but if you’re not into a slightly too fat Skeletor, you may be left wanting. 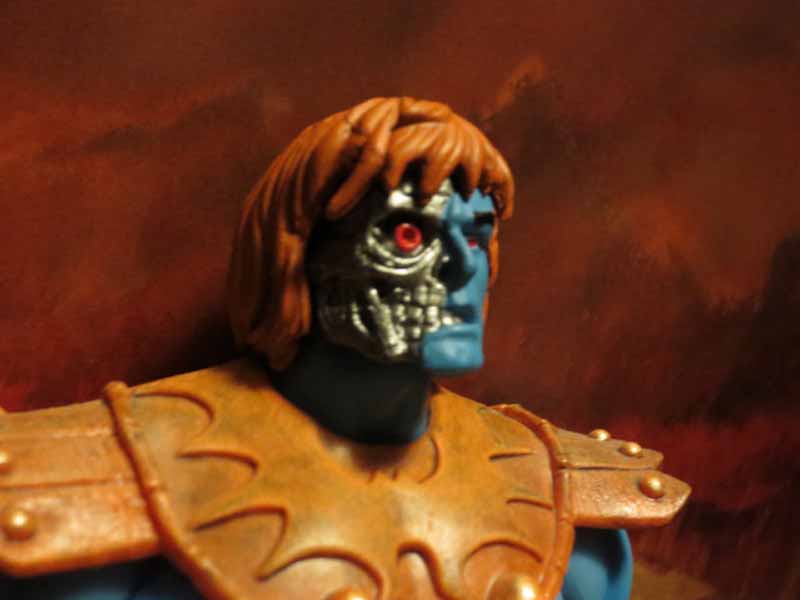 So we’ve got a cool looking figure, mostly well executed, featuring tons of new sculpting, who helps round out one of the cooler corners of the MOTU universe.  That would make Skeletor a win anyway, but Mattel goes the extra mile and packs an alternate Faker head with this figure, too!  The Faker head pulls a classic Terminator move, with half his synthetic blue skin ripped away to reveal his robotic skull underneath.  It’s a very cool design, and fits very well on the Faker figure’s body.  The skin tone matches perfectly, although the lack of a black wash in the new Faker head’s hair means those two hair tones are very disparate.  I’m okay with that, since the hair is self contained to each head, and because the exposed robot skull makes this villain so much cooler to look at.

As a New Adventures fan, I couldn’t possibly be happier with this Skeletor.  He looks great on his own, or leading his Space Mutants into battle, and he even packs in a very neat accessory for another figure, which adds more flair to the classic villain shelf.  Simply put, New Adventures Skeletor may not be perfect, but with so much thought and effort on display on making this guy great, he is easily worth the hefty price tag of the figures in this series.  And I couldn’t be happier to have him as part of my collection. 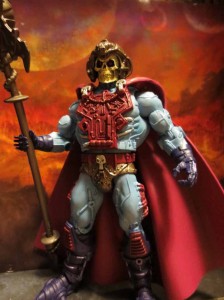 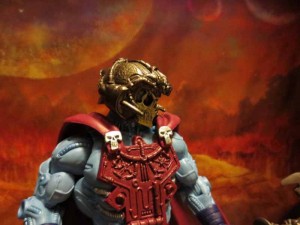 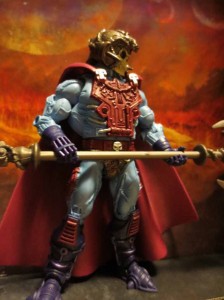 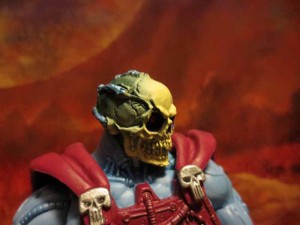 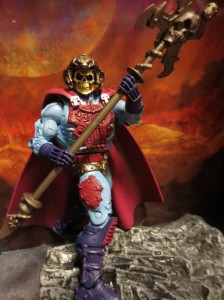 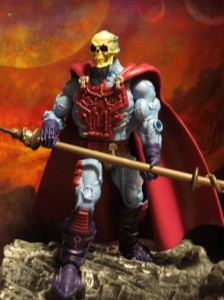 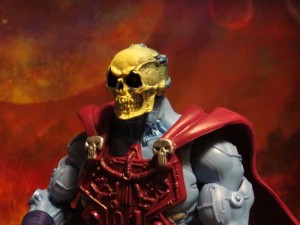 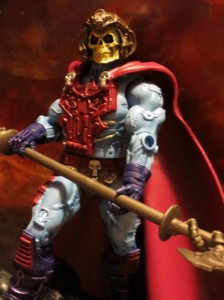 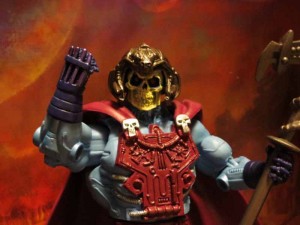 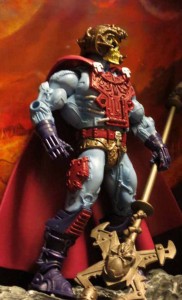 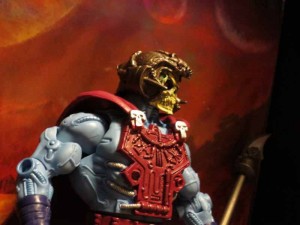 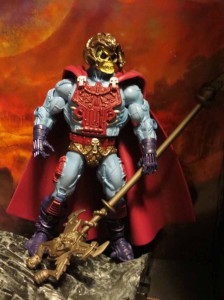 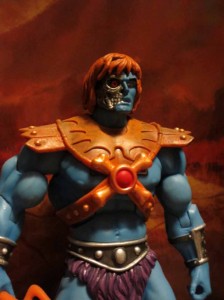 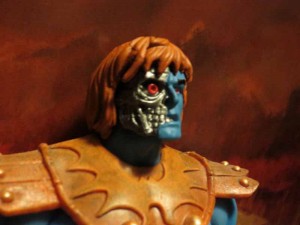 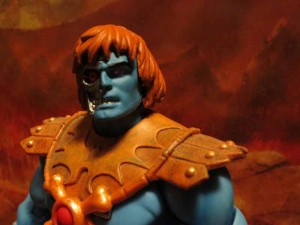