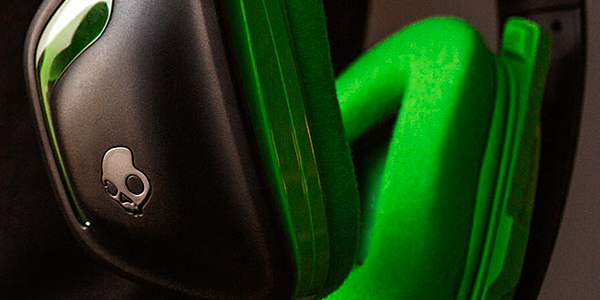 Anyone who’s serious about gaming will tell you the importance of owning a high-quality headset.  Skullcandy has been a key name in headphones and portable audio for over a decade so, when I heard they had developed a headset exclusively for the Xbox One, I had to give it a try. 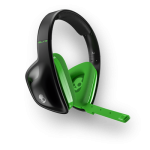 Peripherals and accessories, specifically well-designed headsets, for Microsoft’s latest console were slow to appear following its launch and wearing the voice communicator that comes packaged with the system is extremely uncomfortable, especially during longer sessions.  Astro’s phenomenal A50 headset has served as one of the best personal audio entries for the Xbox One with it’s wireless connectivity, comfortable design, and simulated 7.1 surround sound capabilities.  That said, they also run $300, which can be a lot more than many gamers are able to slap down.  Most of the budget-conscious units available, however, leave a lot to be desired — I found the official Microsoft set to be ill-fitting and somewhat shallow-sounding while the Polk 4 Shot, even with its excellent bass response, had an abysmal microphone for chatting.

Thankfully, Skullcandy’s SLYR headset delivers a solid, well-rounded package for under $100.  Unlike some of the bulkier models that feature cans that fit around your ears, The SLYR is an extremely lightweight design with heavily padded ear cups that snugly sit on top of your ears — so light in fact, you may forget you have it on in the middle of a gaming session, which contrasts the unfortunate heft of many of the wireless sets.  What really surprised me though was the actual sound quality in both in-game audio and voice chat.  Running through more action-oriented titles like Battlefield: Hardline with the SLYR was a joy as explosions and gunfire were punchy and teeth-rattling without distortion, even at high volume, while the more subtle audio cues of footsteps and ambient effects still came through with precision.  The low-end response in particular in the SLYR actually outdid Polk’s sets in my opinion. 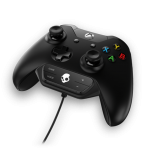 Similarly, the voice communication worked exactly as it should.  The mic is housed in a slightly flexible frame and tucks into the body of the headset itself when not in use.  When in its downward position, it’s long enough to sit in line with your mouth without extending far enough to be a distraction.  My voice came through crystal clear in all sessions and I could hear my teammates well, especially since the GMX-1 Mixer made it easy to adjust the game/chat volume ratio on the fly.  The mixer is mounted directly on the Xbox One controller and connects to the SLYR headset via a 3.5mm cable.  The left two buttons dictate the volume mix between game and voice audio while the buttons on the right control the overall volume level.  There’s also a Skullcandy logo situated in the middle that looks decorative but actually serves as a color-changing mute button.

I had mentioned previously that the set fits snugly on top of your ears, which is huge because, while I have to be careful with my A50s (which will shift around or fall off if I swing my head around too fast), the SLYRs stay put while still being breathable.  My ears didn’t feel too hot or sweaty even after an extended session.  Skullcandy’s trademark logo is situated on the ear cups which also feature a transparent window around the outer edge.  Combined with the jet black/bright green color scheme, the piece has a futuristic aesthetic which almost paying homage to the colors prevalent on the original Xbox console.  The construction feels sturdy for a lightweight set, size adjustment is a breeze, and the set up is as simple as connecting the mixer to the controller.

Skullcandy’s SLYR offers superb audio range and quality for a stereo headset and, at under $100, it’s one of the best values in the Xbox One headset market.  Available nationwide at select retailers and directly from the manufacturer at skullcandy.com, the premium features, killer design, fantastic mixer hardware, and superior sound quality make this a standout piece in a crowded market.