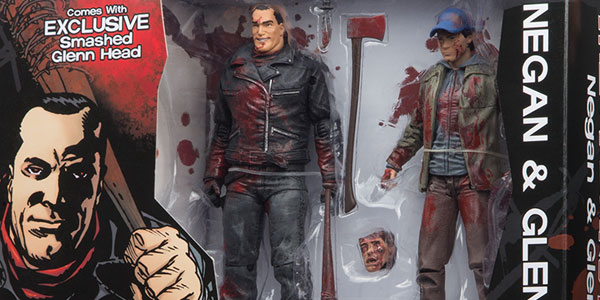 Every year, Skybound and McFarlane Toys team up to bring an exclusive Walking Dead action figure to San Diego Comic Con, and this year they’re shaking things up a bit, with a box set two-pack of figures.  The set is based on the infamous Issue #100 of the Image Comics series, and includes blood-splattered variants of Negan and Glenn (a part of the upcoming wave of comic-inspired figures due out this summer).  Each fully poseable figure features a unique, gory paint deco, an accessory (Lucille for Negan, and an axe for Glenn)… plus an alternate, bashed-in head for poor Glenn after he meets the business end of Lucille up close and personal.

Yup– the SDCC exclusive is Glenn, as he appeared in the tragic, stomach-twisting moments before his demise.

That being said, this is a great concept for a Con exclusive, especially because that gruesome headsculpt probably wouldn’t fly at retail, even for a boundary-pushing company like McFarlane.  ComicBook.com had the exclusive reveal of this set earlier in the week (Click Here to see more images, including the Black and White variant).  I discovered it on SDCC Blog, which has become THE go-to website for any details you could want about this summer’s show.

Now I’ve gotta go regain my composure, all over again… Thanks for that, Skybound.