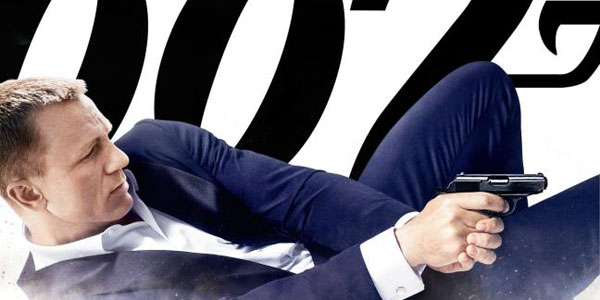 The latest James Bond movie is a big win, one of the finest chapters in the 007 series.

Skyfall was awesome, but based on the HUGE opening weekend numbers– you probably already know that. I missed my review screening last week thanks to a stupid Nor’Easter, but the latest Bond movie is so good, I want to write about it anyway.  And the biggest victory of the film is its uncanny ability to mesh the old and the new– director Sam Mendes and Daniel Craig have created a Bond film that ties together the grounded, Bourne-esque elements of the last two films, with the broadest of spy movie cliches, and not only does it all work– it feels fresh, and new and entertaining.

Part of this success comes in the simplicity of the story. Skyfall is a fairly straightforward Bond adventure, focusing mainly on the agent’s strained relationship with M (Judi Dench).  Fans of Dench will be pleased, as the formerly matronly MI6 leader finally steps into the spotlight here, and the wonderful actress brings some new levels of complexity to M that we’ve never seen before. The film begins with M making an impossible– and wrong– decision, leading to Bond’s apparent death at the end of a thrilling chase on a train.  Of course, 007 is far from expired, but M’s call is a resounding betrayal in his mind, one that haunts him throughout the film.  After a brief “vacation,” Bond returns to service, despite his hostile feelings toward M and MI6 in general, embodied by Ralph Fiennes’ agent turned bureaucrat Gareth Mallory, in the wake of a terrorist assault on MI6 in London.

The attack was orchestrated by new villain Silva, played by Javier Bardem, who finally feels like a villain worthy of Craig’s edgy secret agent. Silva is a dark mirror to Bond, cut from the same cloth as some of the best villains in Bond history– from his over the top wig, to his wonderfully grotesque deformity, to his very personal vendetta against M, Silva is established as an odd yet incredibly dangerous presence from his first scene on, and Bardem’s screen presence makes him more than a match for our hero.

Fortunately, Bond has a new set of allies for this go-around, including Naomie Harris’ Eve, the former field agent who accidentally shoots Bond, and Ben Whishaw as the new Q, whose few scenes here are so entertaining it left me incredulous how we got through the two previous Bond movies without him.  Craig has an amazing chemistry with every character– I loved his curmudgeonly, old school attitude when dealing with Q, who looks like he’s no more than 25, but it’s Bond’s romantic chemistry that really takes this movie in interesting places.  The connection between Bond and Eve is perfectly realized, and leads to a pitch perfect reveal toward the end of the movie, and Bond’s encounters with Silva’s henchwoman/ hostage Severine, and especially his sexually charged back-and-forth with Silva himself are fantastic.

I love all the trappings of the classic Connery/ Moore era Bond films, with their high tech gadgets, larger than life villains, secret islands and air of impossible cool, but I didn’t feel like I was missing any of these things from the more harsh and realistic tone of Casino Royale and Quantum of Solace.  Having seen Skyfall, I’m now realizing how sorely missed these Bond tropes have been– in addition to Q (and maybe another long-time supporting player that I won’t spoil here), Skyfall is packed with clever new takes on many spy cliches.  There’s a secret island fortress that serves as Silva’s base of operations. There’s disguises, and some practical gadgets for Bond… much more lavish tech employed by Q in MI6’s makeshift headquarters… and a damn fine Aston Martin that’s packing some surprises of its own. There’s plenty of flirting between Bond and a bevy of characters, and moments of classic Bond cool that were so perfect– like leaping onto a moving train and landing while fixing his cufflink– I found myself grinning uncontrollably.

Director Mendes has made some great movies before, but Skyfall gives him the chance to really flex his action muscles, and the result is a series of wonderfully staged and confidently shot scenes. There’s no muttled confusion to the action on display, be it the great train chase that opens the film, all the way to the assault on Bond’s homestead during the finale. The action is clear and capable throughout, woven nicely into the very character-based story as Bond struggles with his allegiance to M, while defending her from another former agent who has given in completely to his own hate toward his former employer, to the point that he will take down an entire country just to get to her.  The movie is also completely beautiful to look at, with a trippy, atmospheric opening sequence (that’s so cool it makes Adele sound good), and some lush cinematography courtesy of the legendary Roger Deakins.

A scene in Macau in which Bond attempts to subdue an assassin working for Silva is breathtaking, as the two opponents are silhouetted against the bright, saturated lights of the city, from about a hundred stories up. It’s a thrill to watch, like so many moments of this film, and feels completely timeless– unlike Casino Royale‘s already-dated parkour sequences, the action in Skyfall feels like it could have stemmed from any one of Bond’s best adventures.  Combined with the compelling, character-driven story, a cast of fantastic actors and a uniquely modern take on so many classic Bond elements, Skyfall really does feel like a perfect modern Bond. It’s fresh and smart and relevant, with an obvious affinity for the campier concepts behind the super spy’s history, and most importantly, it’s a completely entertaining and engrossing ride.