SKYFALL Gets A Stylish Character Poster 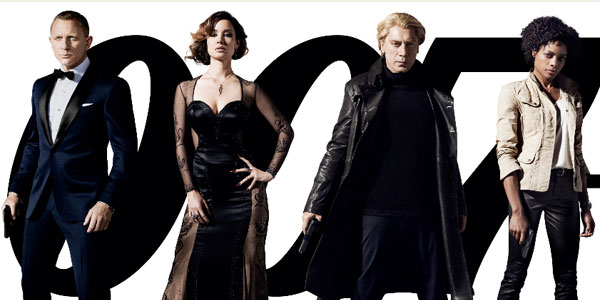 Bond’s new cast goes all high fashion for their new character reveal banner.
It’s more than two months still until Bond makes his return to the big screen, but the recent flurries of trailers, spy reports and Olympics cameos has me feeling pretty good about SKYFALL.

The new movie banner is no exception, offering some character portraits for 007 and three of the movie’s new characters, decked out in some stylish threads.

Seeing this image of Daniel Craig’s Bond, in a svelte blue tux, should finally extinguish the fears that our favorite spy would be unkempt and scraggly for most of this go-around, but the new image looks a little too clean to me (is there really such a need to Photoshop the Hell out of his face?).

Bérénice Marlohe looks absolutely poured into her black dress, and this photo is reason enough for me to believe her Severine should make a promising addition to the women of Bond… Naomie Harris plays Eve, the other new leading lady, whose leather pants seem to belie her field agent status.

I think this might be out first official still image of Javier Bardem’s Silva, and he looks badass in spite of that ridiculous wig. With such a great track record of iconic roles and the little pieces we’ve seen so far, I’m really hoping Silva is a step up from the relatively small-scale villains of Craig’s other Bond movies… I’m fully confident that Bardem has what it takes to pull off a Bond villain up there with the likes of Goldfinger or Scaramanga, as long as he’s got enough character to play with.

So all things considered, SKYFALL is looking pretty damn good.

To check out a larger version of the image, Click Here.