When I first went hands-on with Sleeping Dogs at PAX East, it felt like it had the makings of a comprehensive free-roaming action game with a great setting. Now that I’ve sat down and experienced everything it has to offer, it has thoroughly blown me away. Read the full review to found out why.

It’s no secret that Sleeping Dogs was at one point being developed as the next entry in the True Crime series. United Front Games has to be commended for going forward with this game as a standalone property and releasing it with Square Enix in a world full of established IPs like Grand Theft Auto and Saint’s Row.

More importantly though, the Canadian developer should be commended for making this game so ridiculously awesome.

Sleeping Dogs begins like any great crime drama, introducing us to the main character and his world by throwing us headlong into a random night in his life. Wei Shen, an undercover cop working for the Hong Kong Police, is carrying out a sting operation and it all goes south pretty quickly, leading us into a tense chase sequence/tutorial for the controls.

No doubt taking some inspiration from the classic Chinese crime-thriller Infernal Affairs (which was the inspiration for Martin Scorsese’s The Departed), the story follows Wei down a twisted path of deceit and violence as he infiltrates the Triads and risks his life constantly. He enters one particular gang, the Sun On Yee, through his childhood friend Jackie, and works his way up the ranks by taking huge risks and earning the respect (and fear) of everyone around him. As he becomes attached to the gang members and has an increasingly hard time balancing his two very distinct lives, the story takes on some weight and completely takes hold of you.

While most of the supporting characters are just that, Wei himself is a fully realized and complex character fully capable of carrying the 20-plus hour story on his tattooed shoulders. He’s often more volatile and unpredictable than the Triads themselves, and trying to understand his motives adds another layer to an already dense storyline. His friend Jackie is also a great character who serves as Wei’s emotional opposite; he’s a longtime member of the gang who can’t sleep at night when he’s finally pushed to kill someone about halfway through the story. He clearly joined the gang just to feel like he belonged to something, and hearing him talk to Wei about his plans for the future is both uplifting and heartbreaking, given the circumstances. 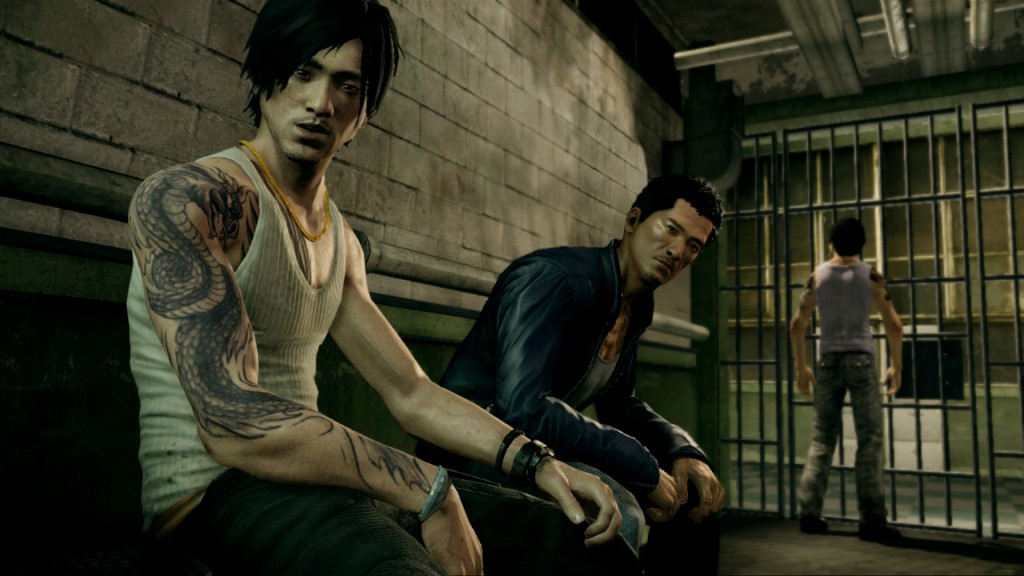 This might all sound deadly serious, but this game has some truly hysterical moments scattered throughout. The optional missions, called “Favors,” can really bring the laughs. For instance, you might have to smash up a cheater’s racecar with a tire iron. When the car’s owner confronts you, the next command is to destroy him with the same tire iron.

The excellent story serves as the backbone for some truly great gameplay. You can take on Triad missions and HKPD missions, which advance the story and task you with some really diverse objectives. Police cases usually task you with slower-paced objectives, like putting on a disguise and investigating crime scenes or planting bugs. Most mini-games that accomplish these and other tasks — cracking safes, hacking cameras, triangulating cell towers, etc. — are done with your in-game cell phone, and they’re all good fun.

The Triad missions are generally more fast-paced and violent, involving either a car/motorcycle chase, fisticuffs or a gunfight. Often you’ll be faced with all three, as missions seamlessly transition from one to the other. The sleek combat system is intuitive and robust. It relies heavily on timing counterattacks and making use of the environment for some absolutely brutal kills. It’s strong enough to be the basis of a game on its own, getting deeper and more fun to use as the game progresses. 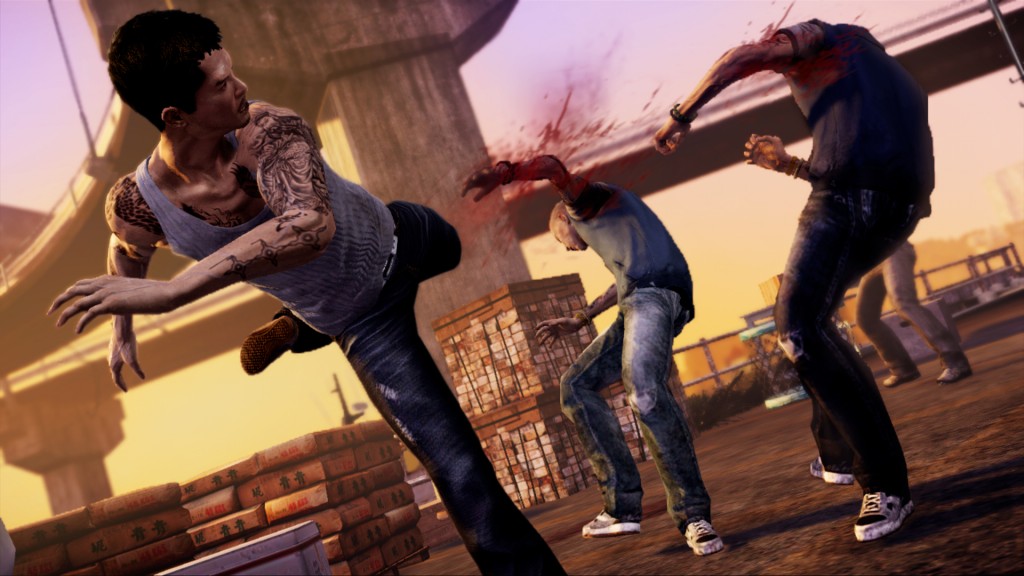 Luckily for us, Sleeping Dogs also packs some incredibly fun arcade-heavy vehicle controls with a real sense of speed. It’s exhilarating to beat down a bunch of thugs, blast through a couple of rooms using a bullet-time-esque slowdown mechanic (making you feel like a badass from a John Woo film, of course), jump on a crotch-rocket and chase a vehicle down while shooting out the tires of your pursuers, resulting in glorious slow-mo crashes.

Aside from the story, there’s plenty to do in Hong Kong. You can steal marked trucks for money, shop for clothes that can boost your stats, bet on cockfighting matches, find health shrines that increase your maximum health, go on dates, sing karaoke…it’s all there.

This has all been done before in separate games, but never before has an action game melded so many awesome mechanics and handled them so well. The intense on-foot chase scenes through the Hong Kong streets and over the rooftops reminiscent of the great L.A. Noire? Check. The insane high-speed car hopping from the not-so-great Wheelman? Check. Even some really small innovations, like quickly scrolling through missions by clicking the left control stick, help to set Sleeping Dogs apart. 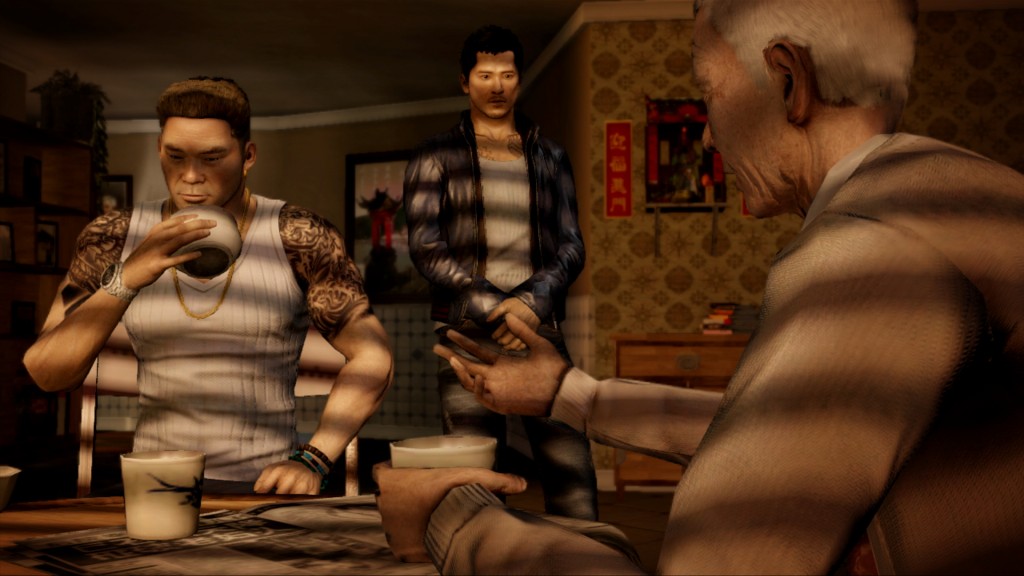 My only complaint about Sleeping Dogs is the lack of a solid checkpoint system. Many missions are broken up into several fights with large groups of enemies, some of which can be challenging and time-consuming. Missing one too many counters in a fight near the end of a mission will often bring you all the way back to the beginning, which makes for a lot of lost time and effort. It seems like an oversight in a game otherwise packed with smart decisions.

Taking notes from the best open-world action games of recent years and besting all of them, Sleeping Dogs is a totally brilliant experience. Everything from the soundtrack to the voice acting, the combat system to the vehicle controls, the light RPG elements to the engaging storyline, make this a game that anyone would be foolish to pass up. Now we just have to wait for all that upcoming DLC.