Sneak a Cinematic Peek into Warlords of Draenor, the New Expansion for World of Warcraft 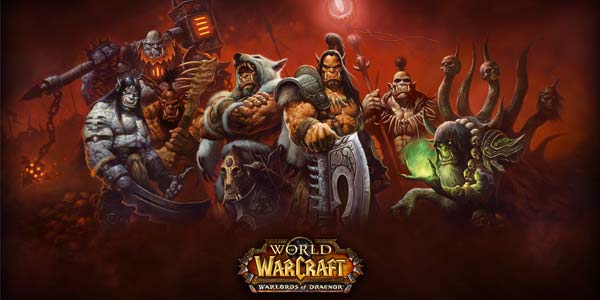 Warlords of Draenor, the fifth expansion pack in the World of Warcraft games, released its cinematic trailer and release date last week, and it amps up players old and new to experience fresh dungeons, a new continent, and a level cap of 100.

The trailer and release date for the new World of Warcraft expansion was debuted over a week ago, and this is my first time watching it. I have been playing World of Warcraft since I was 16 years old, and I just turned 24 a month ago. I started playing during vanilla, and each expansion breathed new life into my obsession with this game. My favorite expansion was The Burning Crusade, and after that every other expansion could not compare. That is why it took me a week to watch the trailer. I suppose I was nervous that it wouldn’t engage me the way I’ve always been hooked back into the game. Have you ever been so excited for something that you avoided it for fear that it wouldn’t live up to your expectations? This is the case for the trailer. A lot of people complain about the expansions falling flat after BC, and while they didn’t excite me in the same way that BC did, I had no complaints. I can find optimism and fun in really anything, so I did not have the same qualms that people did with the following expansions since BC. Perhaps it has to do with age as well, because I started playing BC in high school, before I learned to prioritize important things, or learned the self-control to not indulge in 12 hour gaming sessions. I completely immersed myself in BC, where with the other expansions I simply waded through the water with. I have experienced raiding, rated pvp, and everything in between. But I found myself able to walk away from WoW for long periods of time, and not being a complete fiend for the game negated any nostalgia I had for the game in the beginning. I remember first playing as a group with my two brothers, and one of my brother’s ex-girlfriends. We leveled together, did dungeons together, even did battlegrounds together. I remember the frustration of spamming chat, LF2M tank and healer, whereas now you can queue up and pop in, all in less than five minutes. World of Warcraft was the first game I became completely obsessed and dedicated to, and I think that is why it is my favorite of all time. It is all I talked about, all I read about, all I cared about. Those parodies about WoW being completely addicting and life ruining? Not even an exaggeration! 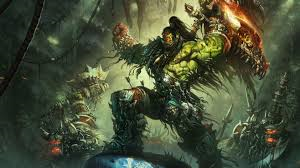 Now, the cinematic for the game is really just there to get you pumped for the expansion. All it really offers is insight into the theme for the new game. Essentially, Warlords of Draenor, the name of the fifth expansion for World of Warcraft, is about the Orc upheaval and refusal to be slaves; they seek to conquer land, and prove themselves as a race. The cinematic, as it always does, beautifully amps up the viewers for the game. The video is so gorgeous, and thrilling, and it immerses the player into the world.. of Warcraft. If you’ve quit WoW for a period of time, vowing never to return, do not watch the cinematic. If you’ve chosen your family, and friends, and complete sanity over the game, do not watch this video. If you did not heed my warning, I completely understand. 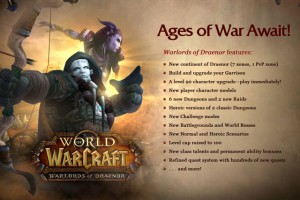 After watching the video I had to delve a little deeper to see what the game would include. One of my favorite things about the game is the new dungeons. Therefore, I was excited to see they would be adding seven new ones. I am a bit of a loot junky myself. Let’s clear that up; I do not steal, or use loot that I do not need. But if it works for me, and it’s a beautiful upgrade, I want it. Plus, I love new item designs, and seeing how they look on each character. Therefore, new dungeons, with new bosses to slay, and loot to grab, excites me the most. That was a plus for me. The new expansion also boasts a new continent, Draenor, with new pvp zones as well as new battlegrounds. The level cap is now level 100, which seems a bit daunting for new players, but Blizzard does new things with the expansions that make me appreciate the game; they design ways for new players to catch up. The game has been out for a decade, so imagine just starting the game and having to catch up to each player who has been playing since its release date. That is a great feat, and deters a lot of people away from playing the game. However, Good Guy Blizz likes to add little boosts for players to help them catch up, and this expansion is no exception. With a boost to level 90, there’s really no reason NOT to get back into WoW. Unless you have a job, a family, a house.. Really anything that can’t be neglected for long periods of time. Except how can something so wrong feel so right? Exactly. Get the expansion, folks. If you quit, here’s a perfect time to reengage yourself. If you’ve never played, it’s not too late! If you just don’t like WoW? You must have been playing a different game.

Here’s a video to change your mind: