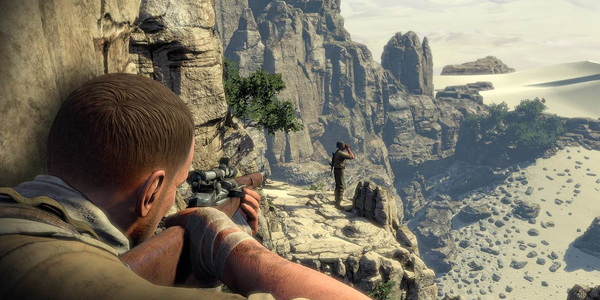 Sniper Elite III, the newest effort from Rebellion Oxford and 505 Games, revels in the macabre horrors of war and, like its predecessor, makes an art form of the grisly effects a bullet can have on the human body.

Anyone who’s played through 2012’s Sniper Elite V2 knows that the true draw of this otherwise mediocre shooter series is the super-slow-motion cinematic shots that highlight the carnage of a well-placed round.  The frequent use of this kill-cam is truly the only thing that makes Sniper Elite III a worthwhile venture as it simply never gets tiresome to watch.  The game expertly captures the intensity of patiently waiting, peering through a sniper scope and waiting until the perfect moment to squeeze off a shot on an enemy soldier who never saw it coming.  The camera speeds alongside the bullet as the accompanying audio of steadily swells to a roar, culminating in the moment of contact.  An x-ray cutaway of the target is shown as the bullet enters, shattering teeth, splintering bone, and generally making for a gory spectacle. 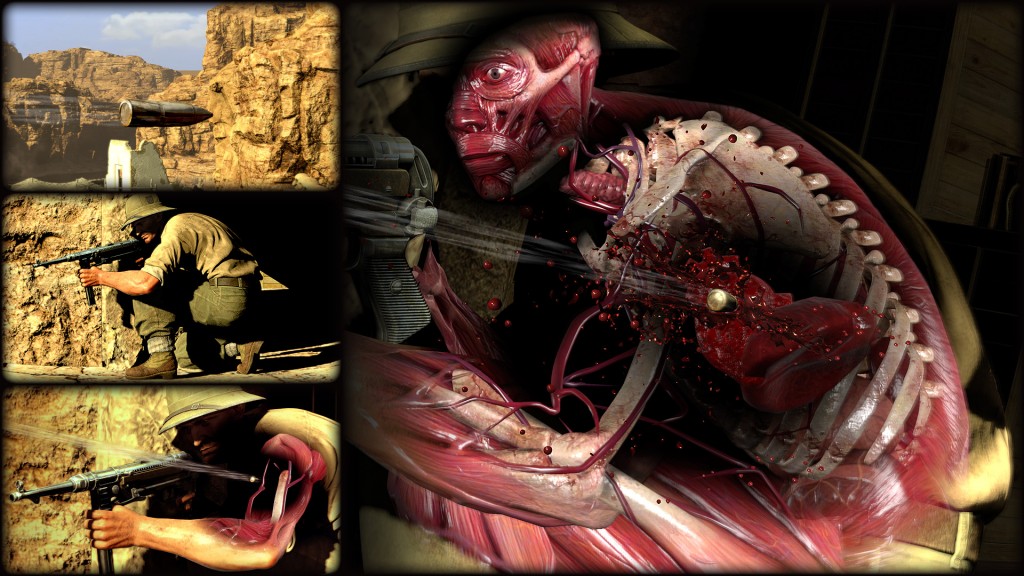 The payoff for these kills is so fantastic that the other weapons in your arsenal will likely not see much play, but there are a number of handguns and automatic rifles that players also have at their disposal if so inclined.  The game takes place several years prior to Sniper Elite V2 and centers around Karl Fairburne, an American sniper, as he takes on German forces in Northern Africa.  While the WWII angle has really been done to death, it’s at least a bit refreshing to see it based in a setting that seldom gets any attention.  Beyond dismantling the Nazi war machine, there isn’t a whole lot of compelling story here and the accompanying dialogue is pretty atrocious.  Each of the eight levels presented here provides a list of objectives and throws you into a huge open area.  How you tackle these tasks (many of them optional) is entirely up to the player.  This is in sharp contrast to the very linear, focused effort put forth in V2 and, while I’m sure many gamers love sandbox-style gameplay and wide-open environments to play around it, I personally much prefer the former. 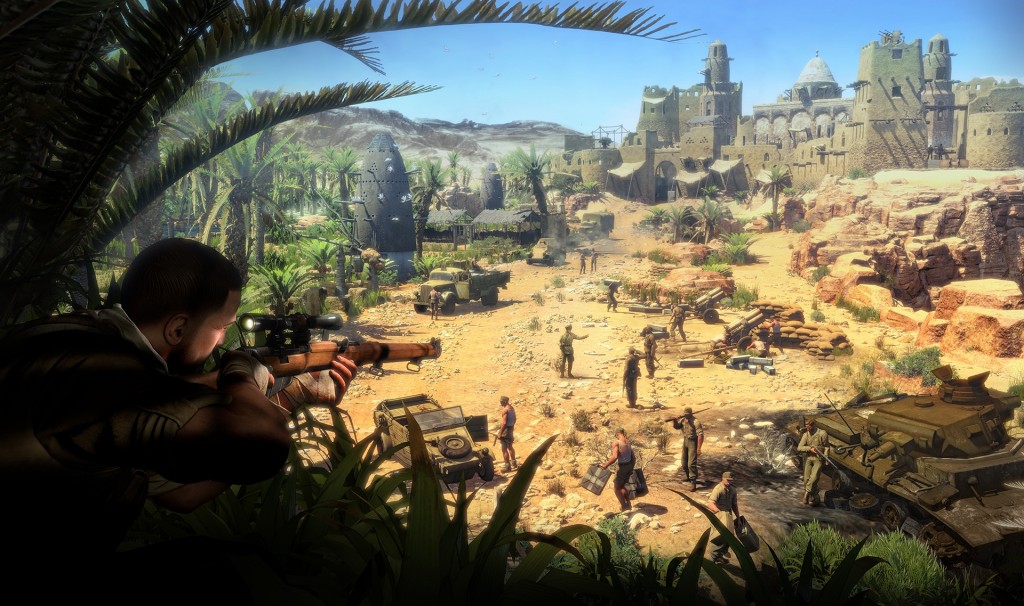 The uneven AI is another matter.  Some enemy guards appear to have superhuman perception are able to spot you from great distances if you break cover for an instant while others are completely unaware of your presence even as you run up right behind them.  Then there’s the matter of making noise.  While it’s usually ideal to fire a sniper rifle from a noisy area that can mask the sound of the shot, sometimes you will simply have to concede that guards will become alerted to your whereabouts.  Quickly relocating can confuse some guards (who immediately lose interest in tracking you down) while others will tirelessly pursue you to the ends of the earth like a T-800.  More often than not, it’s the first issue that will get you killed.  Enemies will usually notice you before you notice them and take you down before you know where you’re getting shot from.  Next time you enter the area in question, you’ll obviously be looking out for the enemy that got the drop on you but, even if it is an intentional design to force players into approaching the game with extreme patience, it saps the fun out of it.  Especially on the harder difficulties, the title becomes a constant trial-and-error slog to finish. 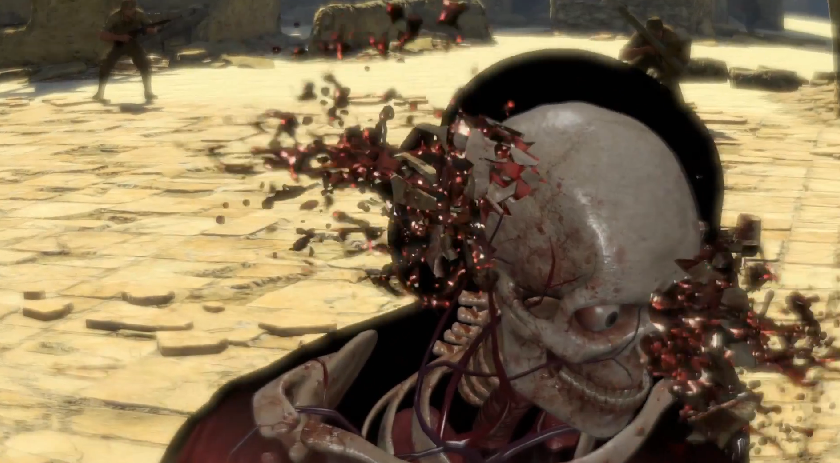 Sniper Elite III’s multiplayer maps are also huge and loaded with great perches and cover to hide behind and set up, emphasizing long-range cat & mouse tactics.  Two of the online modes, “Distance King” and “No Cross”, even reward teams based on the range of their kills.  The multiplayer suite is actually better than I would have ever expected from the title but, while enjoyable, it also doesn’t really bring anything new to the table either.  The co-op modes are also surprisingly playable, allowing friends to play through the entire campaign together or play the obligatory “Survival” mode to hold of wave after wave of enemies.  The coolest addition may be the “Overwatch” mode, which gives a pair of binoculars to one player and outfits the other with a sniper rifle, forcing the two to work together as a sniper-spotter team. 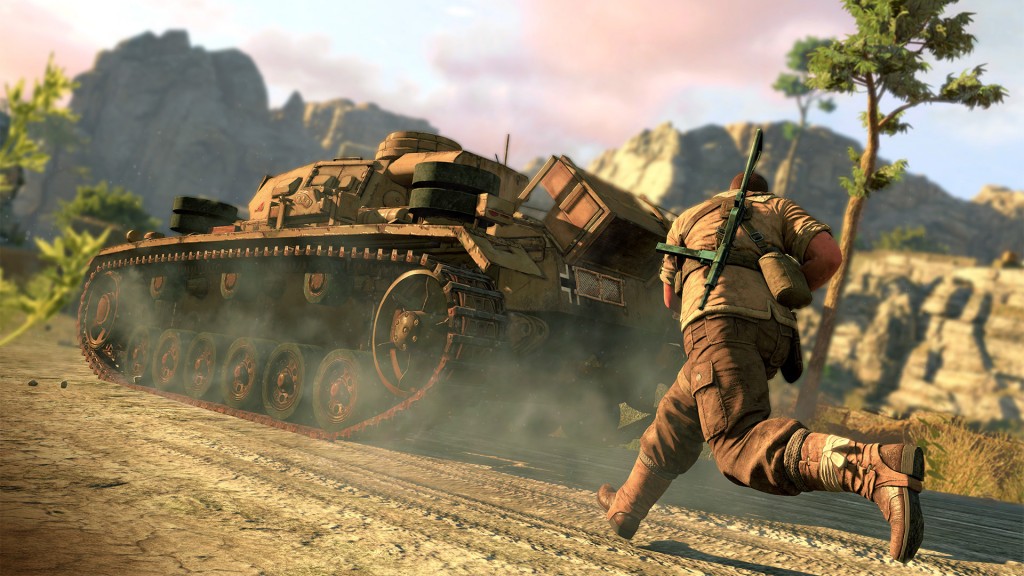 In the end, Sniper Elite III’s open level design and objective-based sandbox style of play offer more variety than previous titles in the series, but does away a compelling narrative and a purposefully paced experience — it really boils down to personal preference.  The centerpiece remains the jaw-dropping death scenes triggered by deadly sniper shots and this is still worth the price of admission, but don’t expect much more excitement during the 10-15 hour play time.  The visuals and audio are par for the course, but won’t necessarily wow anyone – especially those looking to really get the most out of their next gen consoles.  Sniper Elite III is out now for Playstation 3, Playstation 4, Xbox 360, Xbox One, and PC.