KaBOOM!, the award-winning, all-ages imprint of publisher BOOM! Studios, gets ready to send Snoopy off on a secret World War I mission this September in Peanuts: Where Beagles Dare!, a new, original graphic novel from writer Jason Cooper and artist Vicki Scott that serves as a great accompaniment to the upcoming The Peanuts Movie.

“Where Beagles Dare! is our fourth Peanuts original graphic novel and it continues to be an honor to work with Charles M. Schulz Creative Associates to produce these new stories,” said BOOM! Studios Editor-in-Chief Matt Gagnon. “With November’s The Peanuts Movie featuring a storyline in which Snoopy appears as the World War I Flying Ace, we thought it’d be appropriate to do a new, original story that could stand alongside the film! 2015 is a big year for Peanuts and we’re overjoyed to be part of the fun.”

In Peanuts: Where Beagles Dare!, Snoopy, the World War I Flying Ace, is on holiday in France but his leave is cut short when he’s recruited for a top-secret mission. Snoopy must dodge his way through no-man’s land, go deep behind enemy territory, and battle the Red Baron in the blackened skies above. Will Snoopy ever return home to quaff a few root beers with Woodstock and have dinner with Charlie Brown? Find out in this new original graphic novel, which also features nine pages of behind-the-scenes sketches by artist Vicki Scott!

The Peanuts: Where Beagles Dare! original graphic novel arrives in comic shops on September 23rd with a cover by Vicki Scott, Paige Braddock, and Nina Kester for the price of $9.99 under Diamond order code JUL151096. It will arrive in bookstores on September 29th under ISBN 978-1-60886-711-0. 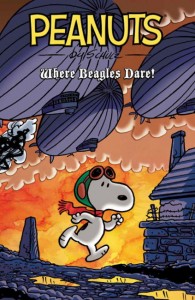 The Final Order Cutoff deadline for comic shop retailers is August 31st. Not sure where to find your nearest comic retailer? Use comicshoplocator.com or findacomicshop.com to find one! It’s also available for order directly from boom-studios.com.