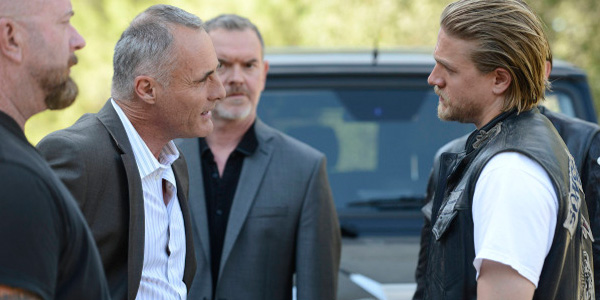 Are the roles in SAMCRO changing? Is Jax becoming Clay? Clay becoming Otto? Tara becoming Tara? And what happened with Tig? All the details are inside.

Show opens up Tig knocking on Jax’s door, and asking Jax if they are good? When the last episode ended it seemed like we had seen the last of the crazy member, but here he is standing face to face with the man who signed his death certificate. We find out that Tig may have a future thanks to Jax’s deal with the Irish.

Of course what is a Sons show without someone getting beat up, we get a classic retaliation beat down from the neo nazi group on Wayne who was left carved up and hanging by his arms from a lift. Jax calls a meeting to the table where weapons and the neonazis are discussed. The rest of the boys head off, leaving Chibs and Jax to talk about the club. Chib’s finally have a one on one where he tells Jax he is sounding more like Clay every day.

Meantime Tig, Juice, Rat, and Darby (the resident former Nazi who helped burn down Cara Cara) go on the hunt for the local neo nazi crew responsible for the opening beat down. Jax,and the rest of the crew go to meet up with the Irish cartel about getting out of guns for good. Refusing to let The Sons get out of Guns a scuffle between Jax, and Elliott erupts after Jax throws the first punch.The Irish Cartel settled the score at the gun warehouse with the club leaving Jax reeling , and ready for vengeance.

The monkey wrench in the show Jax’s ex Wendy. It opens up with her and Tara having a conversation about the things Wendy said to Gemma about Tara. She walks into Tara’s old hospital office with a dissertation of previous club business that she could recall. She and Tara are working on something to either destroy Gemma, and or the Club and Jax.

Toric still trying to scare Clay,who is still in solitary for the fight started in the last episode, into turning on the club. It has not worked up to this point has not worked on Clay, so Toric decided to up the pressure by promising Clay a visit everyday from Otto’s visitors in the season opener. Stepping on Clays hand tells him he needs to go to infirmary to have his arthritis checked out, taking Clay into see a broken Otto, causing Clay more pain seeing his club brother suffering. Clay walks over to Otto, and he hugs him telling him no more brother,sneaking Otto the shank given to him last episode. After Clay leaves Toric getting desperate now tries to get Otto to turn on Clay, since he is no longer a Son. Without giving too much away let’s just say justice was served for Otto and Toric.

This Episode felt like such a season finale leaving the question how can the show top this episode. Of course that’s been said since episode 1. Will Jax becoming more like the guy he ousted from the seat at the head of the table?