Music has always played an important role in video games. In the case of many classic titles, the soundtrack is what you’ll remember long after you’ve beaten them, whether they required you to hold a plastic instrument or not. Sound Shapes integrates music with gameplay in a breathtakingly refreshing way and finally gives the PS Vita (and/or PS3) its own unique gem that’s an absolute must-buy.

Sound Shapes wastes no time in throwing the player into its world. Upon initial start up, there’s a tutorial that shows you the basics of the gameplay and the level editor. After that you’re on your own, left to explore the five different worlds that are designed, both visually and aurally, by different artists. Jim Guthrie, Beck and deadmau5 all contribute fantastic mixes that change throughout each level and need to be heard with a decent set of headphones.

The easiest way to describe the actual gameplay of Sound Shapes is to label it a 2D platformer. You control a little blob who can stick to light surfaces, roll up into a ball to move faster, and dies when it runs into red surfaces. The actual description of the game is entirely different though, and it’s hard to even classify it. Each level is broken up into self-contained “rooms”, where the goal is to collect coins that add notes to the soundtrack. It could be a strum of a guitar string, an electronic sample, a hi-hat rhythm, a bass drum beat…the list goes on and on. This means that, in order to hear every facet of each level’s song, you have to collect every coin. It’s a great thing that the controls are so tight, because some levels require impeccable timing and strategy to avoid homing missiles, lasers and other devices that stand in your way.

Everything in the game makes sounds that contribute to the music, which takes the platforming gameplay to a whole new level. Instead of just using your eyes to determine when it’s safe to pass through the conventional platforming traps, you can listen to what beat it falls on and use that knowledge to progress. For instance, if a laser shoots from the ceiling on the second beat of a measure, you know that you can safely pass under it on the third beat. This takes what could have been simply a well-designed platformer and turns it into a brand new experience.

The visuals are charming and clean. Some levels remind me of an HD Loco Roco, while some are based on 8-bit designs. Each world is entirely distinct, but the level designs are uniformly fantastic. Each level being broken into separate areas always keeps the gameplay fresh, as it can shift from slow and methodical puzzle solving to a frantic escape sequence seamlessly. It also makes the difficulty manageable, offering plentiful checkpoints and assuring that lots of progress is never lost. 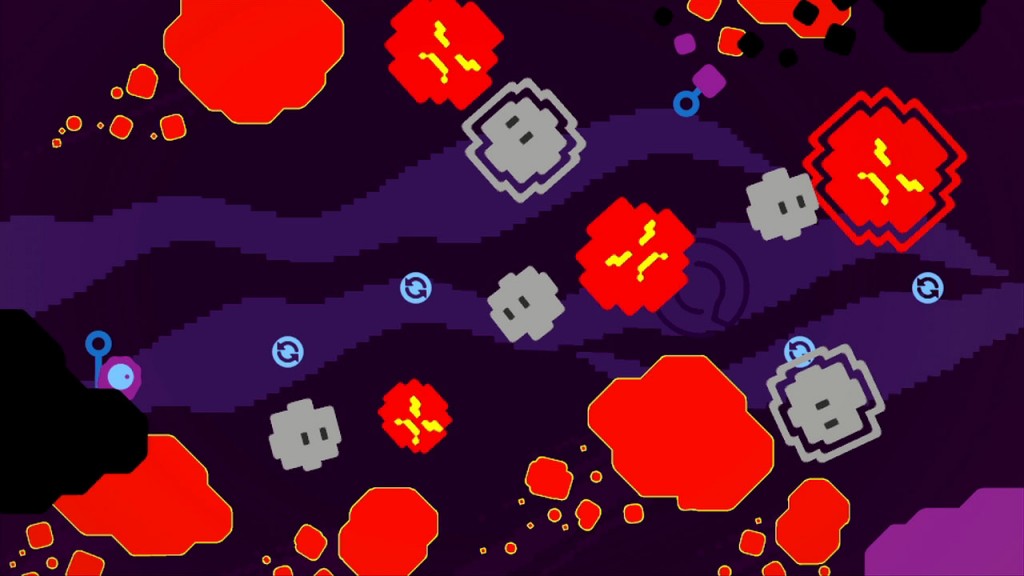 I also appreciate the small touches that were included, whether intentional or not. Being color blind, it’s impossible to distinguish red from green, which would be a problem in a game where contact with a red object means instant death. Every red object in Sound Shapes flashes, making it possible for color blind players to succeed. Very nice.

And then there’s the level editor. Upon beating the campaign (which won’t take more than five or six hours), you have materials from every level to play around with and use in your own creations. Using the front and back touch screens on the Vita, you can design entire levels using skyscrapers, clouds, blocks and the like. Or you can place notes from different instruments and build an epic song. Hopefully, you’ll combine both to build levels that are on the same level as those found in the campaign, and then share them with the world so that there are always new levels to play, for free.

Yes, the game has an online component that allows you to instantly play any level that another player has uploaded as long you’re on a Wi-Fi connection. No need to download anything. It’s an amazing feature that will potentially expand the game’s replayability to infinite. I’ve already played a handful of great user-generated levels, and the game was just released yesterday. The simple interface gives any player the ability to design and build levels from the ground up, and it’s a great feeling to know that anyone can play and enjoy your work. It’s like a constant stream of free DLC that’s limited only by the imaginations of the game’s players.

One $14.99 purchase of the game gets you the Vita and PS3 versions. I haven’t played it on the PS3, but I can’t imagine the level editor being any more intuitive than the Vita’s.

Buy it, play it, love it, and then create some awesome levels so I can play them.