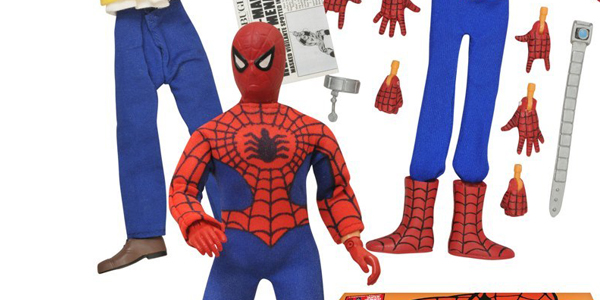 Spider-man will start off a new line of Marvel heroes with cloth costumes from Diamond Select Toys.

When I was a kid I had Mego figures, they were smaller dolls with cloth outfits, and I loved them. They were the only boy’s toys that brought Batman and Spider-man in to my house in 3-D, but soon action figures took their place. I love my action figures but they don’t offer the same kind of versatilely of the Mego figures. You could not make Spider-man wear the Robin costume, or Superman pretending to be Batman. Well Diamond Select Toys is bringing back some that fun with their new Retro line. The first figure is Spider-man, but the line will continue with some other Marvel heroes.

Here is what they had to say about the line:

For years, Diamond Select Toys (DST) has been re-creating the classic 8-inch, cloth-costume action figures of the 1970s, but one line has received more requests than any other: the Marvel Comics characters from Mego’s World’s Greatest Super-Heroes line. Today, DST is happy to announce a line of deluxe gift sets that are inspired by those classic figures, starting with the Amazing Spider-Man!Painstakingly designed by the craftsmen at EMCE Toys, the Amazing Spider- Man will come as he first appeared in 1973, in his original “circle suit” costume. However, the head and costume will be removable, allowing you to use the additional heads, hands, outfits and accessories in the set to turn him into Daily Bugle photographer Peter Parker, or even a more modern comic version of the wall-crawler!“Getting the opportunity to make the Marvel toys inspired by my childhood has long been a goal of mine, and kicking the line off with my favorite Marvel hero, Spider-Man, was a no-brainer,” said DST director Chuck Terceira. “Offering extra parts and new outfits allow us to stay true to what made the toys great in the first place, while simultaneously updating the figures and making each one into a true collector’s item.”The 1970s-style Spider-Man figure will come packaged in a reproduction window box inside a larger collector case, and the additional outfits and parts will come packaged on an adjacent display tray. The case will also contain a miniature booklet outlining the history of the character.Future figures in the line will include Captain America, Iron Man and Wolverine, and each will come with alternate outfits and parts. Each set will be limited to just3,000 pieces, and retail for approximately $80. Pre-orders are open for Spider- Man now, and he will be on store shelves in late 2014.

The price is a little high, but for all the accessories, it will be worth it. So will you jump back in time and try to recapture some of your early toy collecting days with this new line?