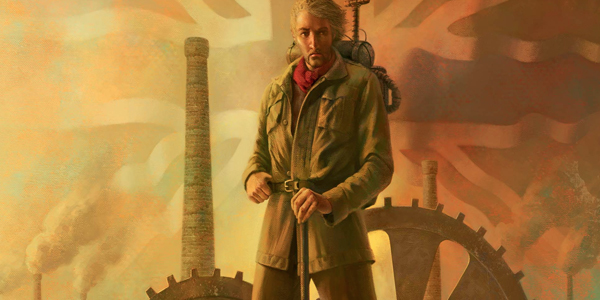 Ystari Games, partnering with Asmodee, debuted Spyrium at GenCon 2013, offering demos and a small number of units for purchase.  The buzz surrounding this title has been based almost entirely on the fact that it was designed by William Attia, the mind that brought us what is still regarded as one of the world’s finest games, Caylus.  Luckily for us, Attia has delivered a new experience that’s completely worthy of the hype and an excellent reason not to judge a book by its cover. 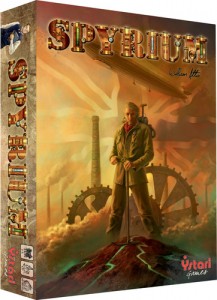 Essentially, Spyrium is a worker placement game with a steampunk aesthetic and minimal components.  Thematically, players must mine for the titular mineral (which holds the potential for limitless energy) and process it using factories, while conversing with helpful characters and patenting new techniques to make them more viable in the market.  The box that houses the game is fairly small and the initial setup looks deceptively simple.  Each player is given a card indicating their color and other pertinent info along with three “worker” meeples, a small amount of currency in coins, and two Spyrium crystal shards.  In the center of the play area, the small game board is placed as well as three stacks of cards, labeled A, B, and C.  The game board is bordered by a score track that should look familiar to any Euro game fans and contains only three other sections.  The first is an area with two boxes signifying whether a player is in Phase I or Phase II of each round.  Under that is a residence track that players may be able to progress on, thus earning additional income at the start of each round.  At the beginning of the game, all players start on the first space, labeled “2”, and will therefore earn at least two more coins each round.  Finally, seven “future event” cards are placed in a face-up stack at the bottom of the board.

The top nine cards from the shuffled “A” deck will then be laid out next to the board in a 3×3 grid which forms the first turn’s marketplace.  The first three rounds will be drawn from this deck, while the “B” deck is used for rounds 4 & 5 and the final marketplace for turn 6 will be constructed from the “C” deck.  After the sixth round is completed, the game ends and points are scored.  The marketplace consists of a random mix of buildings, techniques, and people of interest.  Buildings may be purchased, assuming you have enough money to cover both their cost and the cost of the land to place them on (which increases as you build more structures), and can be used to generate one-time effects each round, while techniques can be patented to grant passive effects for the rest of the game.  Each is placed next to the player’s start card when acquired.  Visiting people will often grant a player with a certain amount of victory points, income, or Spyrium, but often for a cost.

Each round consists of two phases.  In Phase I, a player may take one of their workers and place them in the grid of cards, adjacent to any card they wish.  In Phase II, they may then pull the workers they’ve placed to gain money or attempt to gain/use one of the cards that worker was adjacent to – they may not, however, place any unused workers they still have.  Players may individually decide when they wish to move themselves into Phase II and take turns placing/pulling their pieces until all have passed and the next round begins.  If a worker is pulled to gain money, the active player counts the number of other workers adjacent to that their piece was pulled from (regardless of who owns them) and gains that many coins.  Conversely, if a player is looking to use a card their worker is next to, they must pay one coin for each other worker adjacent to the card in question in addition to that cards base cost.  As you might imagine, strategically placing your workers and determining the most opportune time to shift phases to collect them plays a large role in a player’s success.  If a player is conspicuously trying to gain the benefit of a specific card in the market, other players may congregate there and drive up the potential cost of using that space, effectively shutting others out.  A competing player may also be able to place only one worker and quickly beat others to the second phase, collecting a particular card before other have the chance or simply using their workers to activate their owned buildings that round instead of placing them in the play area.  I’m not sure that I’ve ever really seen this mechanic used in a tabletop game before – it’s incredibly interesting and much deeper than it looks.  In practice, this hectic race to acquire helpful cards often comes down to using precise, calculated tactics.  In fact, players’ limited resources make it a necessity to play Spyrium carefully and with some forethought.  You will typically find yourself extremely short on funds and Spyrium crystals, which adds another layer of intensity to the game – you can look around the table and practically see the desperation painted across all your opponents faces as they stare at their meager income, pondering how they’ll be able to make their next move viable.

Still, it’s a fast-paced, fun experience with great balance and even a bit of randomization thrown in to insert just the right amount of luck into the mix.  Aside from the random order that cards will appear and be laid out during each round (making every game play a little bit differently), some cards will call for tokens to be placed on them face down.  These circular tokens have numbers, from 1-3, printed on them and will be randomly placed on the cards at the beginning of any round in which they appear.  When a player uses that card, they will need to choose one token to flip before proceeding — this could determine the amount of money that needs to be paid to use that card or the number of Spyrium crystals or victory points the card will grant you.  An unlucky draw never seemed like it would be game-breaking but can sometimes throw a wrench into your plans if banking on the best-case scenario.  All players are also given an important choice to make early in the game in deciding which award to accept for reaching eight victory points.  As soon as their marker reaches the “8” mark, that player may choose to add an additional worker to their supply or gain five coins.  Each is an extremely desirable option but players can only choose one, with the other automatically being given later, upon reaching a score of 20.  Both these numbers are highlighted on the scoring track as a reminder.

The components look and feel great and, even though the steampunk angle is a little played out, the theme works well here.  The tiny Spyrium crystals and token discs are still easy to pick up and the card stock is good quality.  The artwork in Spyrium also fits the theme well and looks rather nice, even if it isn’t the flashiest design ever.  The smaller box fits everything well with room to spare and set up time is very fast.  Again, just looking at the minimal, card-based set up and nondescript game board, I didn’t initially give Spyrium the credit it was due.  When it starts hitting retail shelves domestically, be sure to grab a copy, especially if you typically game with a group of three or four others.  While the game supports 2-5 players, the intesity and entertainment value definitely scales up with the number of participants.