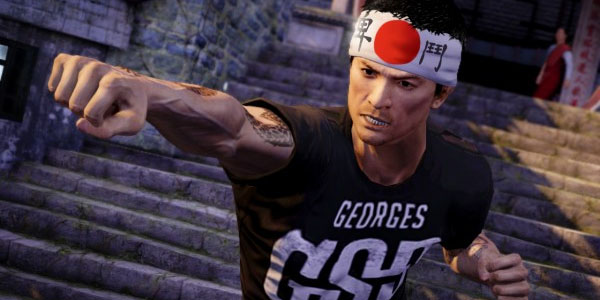 Square Enix has just announced vendor-specific pre-order incentives for two of their most anticipated titles. Sleeping Dogs, the upcoming open-world cop drama, will be seeing a North American release of August 14th for Xbox 360, PS3, and PC with exclusive in-game content for customers who pre-order ahead of launch. Best Buy, GameStop and Amazon will all be offering completely different bonus for ordering through them, so let’s detail all the packs out to minimize confusion.

Best Buy will be offering the “George St. Pierre” (GSP) Pack featuring an exclusive GSP outfit (including shirts, a headband, and shorts) which unlocks a “flying punch” maneuver and increases grappling and throwing damage. 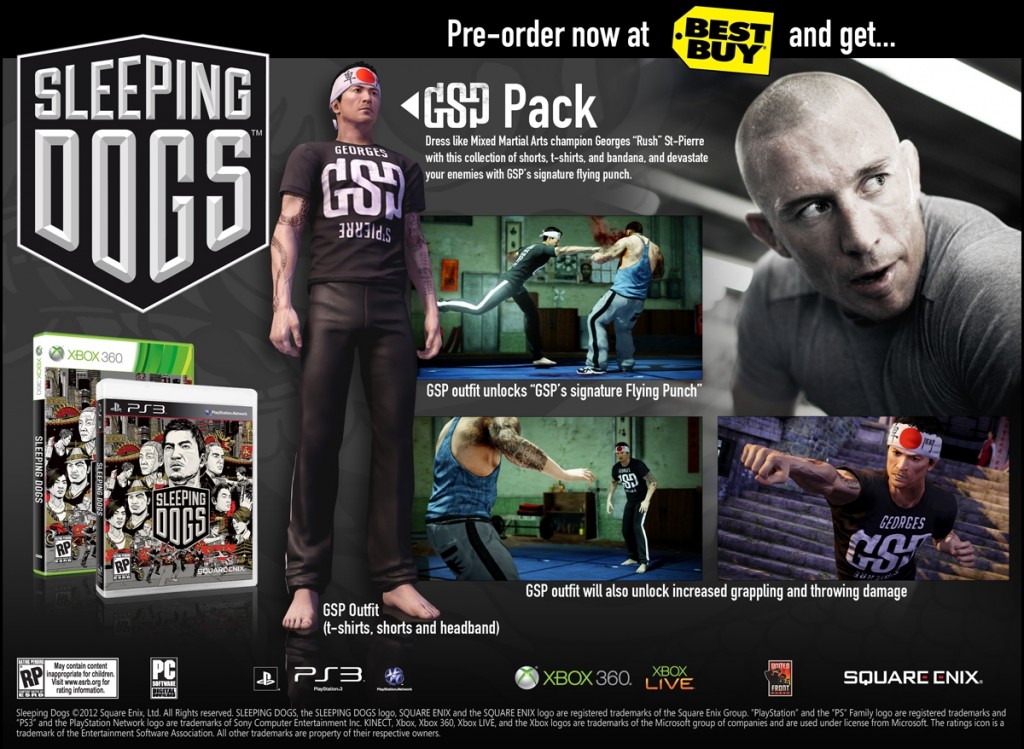 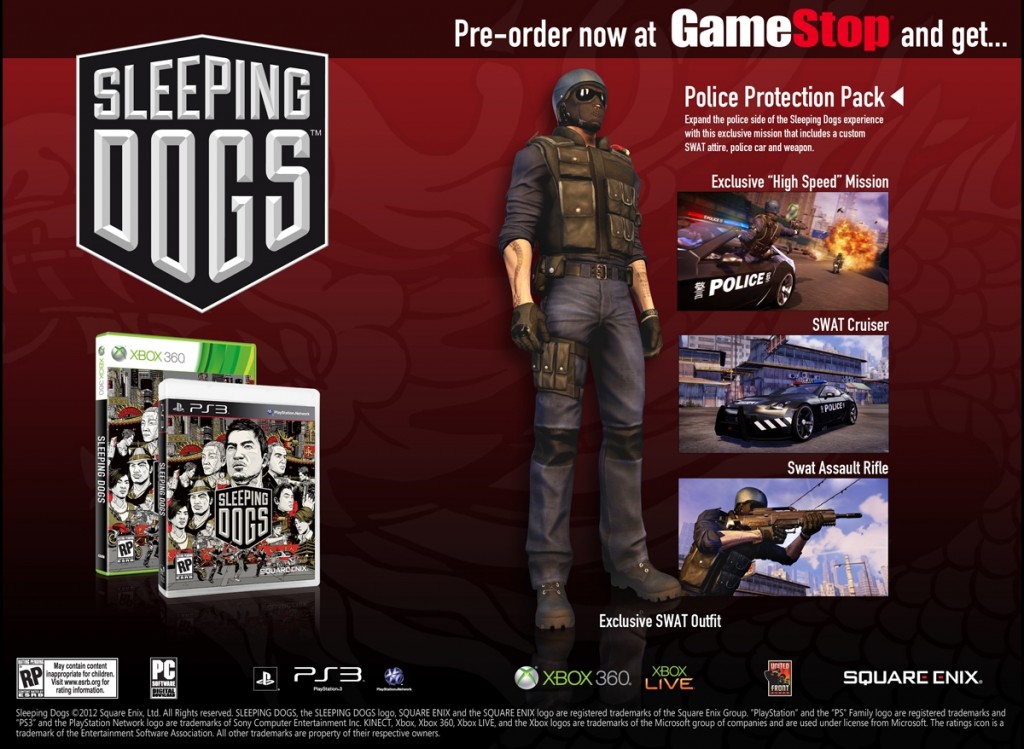 If you order from Amazon, you’ll get the “Martial Arts” Pack and be given access to the Shaolin Showdown mission, a Shaolin Warrior outfit (with increased striking damage), Bonus Triad points, and a Wing Chun decoration for your safehouse (with temporary combat buff). 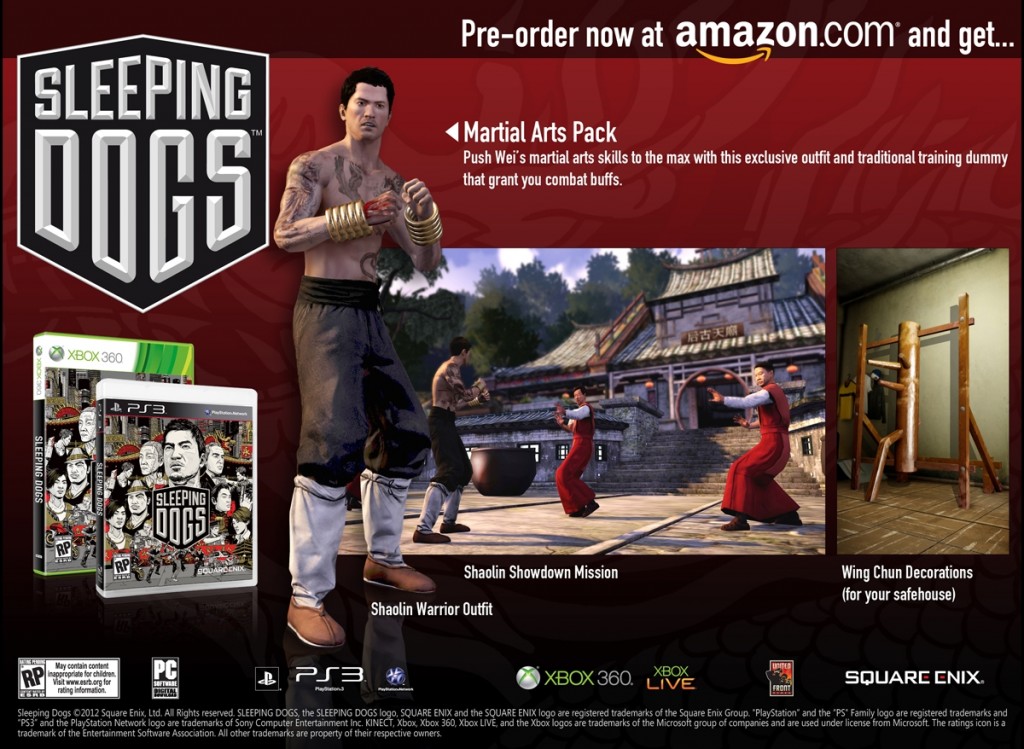 It’s all a matter of preference, of course, but Best Buy seems to have gotten the short end of the stick on that one, offering no additional missions in its pack.  Exclusive content for the digitally downloadable PC version of Sleeping Dogs will be announced soon as well. 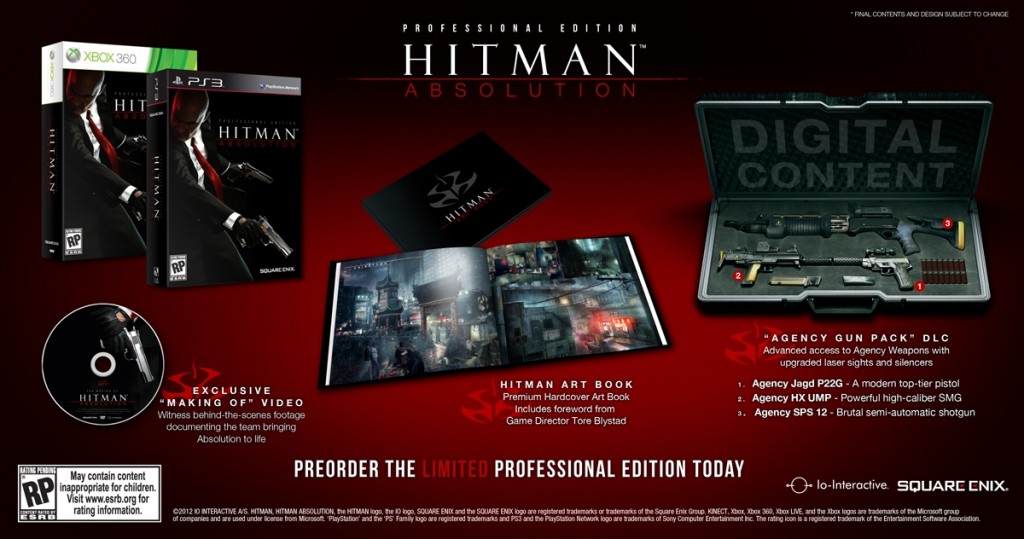 Square Enix also announced that Hitman: Absolution, in addition to getting its own batch of pre-order incentives, is also getting a sweet “Professional Edition.” This edition will include a premium hardcover art book with a foreword from Game Director Tore Blystad and an exclusive behind-the-scenes “making of” video, all packaged in a clamshell box. It also includes DLC for a weapons pack that gives Agent 47 access to some high-powered guns at the beginning of the game. The Jagd P22G pistol looks like it will suit a stealth playthrough perfectly, while the Agency HX UMP submachine gun and SPS 12 semi-auto shotgun favor a less subtle approach. Retailing for $79.99, this limited bundle will likely sell out quick, so get your orders in early.

Similarly to Sleeping Dogs though, you’ll get access to different bonus material depending on where you choose to pre-order from. Here’s a breakdown of participating retailers’ incentives for either the standard or professional edition of Hitman: Absolution, complete with Square Enix’s descriptions of the in-game weapons: 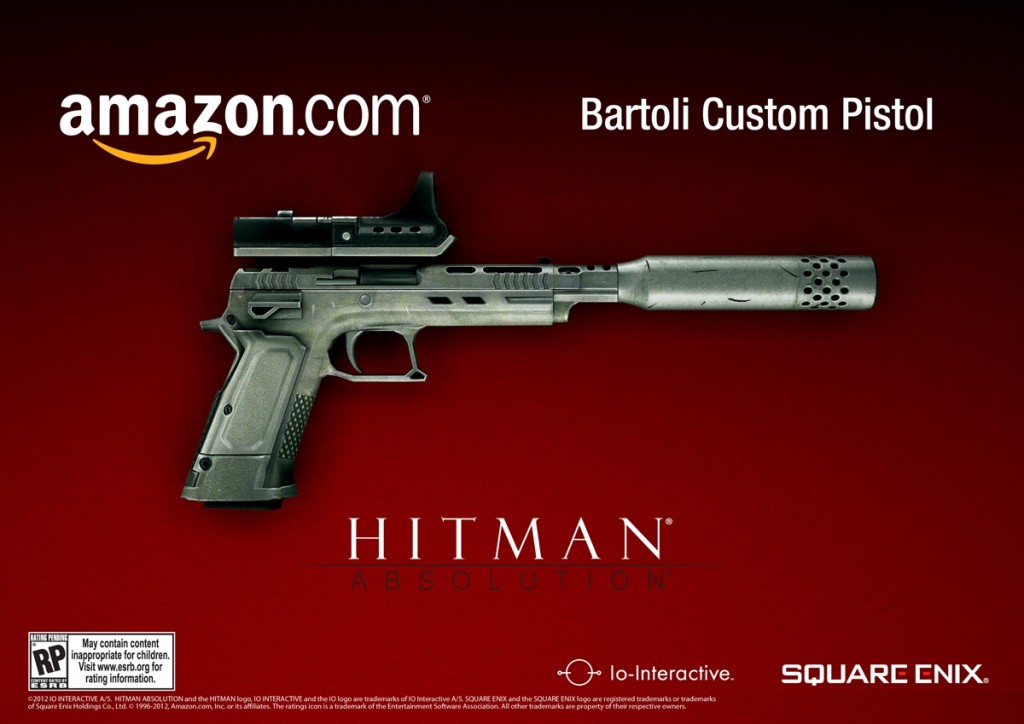 Best Buy will get a Bronson 1928M SMG – “A classic submachine gun with high fire rate and deadly stopping power.” 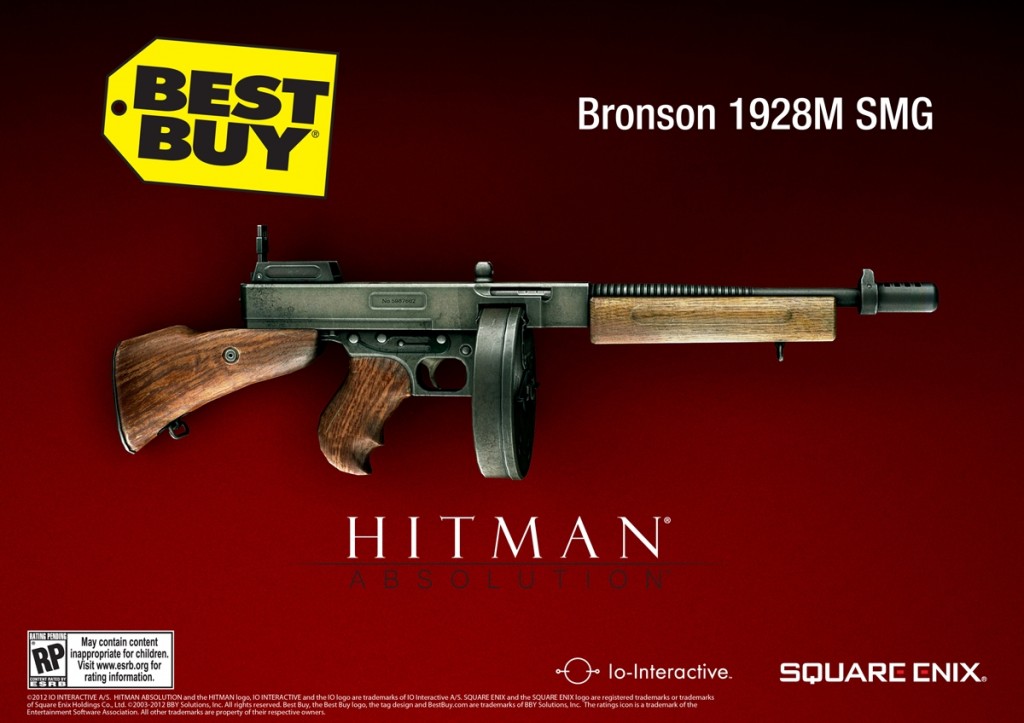 GameStop’s incentive (and my personal favorite of the bunch) is the Agency Kazo TRG Sniper Rifle – A “modern agency rifle with upgradable scope and silencer.” 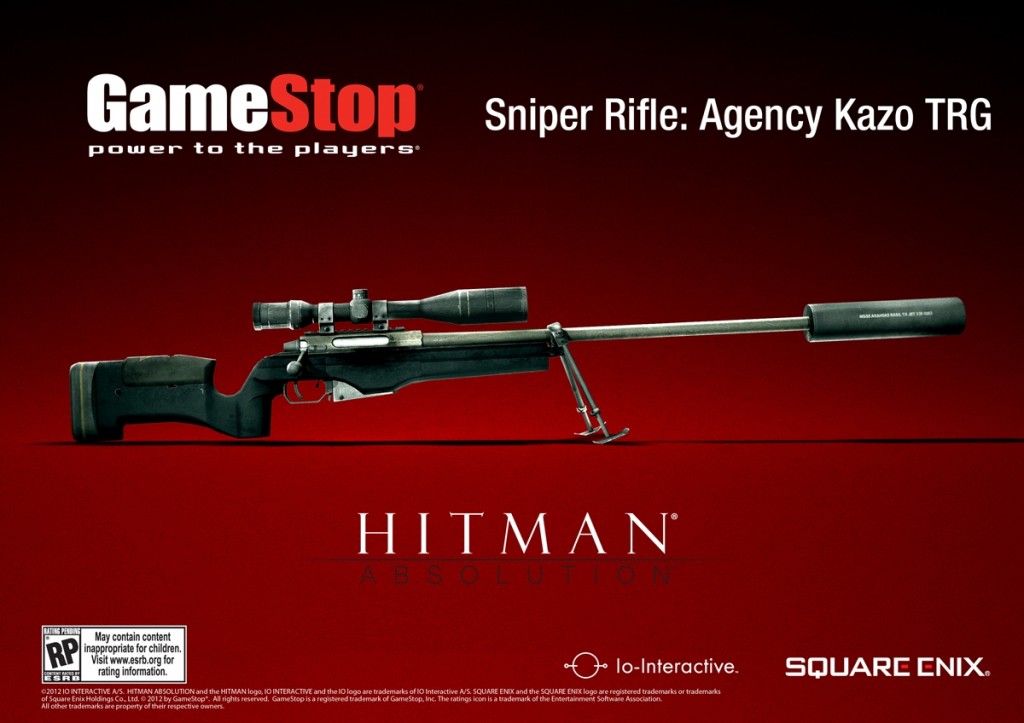 And Walmart (wow, Wal-Mart is doing a pre-order incentive for a game that let’s you murder thugs with a crucifix?) will be giving customers the Krugermeier 2-2 Pistol – “An accurate, reliable stealth weapon with a built-in silencer.” 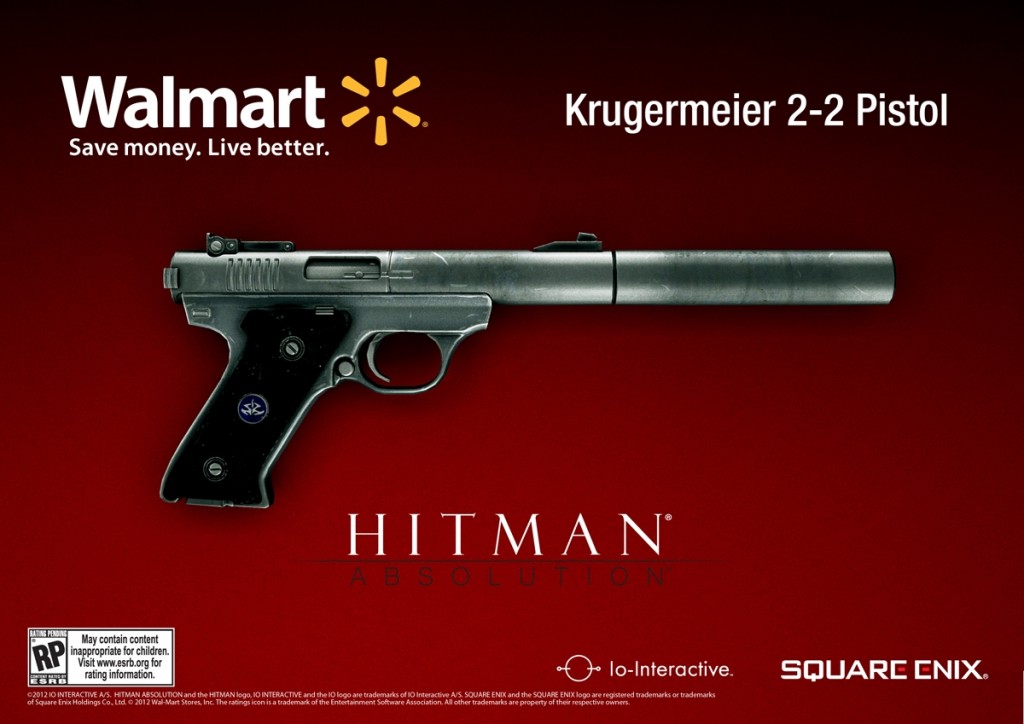 Square Enix also stated that additional pre-order items will be announced in May, although it’s unclear whether these outlets are getting more bonuses or if other retailers may be added. A solid release date is still up in the air for this one, but the developers are confident that it will see release but the end of 2012.