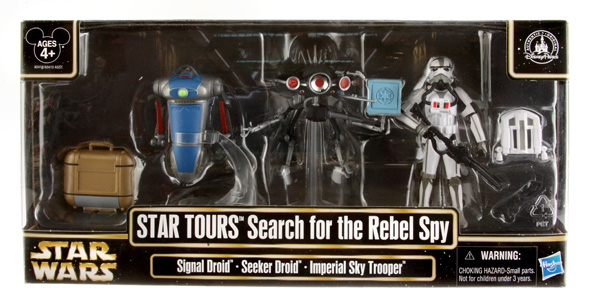 As if there weren’t enough reasons I want to go to Disney World.

Hasbro sent out the notice that 2013 will see the release of two brand new Star Tours toy sets, sold exclusively at the popular rides at Disney World and Disneyland.  The two new sets feature what I can only assume in my haven’t-been-to-Disney-since-the-relaunch ignorance are characters from the new multi-adventure version of the theme park ride.

My non-commital optimism for the future of the Star Wars franchise nonwithstanding, I adored the old Star Tours ride, and the newly revamped version, with up to 40 different adventures you can take in the flight simulator, is going to be my first stop next time I hit Orlando.  Seriously– whoever I go with is gonna have to leave me behind at Disney Studios until I check out all 40 trips.  It probably won’t be pretty.

Anyhoo, here’s the official word from Hasbro about the new box sets, which make their debut this May at Disney’s first annual Star Wars Weekends (the first since the mouse house bought the property from George Lucas, BTW):

The celebration of the amazing new Star Tours Disney theme park ride continues in 2013 with new STAR WARS Star Tours Action Figure Packs from Hasbro.  Building off of the packs released in 2011, these two sets of figures introduce new Droids from the ride experience as well as a few reprised fan favorites.  New figures include a blue Signal Droid, red RX Droid, a G2 Droid rebuilt from scratch for more accurate detail, and the very first appearance of a new Seeker Droid!

Experience the magic of the ride and then relive the action with the STAR WARS Star Tours Action Figure Packs! 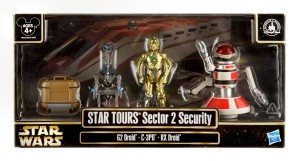 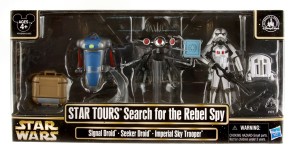