STAR TREK INTO DARKNESS Boldly Goes Where We’ve Already Been 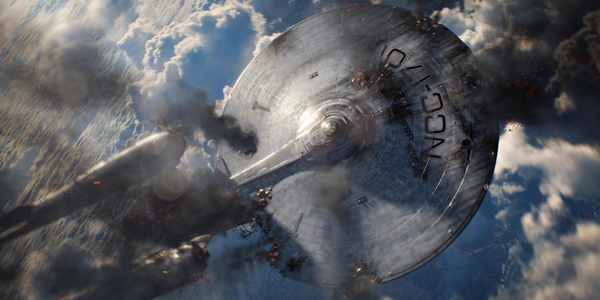 The sequel to Star Trek replaces charm and fun for too many explosions and plot twists which are– as Mr. Spock would say– “highly illogical.”

Warning– There are spoilers ahead for Star Trek Into Darkness– if you have not seen the movie yet, you may want to wait until later to read this review.

If Star Trek Into Darkness, the second installment in the new reboot series by JJ Abrams, had to be described in a single word, the best one I could think of would be “sequel.”  By that, I mean this is a movie which typifies virtually every negative stereotype we so often see in the second chapter of an ongoing film series.  The action is ramped up, the set pieces overly elaborate, the story bloated with more plot twists and cheap fan references to the classic TV series… all at the cost of the charming character moments that made the 2009 film so fun to watch.

Into Darkness begins some time after the events of the last movie, with James Kirk and the crew of the USS Enterprise on a routine surveillance mission which leads to Kirk again breaking the rules, saving Spock’s life, but ultimately costing him command of his ship for breaking protocol.  Just when it seems we’re in for a major shakeup of the iconic Enterprise crew, a pair of terrorist attacks leave Starfleet in shambles and Kirk back in command of the Enterprise, ready to hunt down the man behind the attacks, John Harrison (Benedict Cumberbatch).

This opening act starts off well enough, despite the first mission being a bit too drawn out and exhaustively action-packed.  But it isn’t long before the film begins to fall apart– the Enterprise crew track Harrison to Kronos, the homeworld of the iconic Trek villains the Klingons, before their target surrenders and is taken aboard the ship.

Despite how painfully obvious it has been all along, the movie plays Harrison’s true identity as a “big reveal”– he’s Khan, Kirk’s nemesis from the original series.  As the geneticaly engineered superman fills Kirk in on the history of himself and his fellow 300-year-old super humans (the rest of whom are encased in cryo-sleep tubes built into experimental photon rockets), there is a brief moment where Into Darkness threatens to become an intriguing movie, ready to raise some philosophical questions and introduce some welcome shades of grey to its moral center.

Khan paints Kirk a picture of his semi-tragic past, as he was exploited as a living weapon by Starfleet commander Admiral Marcus… All the “terrorist” claims he really wants is to be reunited with his crew and be left alone to complete their mission.  Khan is set up as a very overt allegory for modern day terrorists, and the concept that he would be depicted as a layered person who committed horrible acts for what he considered a greater good seemed like a very interesting and mature idea to weave into a blockbuster film such as this.  And the conspiracy that comes to light as Marcus himself intercepts the Enterprise with his brand-new Starfleet warship, guns at the ready, only seems to emphasize Khan’s plight as being, maybe, not the villain we expected him to be.

All of this is thrown out the window, in the laziest way possible, as the older Spock (Leonard Nimoy, in an aggressively tacked-on cameo) literally tells Spock and the crew that Khan is their ultimate foe.  As soon as that comes to light, any empathy for Khan is immediately forgotten, and his actions turn from mysterious and sinister to over-the-top evil, with no seeming reason for the change.  Buried under the manufactured mystery, and saddled with some terrible, stagey dialogue, Cumberbatch’s Khan never feels like anything close to the threat he supposedly is, ensuring the stakes of this film never feel high enough.  He’s a blank slate– a generic bad guy, with none of the signature style Ricardo Montalban brought into the role on the classic series and The Wrath of Khan film.  Keeping my Trekkie side out of this as possible (although there are plenty of Trekkie quibbles to be had), the new Khan still failed as a villain, largely because this movie seemed to not understand what made him such a great character to begin with.

Fortunately the Enterprise crew remained much more faithful to their characters.  Like the previous film, Into Darkness‘ best moments come from the interplay between the cast.  There’s a likeability and energy to this crew which makes them incredibly watchable, even in the midst of such a convoluted slog of a story.  Many of the character moments still revolve around Kirk and Spock, but their shared story arc does feel different enough from the last film to feel worthwhile.  Karl Urban once again steals the show as Bones, the doctor caught in the middle of the perpetual friendly sparring of Kirk and Spock.  Bones gets a bit more sidelined in this movie, with many of his character’s “caught in the middle” moments going to Uhura instead, but Zoe Saldana handles her role like a pro and the more action-oriented Uhura is one change that suits this movie well.

Sulu and Chekov don’t get play this time out, but I was most worried that Simon Pegg’s fantastic Scotty would once again get the shortest end of the stick.  Not so– Pegg is fantastic, stealing every scene he’s in, and while his comedic sidekick schtick was on point, he also gets some action sequences of his own which are amazing to see.  Chris Pine’s Kirk is fine, although when considering his role feels largely like a rehash of the “Kirk needs to learn responsibility” arc of the previous movie.  Zachary Quinto’s Spock remains perfect, the best-realized Vulcan character since Nimoy’s original, and he shines especially in his many interactions with Kirk and Uhura.  While Quinto is competent in his action moments as well, the big set pieces don’t feel like the right place for Spock, leaving his shoe-horning into many of the film’s biggest action bits feeling tacked on.

As far as the action scenes themselves, they are all fairly well directed and realized.  There’s a clear sense of what is going on in each, and from the rumble with a Klingon patrol on Kronos, to a truly thrilling deep-space luge jump, every moment feels unique.  However there are a LOT of them, and parts of the overly complicated plot exist solely to connect one action sequence to the next.  The end result is a very bloated movie, one so bombastic that I felt desensitized and completely pulled out of the story by the final foot chase through the streets of San Francisco.  The volume and intensity of stuff that happens makes this movie feel considerably longer than its two hour run time, and the half-boiled plot twists don’t do it any favors.  The first Trek reboot remains remarkably fun to watch, but upon any consideration it’s filled to the brim with plot holes and flaws that become obvious the moment you think about them.  Into Darkness is loaded with the same kind of plot holes and nonsensical story choices as the former, but without the sense of wonder and charm that forgave those faults before.

It all comes to a head in the worst moment of Into Darkness, as Kirk sacrifices himself to save his ship and crew in a role reversal of Spock’s death in Wrath of Khan.  The scene was clearly intended as a nod to its predecessor, but lacks any of the weight and drama that made the original a classic.  Pine and Quinto are fine, but fans had followed Shatner and Nimoy for over a decade before the Vulcan said his goodbye and Kirk screamed the name of his enemy.  Here, it all feels empty, and the painfully obvious way that the crew circumvents Kirk’s death leaves the entire scene pointless.

Into Darkness is far from the worst Trek film of all time, but it’s a definite step down from the surprisingly fun 2009 reboot.  The cast that’s been assembled for the current Trek still shines bright, despite this movie’s best efforts to bury them beneath CGI explosions, predictable plot twists and nonsensical conspiracy theories.  The film ends with the beginning of the five-year mission in which the original TV series took place… while I would absolutely love to see more adventures of the current Enterprise crew on the big screen, they desperately need to dial back some of the bombastic action and let us just enjoy these great characters a little more personally.