STAR TREK INTO DARKNESS Is Not So Dark 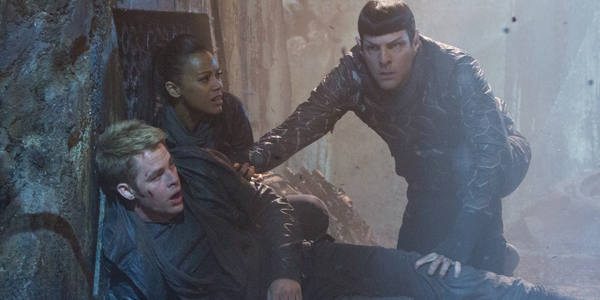 Star Trek Into Darkness leads our famous crew into the start of their first 5 year mission in the stars, but falls back to earth with a thud.

Abrams did a wonderful job reinventing the Star Trek franchise for a whole new audience, but in his second outing he missed the mark making a fun popcorn movie, but not a great Star Trek movie. For a film shrouded in so much mystery and dark themed trailers it was surprisingly not dark. 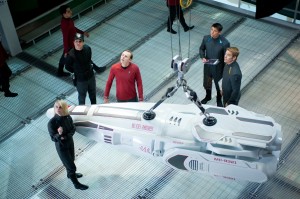 The actors in the film reprise their roles as the crew of the Enterprise, and once again prove that you can recast iconic roles without disrespecting the originals.The characters show some growth throughout the film, Kirk learns humility, Spock gets some new emotions, and Sulu gets a taste for being a leader. The cast works well together delivering quick well written lines naturally, and the interplay between the characters is entertaining to watch. Karl Urban as McCoy once again delivers the famous lines of things he is not, and is able to be a moral compass for Pine’s Kirk. Uhura, Zoe Saldana, is able to keep the peace between the captain and his first officer but falls into the background of the film, playing the role as Quinto’s girlfriend rather than the strong crew member from the first film. The real scene stealer in the film are Simon Pegg as Scotty, making every minute of screen time with the engineer, worth the price of a ticket.

Benedict Cumberbatch joins the film as the villain this time as “Harrison.” Each line is delivered with a cold and emotionless ruthlessness that makes him feel like a classic heartless villain. The reveal of the character’s true identity was rather flat, leaving me to wonder if Kirk is still from Iowa, and Sulu is Asian and can fence why choose Cumberbatch to play this villain? His origin predates the Romulan encounter with George Kirk so his origin should not have changed to radically. 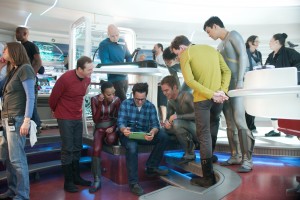 Where the film falls apart is its inability to separate itself from the past. This being the second film in the new franchise it has a lot in common with the original second sequel. Like Superman Returns there were too many similarities between the two to make this feel as fresh as the first film. I had high hopes that many of the actions in the film would not be so predictable, but when all was said and done, I was left feeling like that’s all?

There were some nice nods to past star trek outings like Tribbles, Mudd, and what looked like Cochren first warp ship in the Admiral’s office. Leonard Nimoy also makes an appearance but it felt forced not really adding anything to the plot. Overall the movie ends with a nice little bow of a happy ending, but with a title like “Into Darkness” I would have been fine with a much darker ending.