Star Trek: Into Darkness Gets A Trailer, Names Its Villain 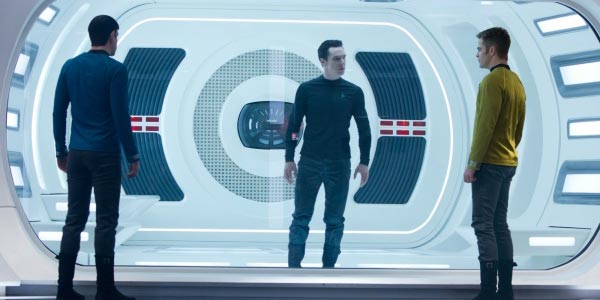 You know a JJ Abrams movie is coming when the misinformation and confusion gets this thick!

The back 90+ minutes of Star Trek: Into Darkness won’t hit theaters for another half a year, and it looks like director JJ Abrams will be up to his old tricks in the meantime, spreading just as much disinfo as hype for the new movie.  Late last week saw the release of the first trailer (see below), as well as a new production photo (see above) released by Paramount, which identifies the new villain, played by Benedict Cumberbatch, as John Harrison.

Which begs the question– who is John Harrison?  Until now, we’ve been told the new bad guy would be from classic Trek canon, and months of rumors have all pointed to Khan.  The most concrete evidence was this Japanese cut of the new trailer, including a few moments adapted straight out of Wrath of Khan, most notably the hands of Kirk and Spock touching against the glass:

So what’s going on?  The only Harrison from canon I can think of was a background serviceman aboard the Enterprise, so I guess it’s possible this blank slate crewman is getting a major facelift for the new movie… but I tend to buy into the theory Devin Faraci posed at Badass Digest— Harrison is likely an alias being used by Cumberbatch’s villain until he reveals who he really is… probably Khan.

It’s also possible the new villain is something else entirely– yes, the Khan stuff could be part of Abrams’ puzzle box mystery, but I think the idea that the villain is from canon is just as likely to be the lie.

While there’s still as many questions as answers as to who the Enterprise crew will be facing, the trailer does shed some light on a few things:

1.) part of the new movie definitely takes place on Earth,

and 2.) whoever put this trailer together reeeaalllly likes Chris Nolan.

Between the gray, gravelly pallet of this footage, the booming Inception noises going on, and the recent Dark Knight-esque poster, it seems like the Trek sequel is riding Nolan’s coattails pretty hard.  That’s not necessarily a bad thing– Skyfall had a lot in common with Nolan’s Bat-films and benefited greatly from it.  But unlike Bond, what made Abrams’ Star Trek reboot so entertaining was how un-Nolan-esque it was… studios and directors have been aping the “grim ‘n gritty,” grounded fantasy aesthetic Nolan helped popularize for years now, but in the midst of that, the bright colors and positive, un-cynical charm of Star Trek really stood out.  I hope, like the latest Bond, they can balance swiping a few stylistic or structural tics from Nolan’s toolbelt without losing sight of what made their first movie such a success to begin with.

Here’s the trailer… what do you think? Are you into a darker, more grounded Star Trek?