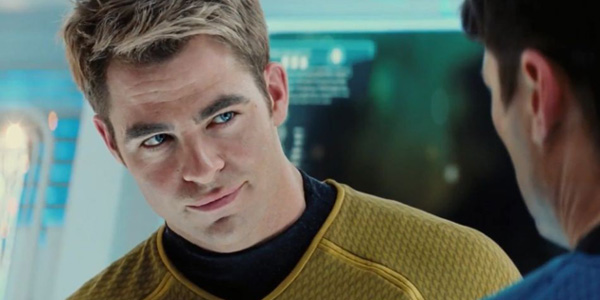 The new Star Trek trailer sidesteps the Dark Knight trappings for some good, old Trek reboot-style fun, and a new focus on Kirk being Kirk.

The marketing for Star Trek Into Darkness has been borrowing pretty heavily from the grim, dark ‘n dour, Chris Nolan/ Dark Knight playbook, but thankfully the latest short trailer goes much lighter, and reminds me of everything I dug about the first reboot.  When the new Trek hit theaters, its clunky script and cheesiness was easy to ignore, thanks to the endlessly entertaining chemistry of the cast and upbeat brightness of the movie’s visuals and themes.  It was a super fun ride and a breath of fresh air from the grounded gravitas of most blockbusters, which this new sequel has seemed mired in.  Into Darkness didn’t look bad, but it felt like ground we already covered (probably much better) in Nolan’s Bat-films, and re-treaded in all the Nolan rip-offs since.

The new trailer looks a lot more fun, with plenty of antics involving a Kirk/ Spock/ Bones away team, and some welcome moments of Kirk nailing the three “c’s”– he’s cocky, cavalier and charming all over the place.  I think it’s obvious the new Trek sequel will be kind of goofy and dumb, but I’m hoping it will be entertaining and silly instead of dark and silly.

A new theatrical trailer should be hitting shortly, the final one before the movie releases this May.