Star Wars “Best Of” Vintage Wave Is Worth Your Attention 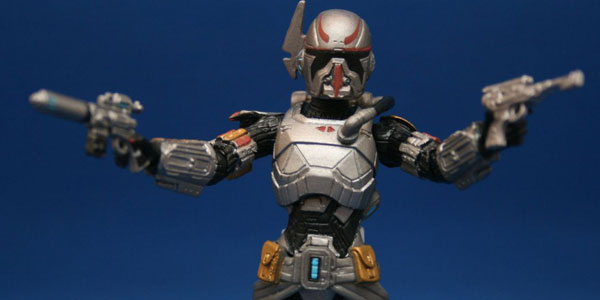 Next month, Hasbro will be reissuing a bunch of hard to find figures from the Star Wars Vintage line, and these guys are cool enough that you should go for it.

The Star Wars Vintage Collection is being put on hiatus starting in 2013, but Hasbro is taking the early Spring to help fans, many of whom have missed out on one or more waves of Vintage figures this year, as the line has been plagued with distribution nightmares virtually all year long.  Hasbro is giving us all a mulligan on the hardest to find Star Wars figures with this reissue case, and many of these new additions are so excellent, they belong in any Star Wars collection. 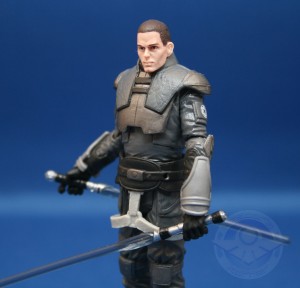 Although the “best of” case is still over a month away from release, the original cases have been trickling out to Toys R Us stores and online at Hasbro Toy Shop this Winter.  I managed to chase quite a number of these new figures down over the last month, so I wanted to give you a preview of who to buy and why when the final wave is re-released in early 2013.

This wave is heavy on Jedi, which is a smart choice– I’ve known quite a few other recovering Star Wars addicts who, like me, used the “I’ll only buy Jedi” as their escape.  But the Jedi featured in this assortment are cool, often new and come from a variety of sources.  The new takes on Aayla Secura and Barriss Offee are excellent upgrades of the Jedi’s Episode II looks.  Secura is loaded with articulation, even ball hips, and includes a great cloth Jedi robe, while Offee sports a very nice plastic hood and cloak, a cloth skirt and a fantastic paint job detailing the freckle pattern above her nose.

Moving into Expanded Universe territory, the “best of” wave will also give collectors another shot at the very admirable Clone Wars Anakin Skywalker, a realistic take on his animated series appearance.  This is one of my favorite Anakin figures, packed with articulation and detail on his pre-Vader armor.  His son Luke gets an off-screen figure in this assortment as well, the Return of the Jedi-era “Lightsaber construction” Luke.  This look for the Jedi is basically his Jabba’s Palace garb, an all-black Jedia outfit with a cloth robe, but not only is this one of the most well-articulated Luke’s ever (featuring one of the most faithful Mark Hamill portraits, too), but he features the first, ever disassembled Lightsaber accessory, which is kind of cool. 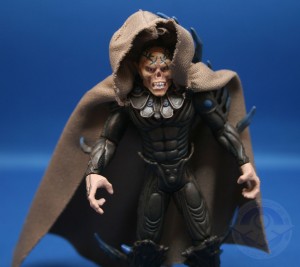 Moving further into the EU, this wave also re-delivers three of the most sought-after figures of 2012– Starkiller from The Force Unleashed, Shae Vizla from Knights of the Old Republic and Nom Anor from New Jedi Order.  The Yuuzhan Vong aren’t for everybody, but Anor is a decent figure, although a little small compared to other Vintage characters.  His cloth cloak is very nice, though, and the muscles and spikes of his armor give him a very unique look amongst the Star Wars collection.  Starkiller gets a nice upgrade in an Imperial jumpsuit outfit, with removable chest and forearm armor, and two alternates for a belt… plus Marek’s two Lightsabers.  Mandalorian bounty hunter Shae Vizla made her debut aiding Darth Malgus in KOTOR, and her figure certainly does the villain justice– the all-new sculpt features Vizla’s robotic armor perfectly, and she gets twin guns and fireballs that snap onto her wrist mounted flame throwers,  Topping things off, she gets an alternate helmeted head, to switch with her fantastic-looking unmasked head. 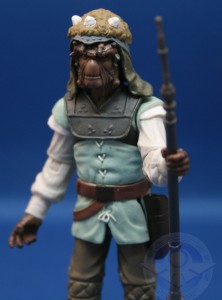 Original Trilogy fans will be happy that this assortment also gives them another chance at two major characters that never wound up in the actual, old school Vintage line– Grand Moff Tarkin and Wedge Antilles.  Vader’s boss from Episode IV finally gets the figure he deserves, with an all-new sculpt of Tarkin’s officer uniform and a wonderful portrait of actor Peter Cushing. I didn’t know how the cloth lower tunic would work out, but I really like it– the color matches the plastic perfectly, while not inhibiting Tarkin’s posability in the slightest.  The villain includes a blaster, and a reissue of the SDCC exclusive Mouse Droid.  Wedge, meanwhile, is finally released in his orange X-Wing jumpsuit, complete with removable helmet and his blaster.  Antilles is one of the more notable Rebel pilots, both in and out of canon, and it’s great for him to finally get the figure he deserves.

Rounding out the mix, we also see some of Jabba’s thugs, with reissues of the Gamorrean Guard, and skiff guards Kithaba and Nikto.  All are awesome, and the choice to include the Gamorrean is brilliant, as he serves as a great looking army builder.  The two Skiff Guards are both the finest toy renditions of these space pirate creatures we’ve ever seen, with holsters for their blasters and removable headgear.

I think with an assortment this varied, loaded with this many sought after figures, the “best of” Vintage assortment earns its name.  I’m sad to see Star Wars’ Vintage Collection take a hiatus, as it’s delivered some of the finest Star Wars toys ever released over the past two years, but it’s great to go out on top.  And listening to fans, and offering one last mix to help them finish their collections is a great move on Hasbro’s part.  Look for the Vintage Collection “Best Of” wave in stores this February. 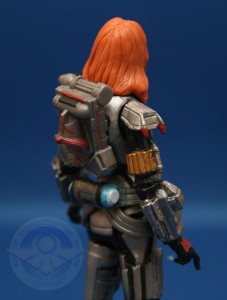 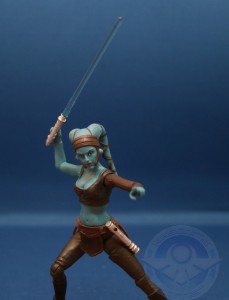 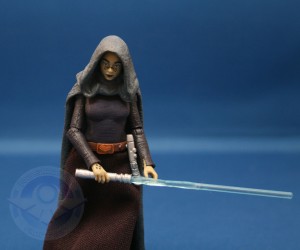 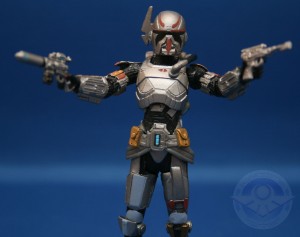 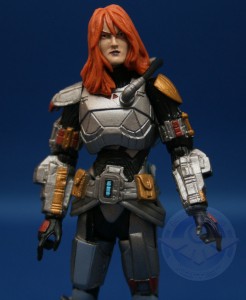 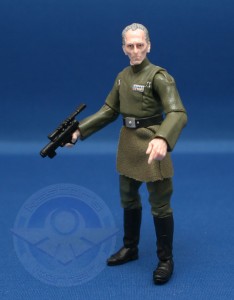 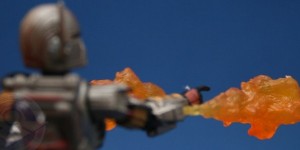 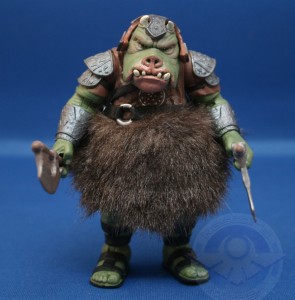 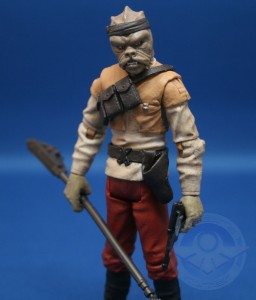 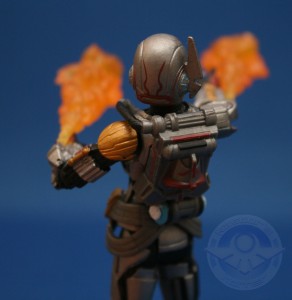 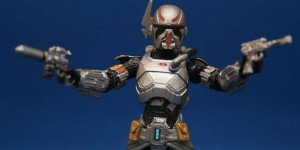