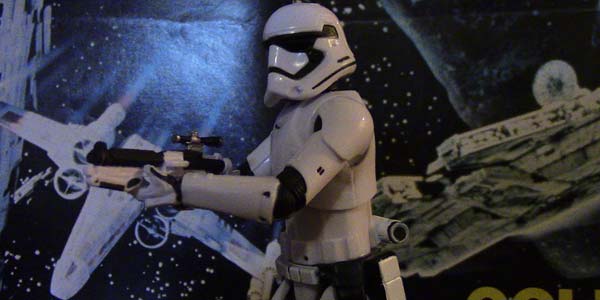 The first toy released for The Force Awakens was the First Order Stormtrooper back at San Diego Comic-Con. Being an exclusive to that event and then briefly released on Hasbro’s website, many people weren’t able to get their hands on him. Luckily, Hasbro decided to re-release the new Stormtrooper in the standard Black Series 6-inch line.

One of the most sought after figures on Force Friday, and rightfully so, the First Order Stormtrooper is a mix of both good and bad qualities. However, it must be said in this case the good far outweighs the bad and makes this guy a must have for any collector. The detail on the shiny new is superb. Even down to the tiniest of details, like the small ridges on the helmet to the indentations on the bicep. Perhaps my favorite part on this guy is the sheen his armor gives off. It looks like it has been freshly waxed, a feature that has been sorely lacking in all 6-inch troopers. Hopefully this is a step forward, and all troops will shine like the morning sun.

Unfortunately, the articulation on this guy is lacking in a key area. The elbows are on a ball hinged instead of a double hinge. Normally this wouldn’t matter, but so far in the 6-inch line all troops have had this feature as it enables them to properly hold their guns. That being said, he can grip his weapon with both hands, but aiming his trusty E-11 can prove to be quite the challenge. Aside from the elbows, the First Order Stormtrooper boasts a ball hinged neck, ball hinged shoulders, ball jointed torso, ball and joined hips, a swivel at the upper thigh, double hinged knees, and rocker hinged ankles.

Accessory wise, he has the newly painted E-11 blaster, and a small pistol, both of which slot nicely into the holster carved in his armor. I would’ve like more here, but there really isn’t too much that could’ve been added. The last drawback is a major one that has affected the entire Black Series line and it is once again the paint operations. Some black paint has gotten away from the goggles and it does make him look a bit off. Other than that though he is a great army builder and a must have for the collection, the only problem now is to find one. 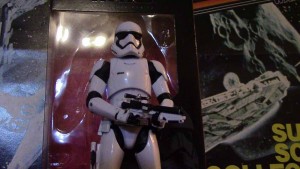 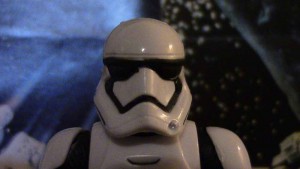 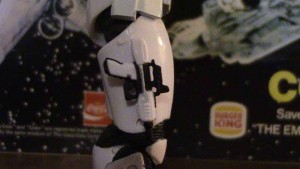 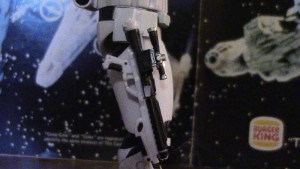 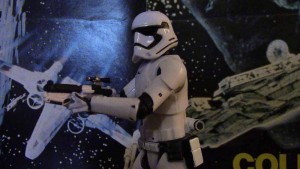 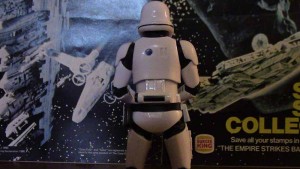 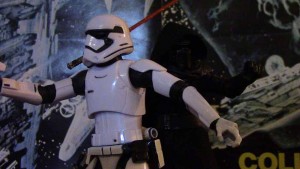 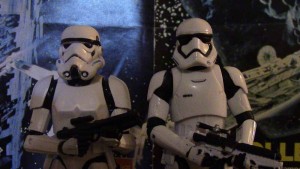 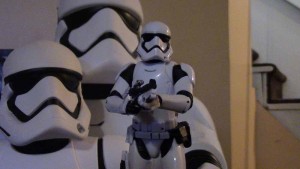