Star Wars Black Series Bossk: A Bounty Worth the Hunt 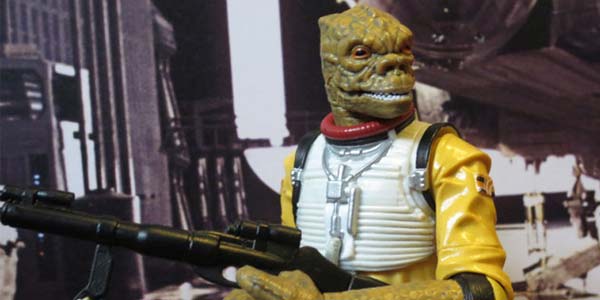 I can’t think of many movie moments more evocative than the scene in Empire Strikes Back where Darth Vader assembles a group of Bounty Hunters to chase down the Rebel scum that has eluded him.  This collective of weird looking badass alien creatures, and Vader’s iconic order of “no disintegrations” lit my young imagination on fire the first time I watched it, and Boba Fett and his ilk have lived on since then, chasing down countless bounties throughout the galaxy.

One of my other favorite bounty hunters has always been Bossk, the big, mean looking reptilian Trandoshan.  And it’s this guy who is the latest bounty hunter to get the toy treatment in Hasbro’s Star Wars: The Black Series.  Bossk is a great addition to the line, and his all new sculpt is very well done.  From the naturalistic folds and bunches in his flight suit, to the cool little technological trappings adorning his costume, this sculpt captures the alien’s on screen appearance brilliantly.

Bossk is a humanoid creature, but his design departs from that in some subtle ways, and Hasbro’s sculpt encapsulates these details very effectively.  Bossk’s weird, long arms, three-fingered hands, and stocky legs leave him with a familiar yet still alien look, with lots of allusions to the dinosaurs that clearly inspired his character design.  The scales and ridges and leathery texture of Bossk’s skin is intricately sculpted, leaving us with one of the most textural, visually dynamic figures in the Black Series.

The headsculpt on this figure is perfect, featuring a slightly more expressive face than the neutral stare Bossk delivers in Empire, but it totally works for the figure.  He has a decent range of motion in his neck (restricted just slightly by the high collar of his uniform), and even features a hinged lower jaw, which works great while not interrupting the excellent sculpt. 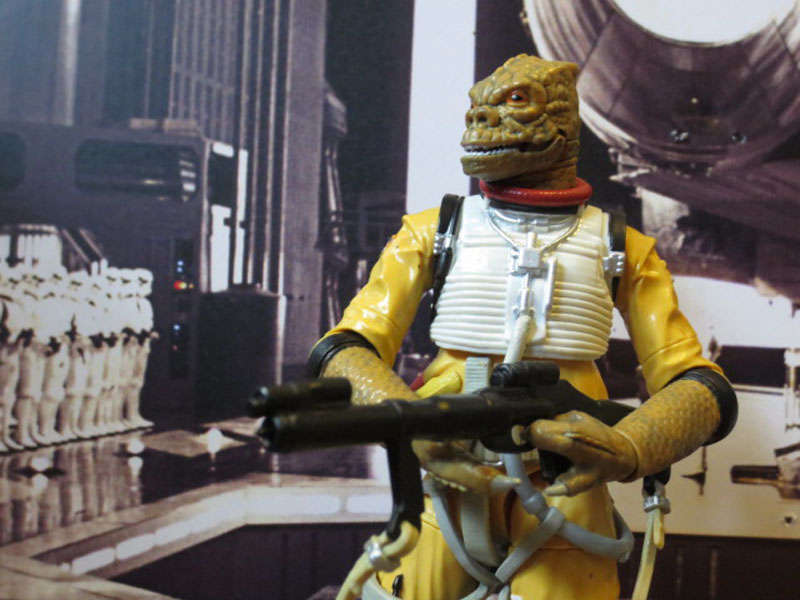 In terms of paint, Bossk is pretty good, with clean and concise line work and edging on his costume details.  There’s a semi-gloss finish on his flight suit that makes it look sort of plasticky, but with so many matte finishes in the Black Series, I can’t imagine this wasn’t a conscious decision.  I’m much more impressed by the paint work on Bossk’s skin, which features an understated dark wash that enhances the reptilian detail in his sculpt.  And the figure’s weird orange and black eyes stand out very well against his scaly brown skin.

Bossk features the standard articulation pattern for most Black Series figures, with a fairly good range of mobility.  His legs are particularly well engineered– the hanging straps on his flight suit are made of a soft enough rubber so as not to restrict his hip movement, which is a huge win.  The only real limit is Bossk’s elbows, which can’t reach a 90 degree bend due to the cuffing of his sleeves.  He is still poseable enough to hold his blaster gun with one or both hands, so this limitation is certainly not a deal breaker.

A problem that has surfaced a few times in The Black Series is the weird scale problems between figures, but Bossk is sized just about right compared to most of the figures in the collection.  He’s taller than Boba Fett and Han Solo, and stands basically eye-to-eye with Darth Vader, making him one of the taller figures in the series.  He’s still dwarfed by Chewbacca (who remains a few centimeters taller than he really should be), but overall, Bossk serves as another prime benchmark of scale in Hasbro’s growing toy universe.

This bounty hunter is available now in the latest wave of Black Series figures to hit, alongside Han Solo in his Stormtrooper disguise.  Visit our friends at Mike’s Comics N Stuff to add these guys to your collection now! 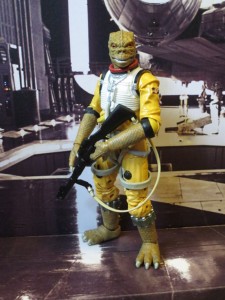 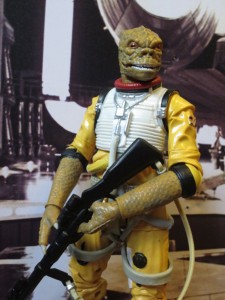 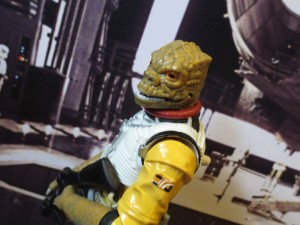 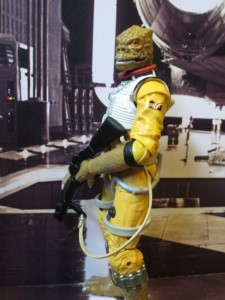 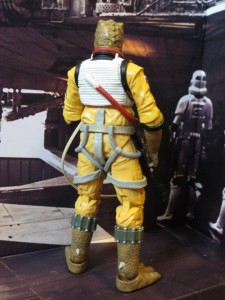 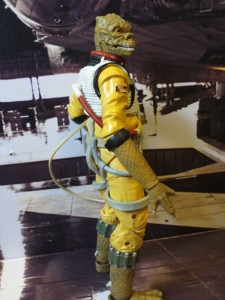 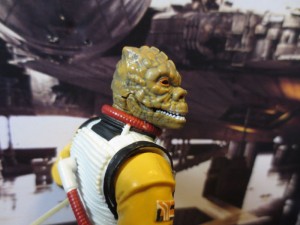 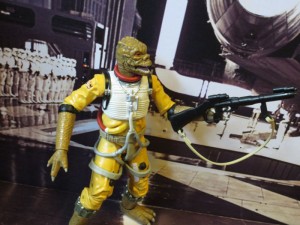 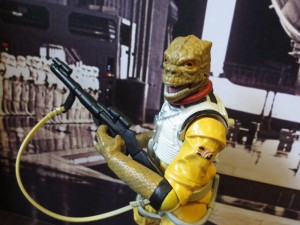 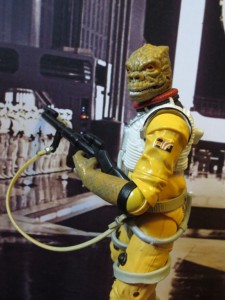 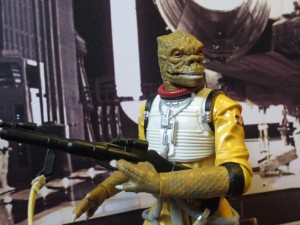 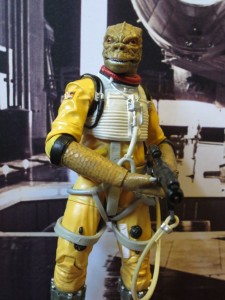 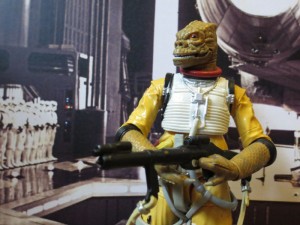 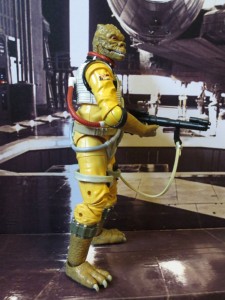 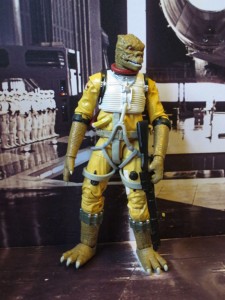 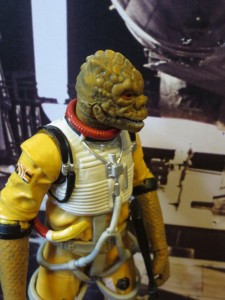 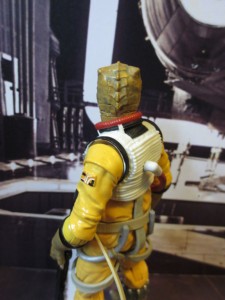 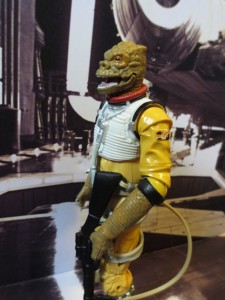 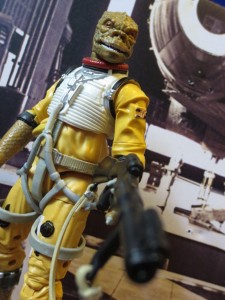 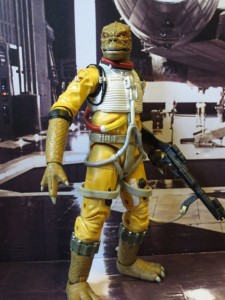 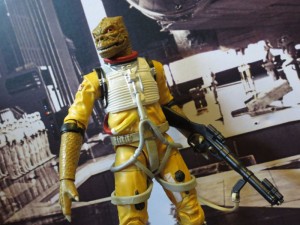