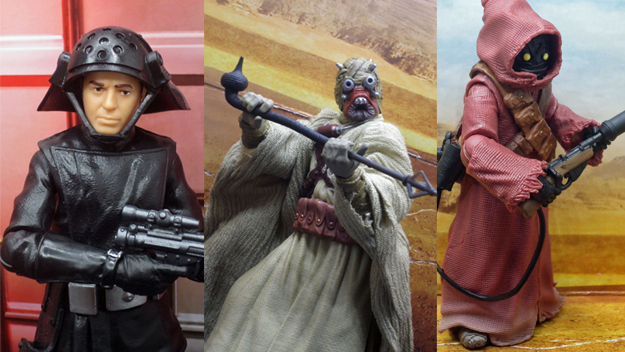 With the second wave of 40th Anniversary Collection figures, Hasbro has rounded out the lineup of the first twelve Kenner vintage toys, for better or worse (mostly for better).

While I had my issues with the execution, I love the concept of Hasbro’s 40th Anniversary Collection this spring.  The mini-line allowed the toymakers to celebrate the birthday of Star Wars with a line that paid tribute to Kenner’s very first 1977 action figure releases, while delivering a healthy mix of hard to find reissues from The Black Series’ past, a few welcome upgrades, and several all new additions to the 6″ series, most notably Wave Two’s Jawa and “Death Squad Commander.”

These two figures complete the lineup of Kenner’s “original 12” figures, and each makes for a fine figure in their own right.  This latest assortment also features a third pseudo-new figure with the Tusken Raider (or Sand People, as he’s referred to in the 40th packaging)… a figure intended for release earlier in 2017, but oddly delayed until after his anniversary counterpart started hitting retail.  A welcome troop builder, the OT era Stormtrooper, along with Chewbacca and C3PO finish off this latest wave of 40th figures… but those three are identical to their original releases, so I opted to pick up only the three newcomers to the line.

By no fault of the others, the Jawa is easily the winner of this set. Despite his small stature, this guy is packed with lots of useful articulation and a fantastically detailed sculpt. From the rough surface on his robes and the pouches on his bandoliers, to the all-black wrappings covering the Jawa’s face, every inch of this creature is filled with texture and detail.  I think Hasbro made a smart choice by giving him a fully sculpted rubber robe, with no soft goods, as it allows him to feel more consistent and complete than mixed media figures Hasbro has released, like The Emperor or Yoda. 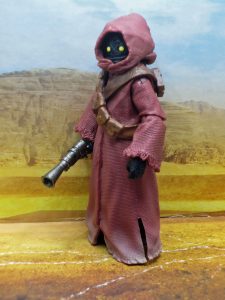 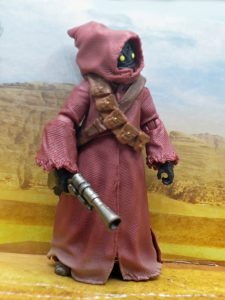 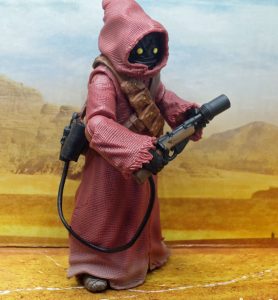 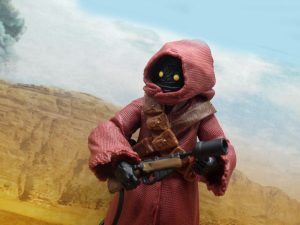 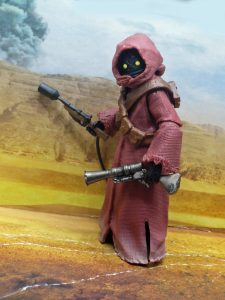 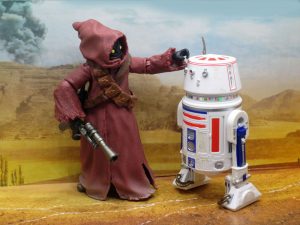 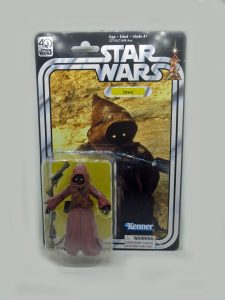 The Jawa includes two different guns, one of which connects via a wire to his belt, and a holster to store one of the weapons.  I’ve heard some reports of the figure’s wrists being prone to breakage (likely due to their small size), but each joint on my figure feels nice and sturdy.  At some point down the line, this figure will be re-released in The Black Series proper… I’m hoping Hasbro opts to mark that reissue with some kind of unique feature, whether it’s a unique paint job or– to nod to the vintage toys– a cloth outer robe… in any event, due to the slight differences between them on screen, this guy lends himself perfectly to a slight variation which will make owning both versions appealing to virtually every Star Wars collector out there.

Our other all new figure is the “Death Squad Commander,” better know nowadays as the Death Star Commander.  This Imperial officer looks great, from his pressed and linear black uniform, to his iconic, crescent shaped helmet, to the sideburns that adorn his face beneath said removable helmet.  After Orson Krennic, this figure marks our second Imperial officer in The Black Series, and the new tooling he incorporates is not only great in its own right, but has me excited for its reuse on future Imperials such as Grand Admiral Thrawn, Grand Moff Tarkin, and whatever else Hasbro has in store for us. 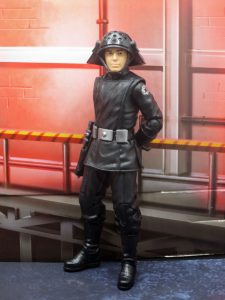 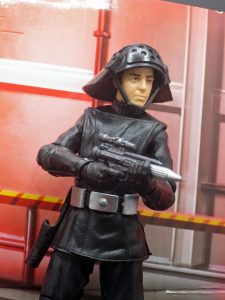 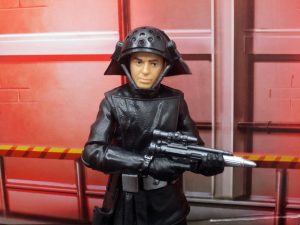 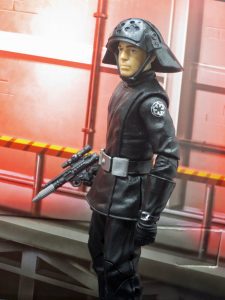 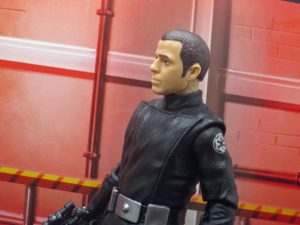 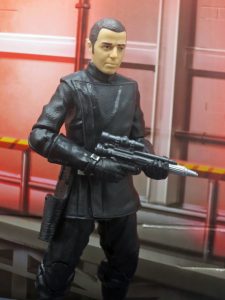 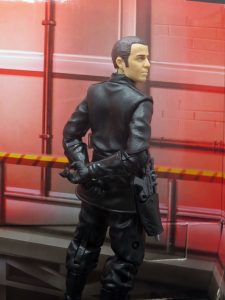 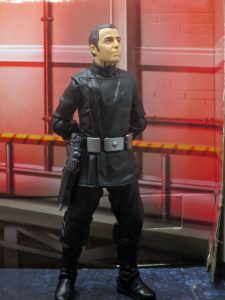 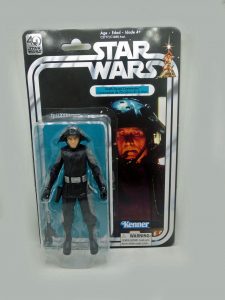 Rounding out the new assortment is the Tusken Raider, who is all sorts of excellent.  While I typically don’t care for outer soft goods on plastic action figures, the coarse robes of this guy totally work, offering him a full range of motion while maintaining an aesthetic consistency.  Beneath this outer shawl, the Raider sports an intricate, entirely new sculpt, filled with details and some solid paint apps which weather him quite realistically.

Another thing I love about this “Sand Person” is his accessories.  In addition to the long rifle, this figure also includes a Gaffi Stick, with three alternate extensions which can plug into the end.  This is such a great stylistic choice by Hasbro, as it opens the figure up to a variety of display options, while maintaining the general uniformity among the (male) Raiders’ outfits.

The Tusken Raider does suffer one notable flaw, though– his eyes can be wonky.  Hasbro’s figure sculpts the eyes as separate pieces attached to the head, and apparently many of these were not positioned correctly.  The result is a litany of Tusken Raider toys whose eyes aim in different directions, giving him a “derpy” look.  My particular figure fared pretty okay, but anything beyond a cursory glance will still reveal the alignment of his eyes is off. 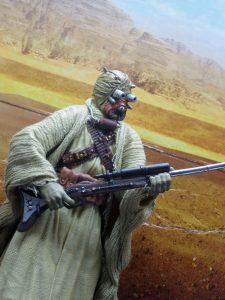 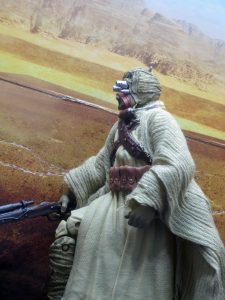 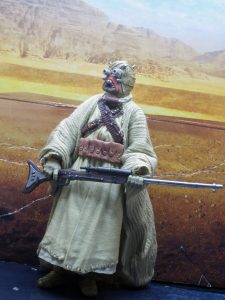 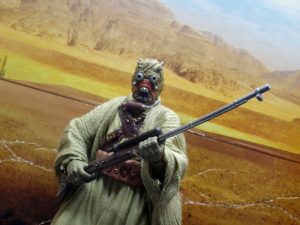 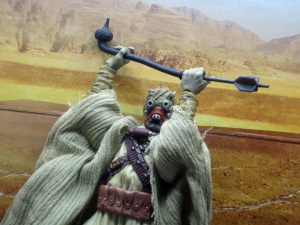 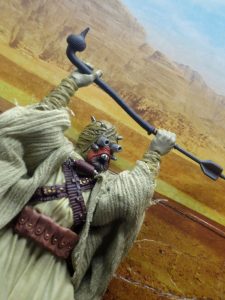 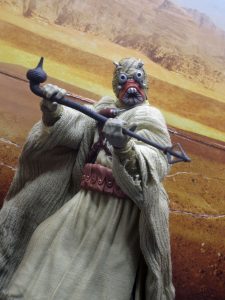 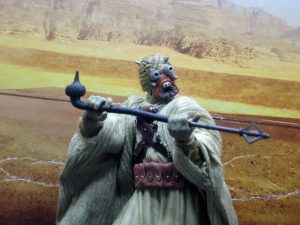 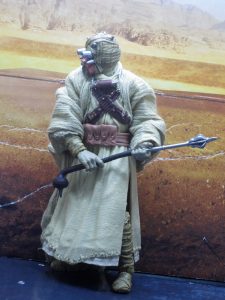 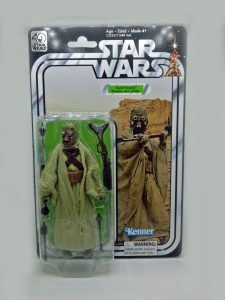 While they’re not without their flaws, overall I appreciate what Hasbro has done with this series.  Would I have liked QC to be better on the Tusken Raider? Sure. Would I have preferred if the “Death Squad Commander” went meta (and off-movie) with a grey uniform to match his 40-year-old counterpart? Again, sure.  But all the same, what we get here caps off the iconic first chapter of the Star Wars toy saga, by filling in the gaps of their modern 6″ scale Black Series lineup.  That these additions– especially the Jawa– are solid toys in their own right only makes that feeling all the sweeter.

Look for the second wave of Star Wars 40th Anniversary figures at Toys R Us and Wal-Marts now.  They’re also available at a number of specialty retailers online, including Dorkside Toys.  I have no idea how long Hasbro will be supplying their 40th Anniversary assortments, before switching gears to focus on The Last Jedi… so my advice would be, if you want to get your hands on these figures… do it now, before it’s too late.