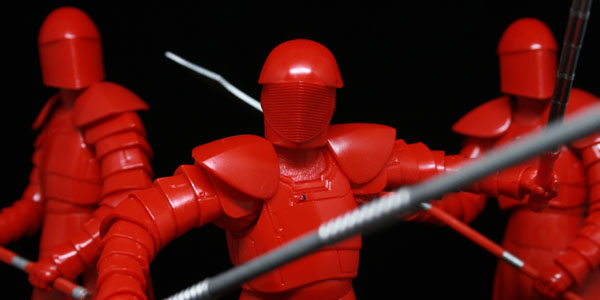 There’s a lot about The Last Jedi that has me dying to see the movie, but toward the top of that list are the weird, cool Praetorian Guards. This detail of elite warriors are Supreme Leader Snoke’s personal bodyguard detail, and they feature a unique design that I love more and more each time I see it.  We don’t have all the details about these guys yet (who, exactly they are, or even how many of them exist), but there ARE a few variations in the style of their helmets and in the melee weapons they wield.

Hasbro is tackling many of these variants in The Black Series, with the release of one style in the Guards of Evil box set, and a second single-packed release. Amazon is offering an exclusive variant that serves as our third Praetorian, complete with a unique helmet and two all new weapons.

Apart from the head and accessories, this Praetorian is identical to the single pack release, with the soft rubber skirt that allows for a great range of motion below the figure’s waist, along with the ingenious articulation hidden into the segmented armor of the guard’s arms and shoulders. Opening this figure reminded me all over again how well executed this completely hidden articulation is… he’s a perfect example of articulation that doesn’t impact the figure’s sculpt at all, and I love it. 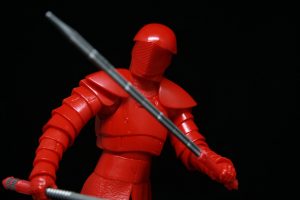 This helm might be the weirdest of the three we’ve seen thus far, with the face shield extending out to a point. He also features a lot of Star Wars-y tech sculpted into the back side of his helmet, which certainly don’t discredit the theory these guards are cyborgs or some sort of droids.

I like the idea that the Praetorians use melee weaponry instead of the typical laser swords we often see in Star Wars. It leaves Kylo and Rey’s lightsabers feeling more special, while introducing a badass all new armory to the universe. My favorite is still the double bladed staff which breaks down into two hand daggers, but the two weapons this figure includes are plenty imposing.

The heavy blade staff is bigger than the other Praetorian weapons, giving off a very anime vibe thanks to its massive scale in comparison to the figure holding it. But the whip-staff is another really cool weapon, a segmented sword which can expand into a flail. That’s the one I’m most looking forward to on screen, and I’m happy to have a toy version from Hasbro… though I’m a bit let down the toy does not expand into whip form. I’m sure we will see another Praetorian at some point, who includes at least a sculpted whip version of this weapon, but for now we’re left with just the retracted sword.

It appears as though each Praetorian brandishes a single weapon, meaning one of the two packed with the Amazon exclusive is an “extra,” which is perfect to mix and match with the mass release guards to fill out a display. We’re only a few weeks away from seeing these warriors in action on the big screen, and thanks to this release, it’s possible to arrange a pretty diverse display of guards to protect the First Order’s Supreme Leader in toy form. You can pick up the Heavy Blade Praetorian now at Amazon. 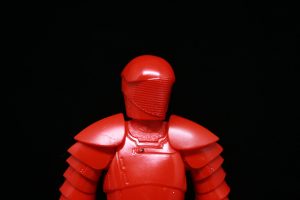 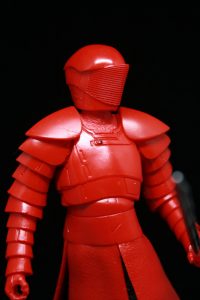 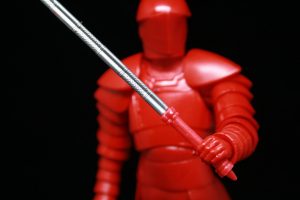 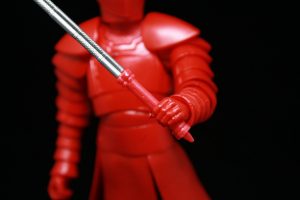 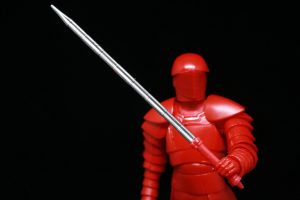 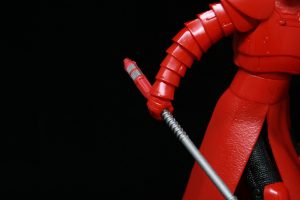 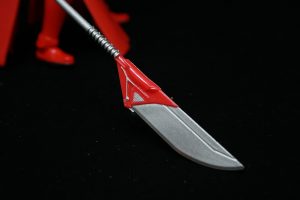 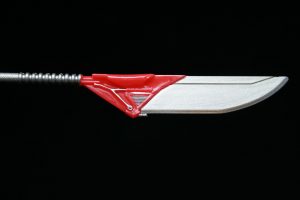 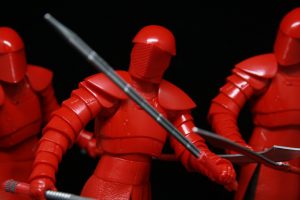