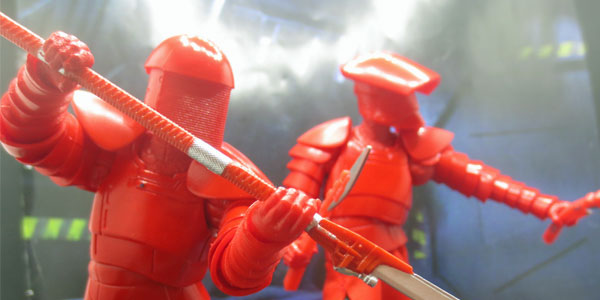 There seems to be a disconnect in Star Wars fandom, a disturbance in the Force, if you will. On one hand, we tend to be let down when the new movies borrow too heavily from what we’ve already seen (which remains the foundation for the most valid criticism of The Force Awakens which I’ve seen, even now two years later). But on the other, there are definitely pockets of fans who are upset when something seems too distinct or “not Star Wars-like.” For some weird reason, this is the complaint that kept coming up when the Praetorian Guards– the defenders of The First Order’s Supreme Leader Snoke– first came to light.

Clad in a mix of crimson armor and robes, with distinctly shaped helms and staffs unique among the Star Wars armory, if anything I would have guessed the Praetorians would be disliked due to their similarity to the Emperor’s Royal Guards from the Original Trilogy.  But instead the resounding first response was they didn’t look “Star Wars-y” enough.

Thankfully, that sentiment is turning around now, and I think Hasbro’s Praetorian Guard action figures have helped their cause. Me personally, I dug the strange design of these guys from the get-go, and I’m happy to hear public opinion coming to join me. While it’s true the Praetorians don’t look derivative of anything we’ve seen in the Star Wars canon– aside from the broad strokes description of guards dressed in red– I think their strange stylistic mix of fencing gear, gladiator segmentation, samurai armor, and a familiar color scheme made them a welcome new addition to the Star Wars aesthetic.

Regardless of the consensus on their look, the Praetorians are here, and thanks to Hasbro, they’re now part of The Black Series. Based on what we’ve seen from promotional materials, there are at least three unique armors among this group, and a variety of weapons. Hasbro released one of the three helms on the Gamestop exclusive “Guards of Evil” Praetorian, and another is being released as an Amazon exclusive this winter. But the third is out now, as part of the second wave of Last Jedi themed Black Series figures. 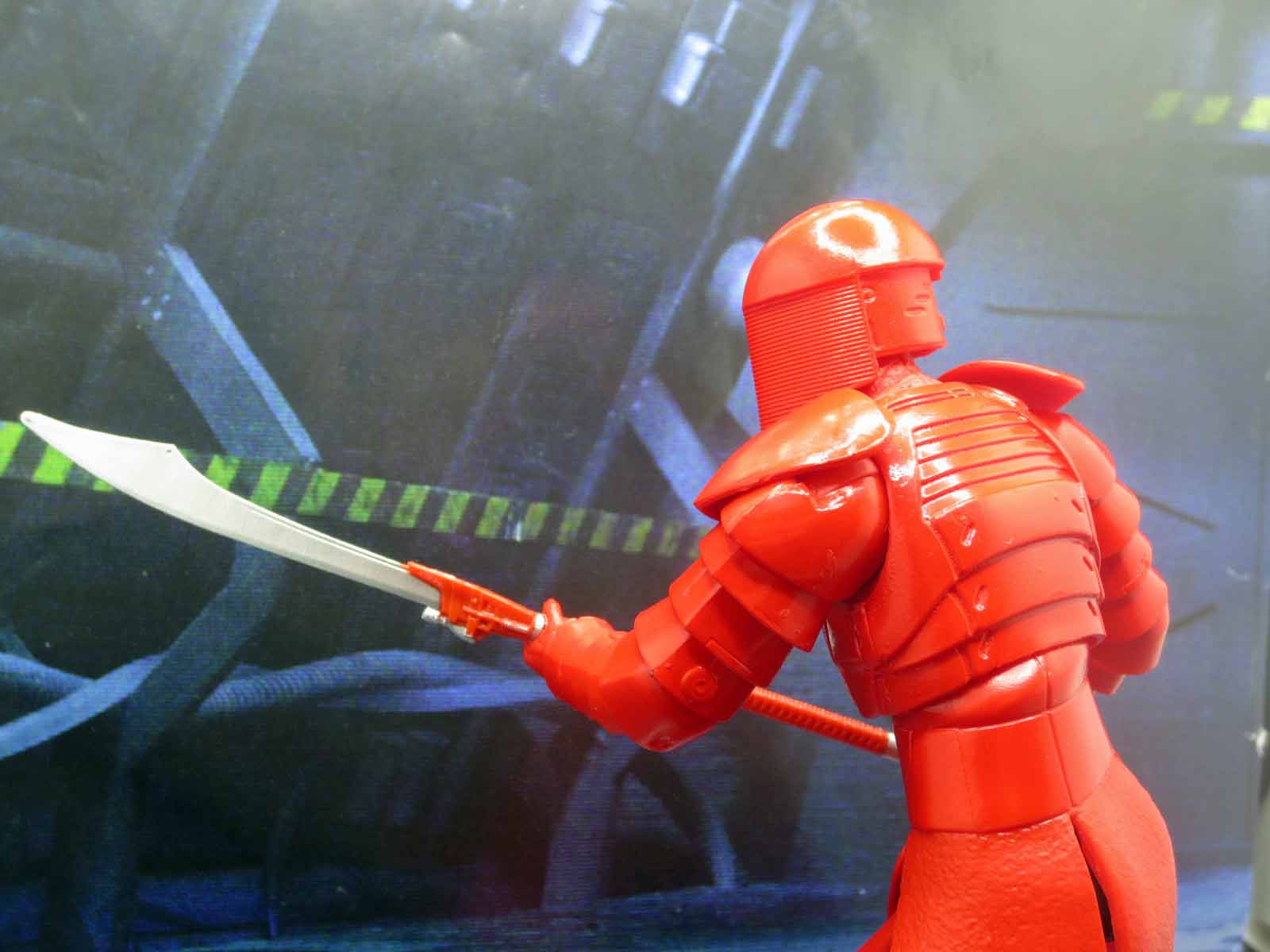 The Praetorian is an all new sculpt, and he’s a remarkably subtle bit of work from Hasbro in terms of both detail and engineering. At first glance, he may seem like a fairly dull, all-red dude, but the Praetorian’s sculpt is filled with nuances such as the ribbing on his mask, the texture on his rubber skirt and black pants, or the mechanics of his bladed staff.

But it’s the engineering on the arms that really makes this figure impressive.  The segmented armor seemed like a logistical nightmare to translate to fully articulated toy form, but Hasbro pulled it off by incorporating dual hinges at the elbow, masked entirely by the armored plats on the figure’s elbows, as well as some smartly designed ball joints on the shoulder pad connectors, which raise, lower, and pivot with the shoulder movement. It’s masterfully done, providing a great range of motion in the figure’s upper body, while not interrupting the sculpt at all.

The Gamestop Praetorian features a cloth skirt, but the single release swaps this out for rubber. I think I prefer this look to the soft goods, as it retains shape and gets closer to a color match with the red plastic of the figure’s upper half, though the stiffer material does inhibit mobility to a degree. I guess it will really come down to how mobile the Praetorians are in the movie… if they sort of just stand there like the Emperor’s Guards, then the rubber would probably be the best approach. But if they’re more active, the freedom of motion the fabric grants would probably account for it’s less appealing aesthetic.  I guess we’ll find out in December?

In the meantime, though, you can find the single boxed Praetorian in the latest wave of Black Series figures hitting stores now.  The Gamestop edition is only available in the Guards of Evil box set which you can order here, and the third Guard is up for preorder now at Amazon. 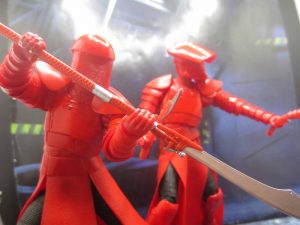 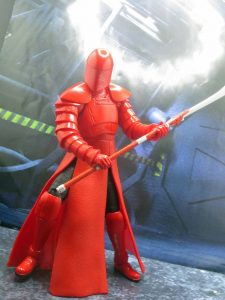 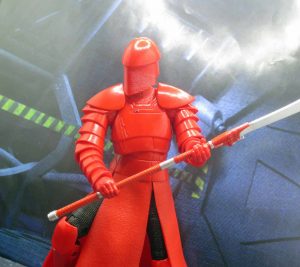 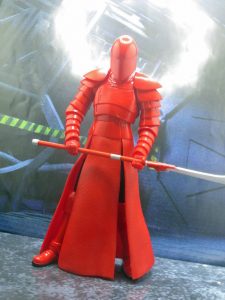 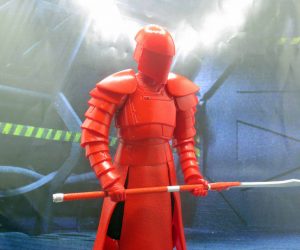 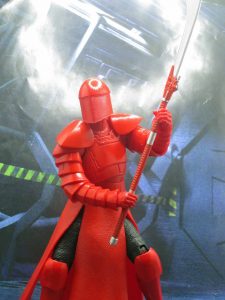 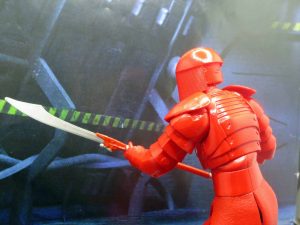 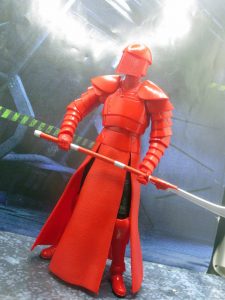 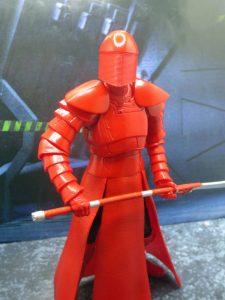 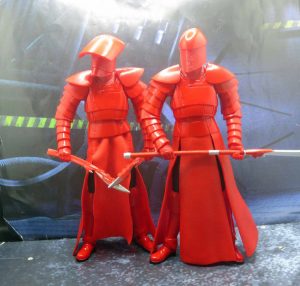 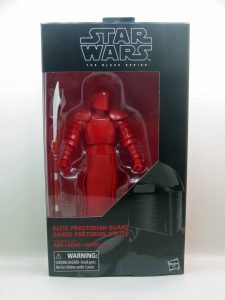 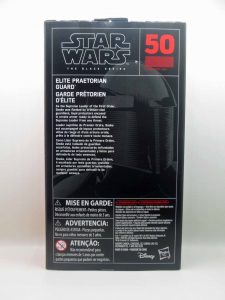