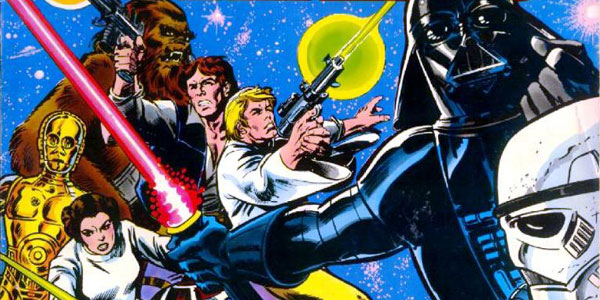 Star Wars comics are returning to Marvel in 2015.

I honestly hadn’t considered it, but it makes too much sense in retrospect… Star Wars’ comic books are moving back to their original publisher, Marvel Comics in 2015.  Since Marvel was the first company to publish Star Wars comics, and since both companies are under the Disney umbrella, this move seems like an obvious one.

What remains to be seen is how well Marvel will handle the license.  Obviously, Episode VII is going to be a big deal, so I’d assume Disney will want Marvel to put their A-List talent on the comic books for the property.  But while Marvel may have had Star Wars comics first, it’s the Dark Horse books more than anything else that have made the Expanded Universe what it is today.

Without the Star Wars cash cow, I’m most curious what Dark Horse’s future will be.  Obviously, they still have a lot of other major anchor properties like Zelda and Halo and Conan, and they have a big, strong stable of creator-owned titles from Hellboy to newcomers like Mind Mgmt, The Victories and my personal favorite The Massive.  I have no doubt Dark Horse will be fine post-Star Wars.

As for the new Marvel Star Wars, I have high(ish) hopes.  I’d guess we will see tons of supplemental stories revolving around the new trilogy, at least at first.  The original Marvel series, lasting for more than 100 issues, was an ongoing.  Most of the Dark Horse books were mini series spread throughout the Star Wars universe.  I can see Marvel going either way once they get the reins in 2015.

Here’s what Mike Richardson of Dark Horse had to say about the new home for Star Wars comics:

After a history of movie properties being poorly handled with little regard for execution and continuity, Dark Horse took a new approach, carefully choosing licenses and approaching them with excitement and creative energy. Our goal was to create sequels and prequels to the films we loved, paying careful attention to quality and detail, essentially treating those films as though they were our own. Star Wars has been the crown jewel of this approach. We began chasing the title as far back as 1989, and with the launch of Tom Veitch and Cam Kennedy’s Dark Empire, a new era in comics was born. I’m not ashamed to admit that we were Star Wars geeks, and we have been determined to spare neither effort nor expense in the pursuit of excellence.