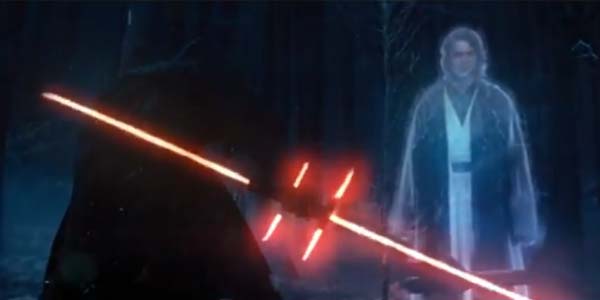 Okay, so maybe it’s starting to feel unnecessarily mean, making fun of George Lucas and his truly awful Star Wars prequels. But when I see a gag like this, a fan-edited “Special Edition” of The Force Awakens‘ trailer, I can’t help but laugh.

The trailer plays out exactly like the real one, except for the inordinate amount of extra CGI crap artlessly piled into every frame… So now John Boyega frantically looks around not an empty desert, but one filled with Dewbacks and other creatures… the Millenium Falcon is pitted in a dog fight against, like, 80 Tie Fighters instead of two… and our new bad guy’s lightsaber broadsword now had SIX prongs, making it the least practical weapon of all time.

It’s very well done, and it totally nails not only what Lucas got wrong (visually) with his prequel movies… but also how much the new teaser trailer gets right.  JJ Abrams’ frames are simple, clean and not overcrowded, and we get no fan pandering or character call-backs (unless you count the Falcon).  It actually FEELS like Star Wars, which is something the prequels rarely managed to do.