The New Star Wars: The Force Awakens Trailer Is Incredible 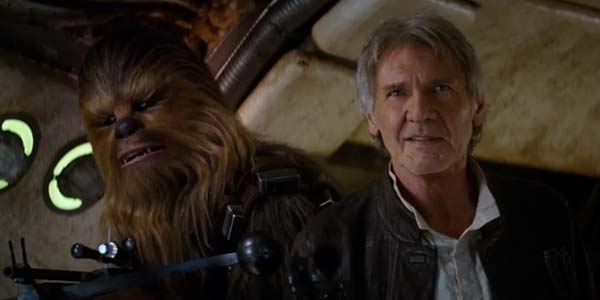 Star Wars Episode VII has been slowly wearing down my skepticism for a long, long time now.  But this new trailer… this is something else.  Maybe it’s because I’m riding the contact high after finally finishing the actually really goddamn good Star Wars: Rebels, or maybe it’s the established talent of JJ Abrams’ creative team to cut together a totally efficient trailer, but these two minutes take my anticipation for The Force Awakens to an entirely new level.

It’s really stunning stuff, and all sorts of evocative images– a crashed Star Destroyer, buried in the middle of a vast desert! Our first look at the chrome-armored elite Stormtroopers!  The charred skull and helmet of Darth Vader!

We get the perfect mix of nostalgia and intrigue as Luke Skywalker’s voiceover (addressed to whom, exactly?) mentions The Force as a power his father HAS… not HAD… And that last shot, and that last line… as we see Han Solo and Chewbacca take the screen for the first time in 32 years, through our collectively misty eyes… I am still reeling from everything on display here.

Some more of my initial thoughts:

Today is the first GREAT day to be a Star Wars fan in a really, really long time.  I am so excited right now, you guys.