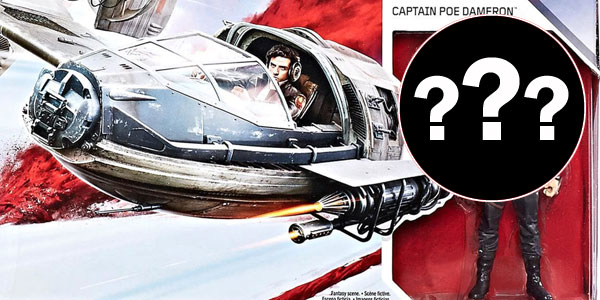 From playsets to vehicles to the Force Link wrist band, we’re running down which new Star Wars action figure pack-ins are worth the purchase.

It’s been pretty much a thing since the dawn of action figures.  Most of them, you can buy on their own, but there’s always those few exclusive figures who only come packed with larger purchases such as vehicles and playsets. Sometimes a good pack-in figure can justify the purchase of a bigger item, even if you would have skipped it otherwise. Other times, the figure can at least feel like added value we get along with a really great vehicle. And yes, there are times when a pack-in figure is just a slap dash after thought, created as cheaply as possible and tossed in simply for the sake of including some sort of figure.

Hasbro is keeping the pack-in figure flame burning bright, especially in their Star Wars toy line, up to and including The Last Jedi collection. And they’ve made some really great figures to go with the variety of vehicles, playsets, and Force Link wrist bands they’ve released! But whether it’s concerns over space or money, going all-in on a toy line is something many of us have to contend with… so in that regard, I wanted to share my thoughts on which pack-in exclusive figures are most worthy of your consideration. 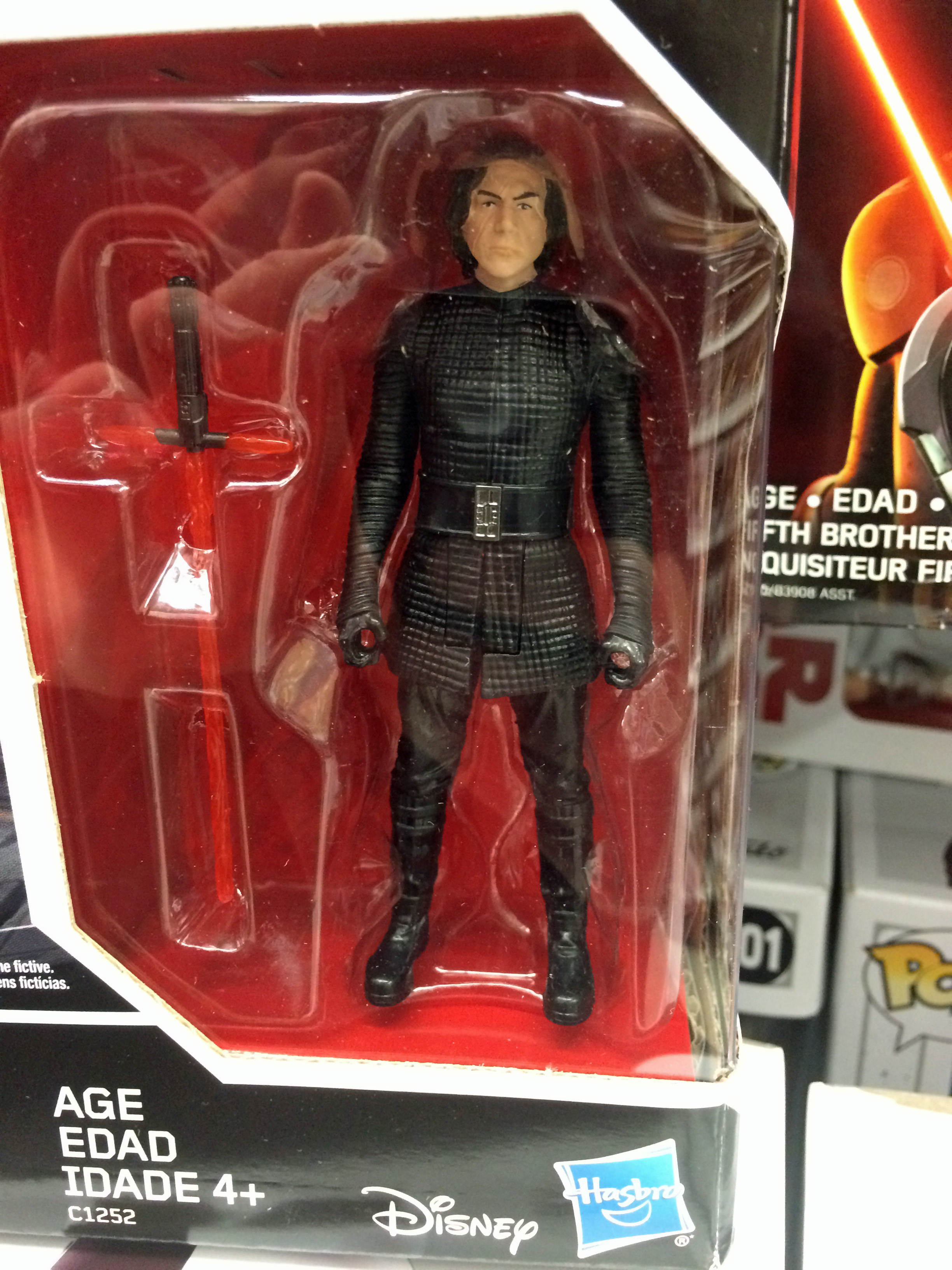 If there’s one loser in The Last Jedi assortment, it’s the Kylo Ren packed with his TIE Silencer. This guy is a straight recast of the single packed Force Link Kylo… but with no cape and a worse paint job on his face. This would have been a perfect opportunity for Hasbro to paint on the stitch/ bandage thing seen on Ben Solo’s face in the latest Last Jedi trailer… especially since Kylo is seen with that look in the cockpit of his starfighter.

DO I NEED TO OWN THIS FIGURE? Nah. 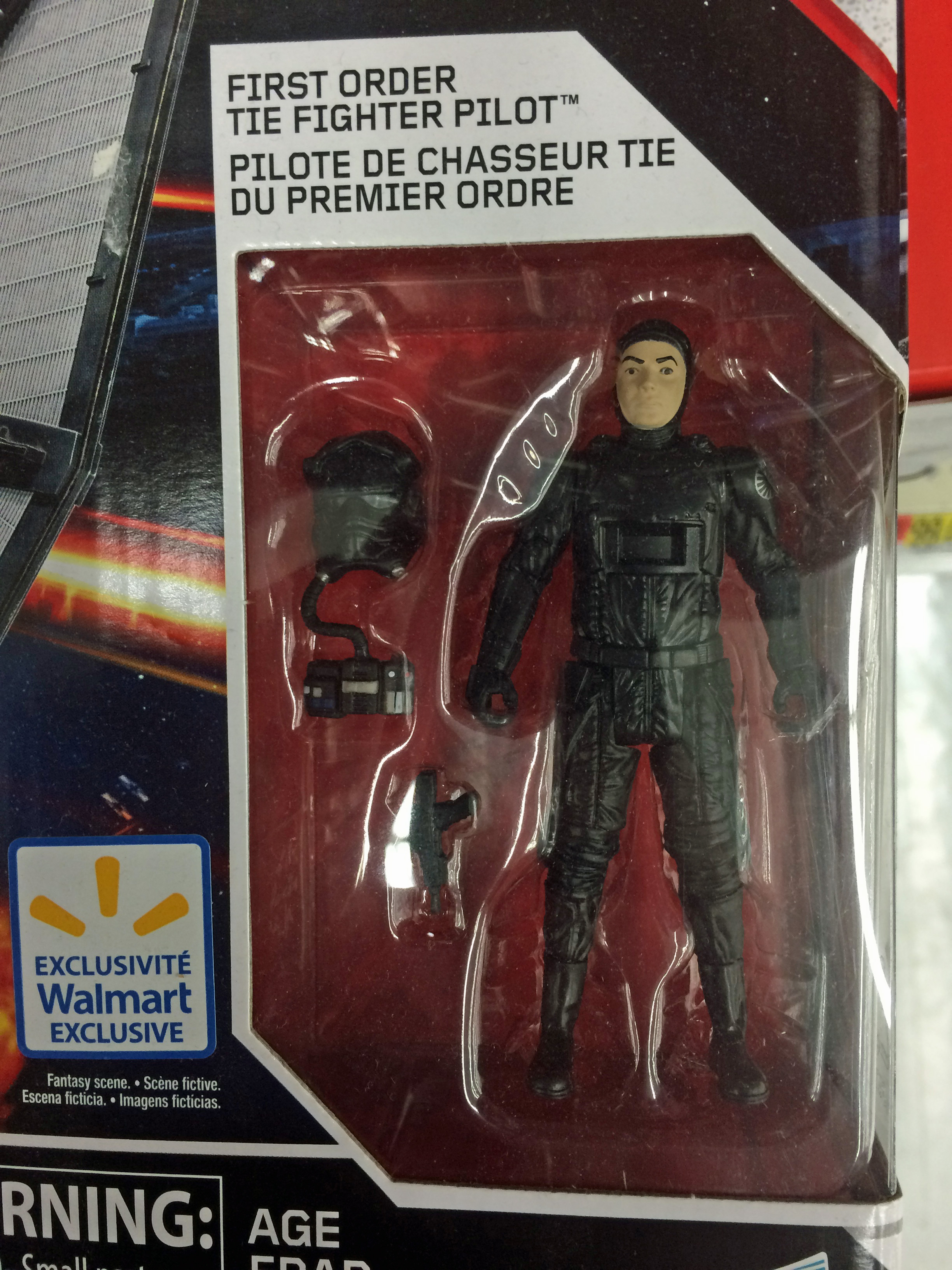 The First Order TIE Pilot is certainly not a bad figure… but he IS the one and only straight repack from The Force Awakens collection. So chances are, he’s already part of your collection… though as an army builder, you can always use extras. The figure himself is one of 2015’s highlights, with a nicely detailed sculpt and a removable helmet, which is welcome… even if it’s slightly betrayed by the unsightly plug in the figure’s chest when the breathing apparatus is removed. The TIE Pilot and his ship have been re-released with a Force Link upgrade only at Wal-Mart.

DO I NEED TO OWN THIS FIGURE? You probably already do, but hey– Force Link. 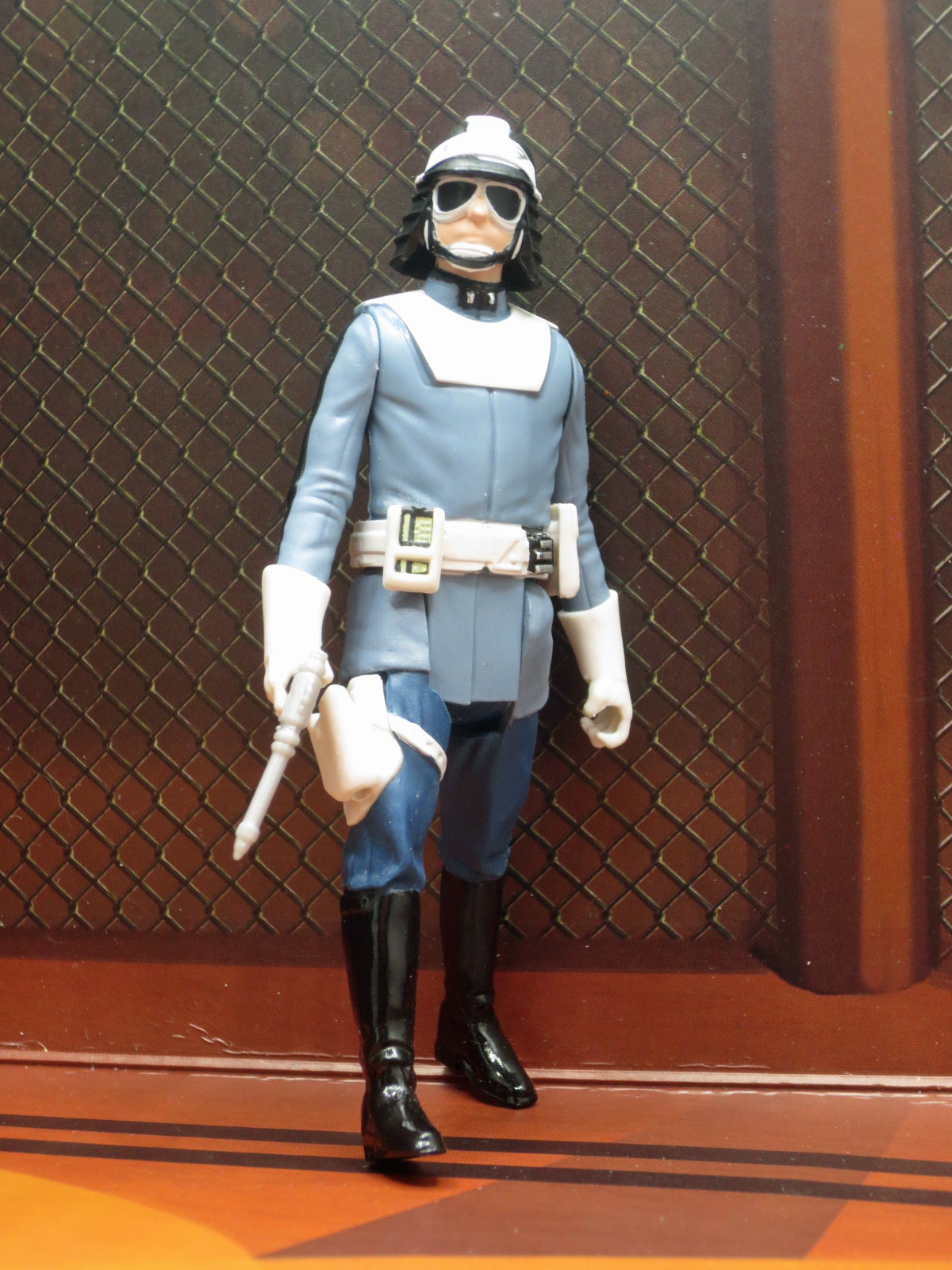 Here’s a tough one to weigh in on. The Canto Bight Police Officer is an all new figure, and a character we’ve only seen released with his speeder vehicle. He’s also one of the few background characters (presumably) we’ve seen thus far in Hasbro’s toy line. But, despite those appealing features… he’s not that great a figure. The sculpt lacks detail and is weirdly proportioned, making him look more like an animated figure than a live action one. And his stiff legged stance makes him look awkward riding his vehicle… which is kind of his entire point.  At least Hasbro gave him a working holster for his blaster.

DO I NEED TO OWN THIS FIGURE? “Need” seems a little strong. 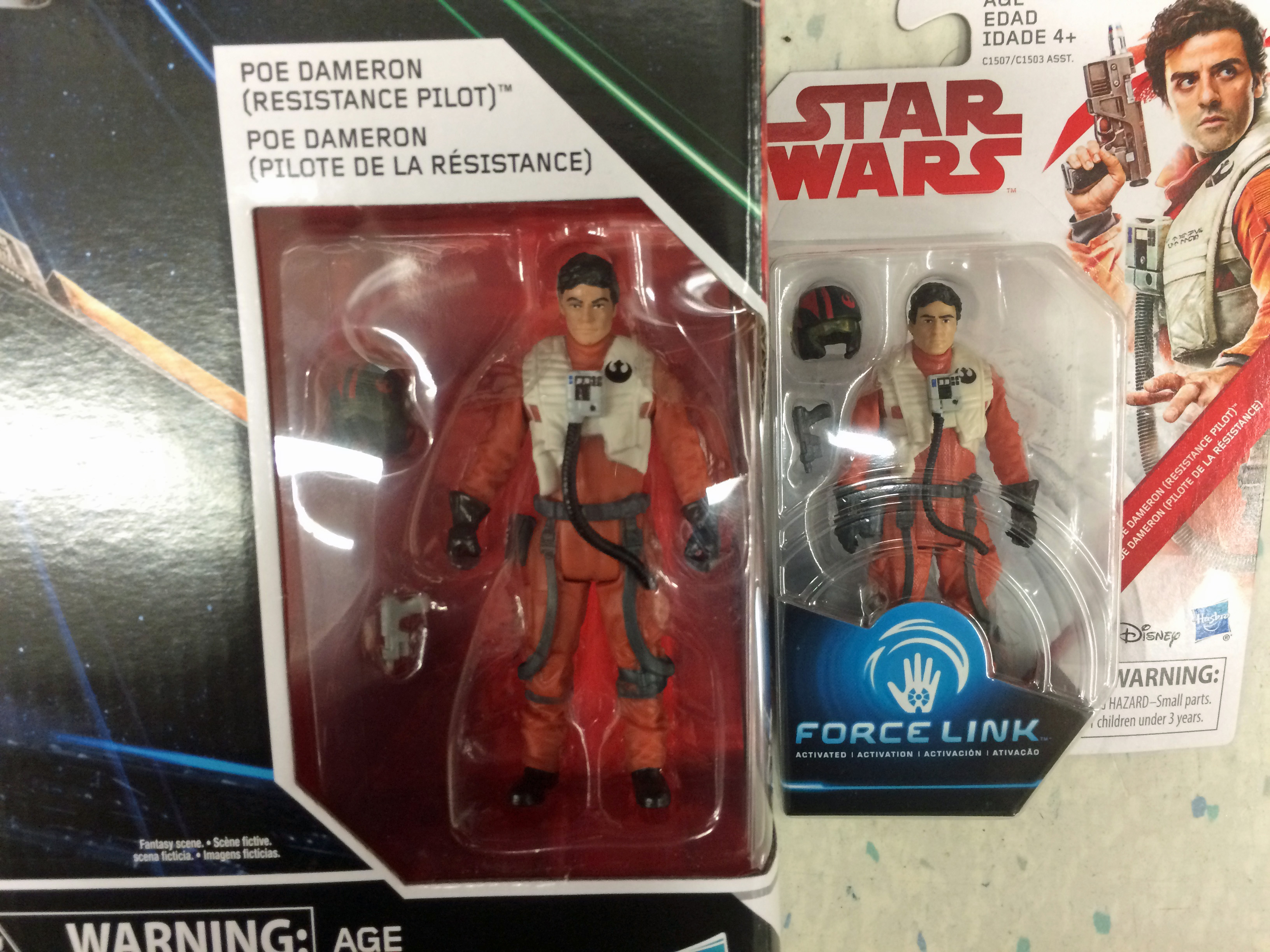 This one’s a tough call. We’ve got two X-Wing pilot Poe’s in The Last Jedi collection, and each is superior to the other in one way. The single card release features a great new sculpt that adds a ton of wonderful detail to the outfit… along with swivel wrists. The Poe packed with the Toys R Us exclusive boosted X-Wing reuses The Force Awakens pilot body, but features an all new head that features a MUCH better likeness of Oscar Isaac. It really comes down to personal preference… do you choose the better body, or the better face?

DO I NEED TO OWN THIS FIGURE? Let’s see how relevant the “boosted” X-Wing is to The Last Jedi’s plot. 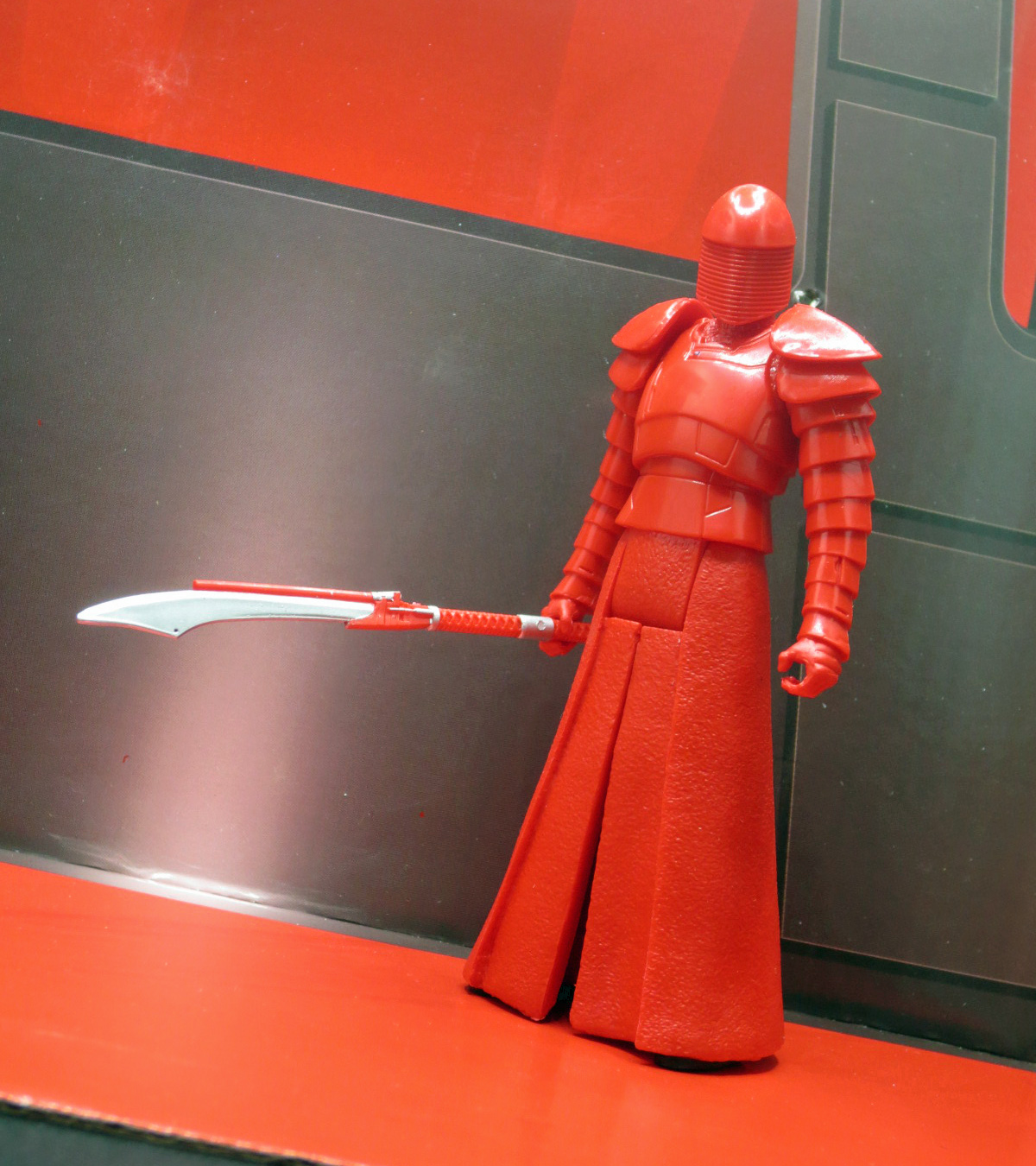 I’m in that growing minority that loves the look of Snoke’s Praetorian Guards, so I was stoked to get my hands on the exclusive figure released in the BB-8 Mega Playset. The figure uses the same body as the Rey two-pack, but with a unique helmet and a single-bladed staff.  It’s a good figure, and it’s nice to have this armor in 3.75″ to match the two pack version.  However, it should be noted, this guy is the same armor as the 3.75″ Black Series release, from the helm to the weapon, so you might want to consider that Wal-Mart exclusive as a more cost effective alternative.

DO I NEED TO OWN THIS FIGURE? Maybe opt for the Black Series, if you don’t mind the soft goods skirt. 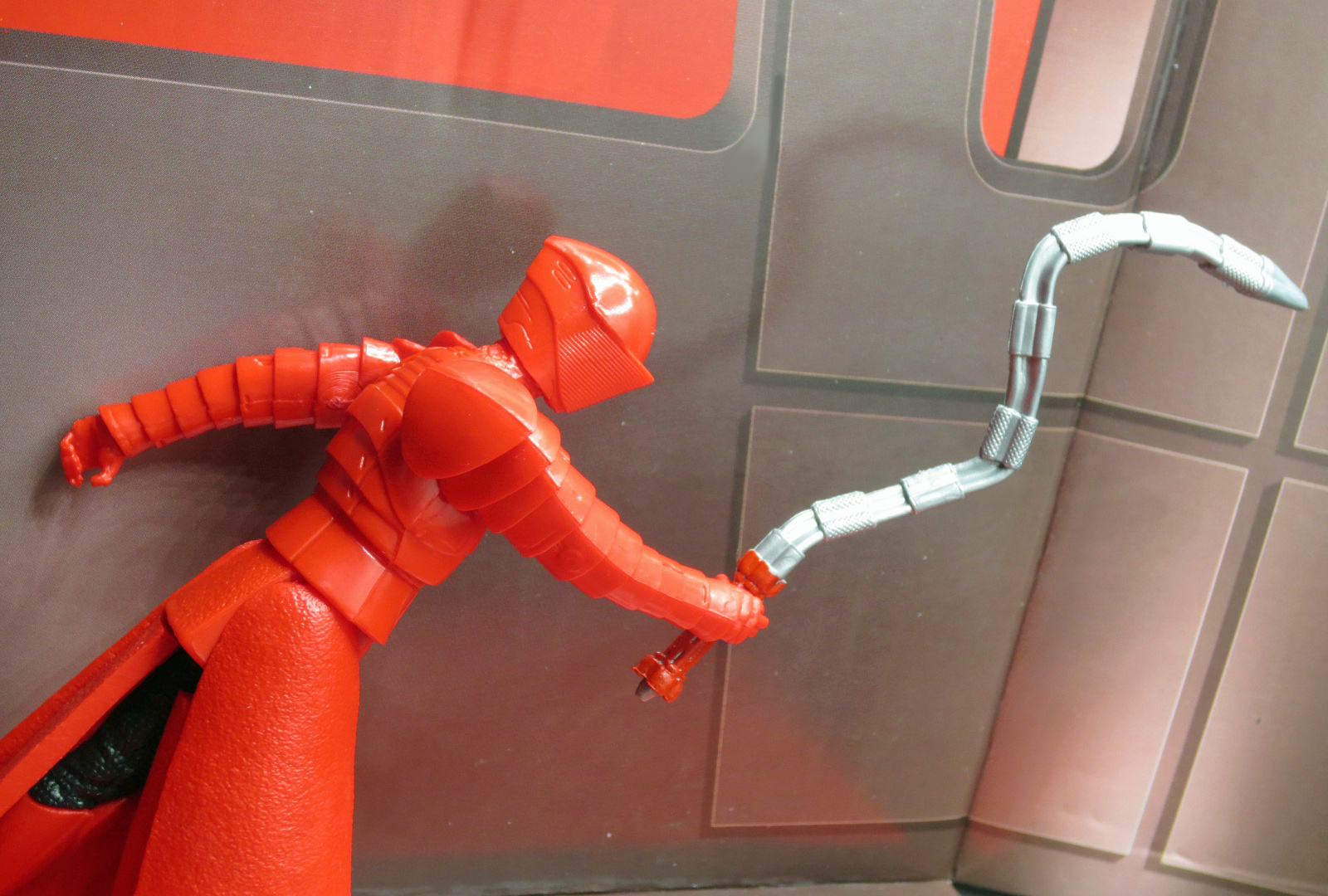 This figure is very similar to number 7. The only differences are a unique headsculpt and a pair of new weapons, both variants of the whip-staff which converts from a sword to a flail. This variant Guard is part of the Toys R Us exclusive Force Link starter pack, and really there’s only two reasons he ranks higher than his counterpart: A) His helmet looks weirder, and B) He’s got two weapons instead of one.

DO I NEED TO OWN THIS FIGURE? YES. 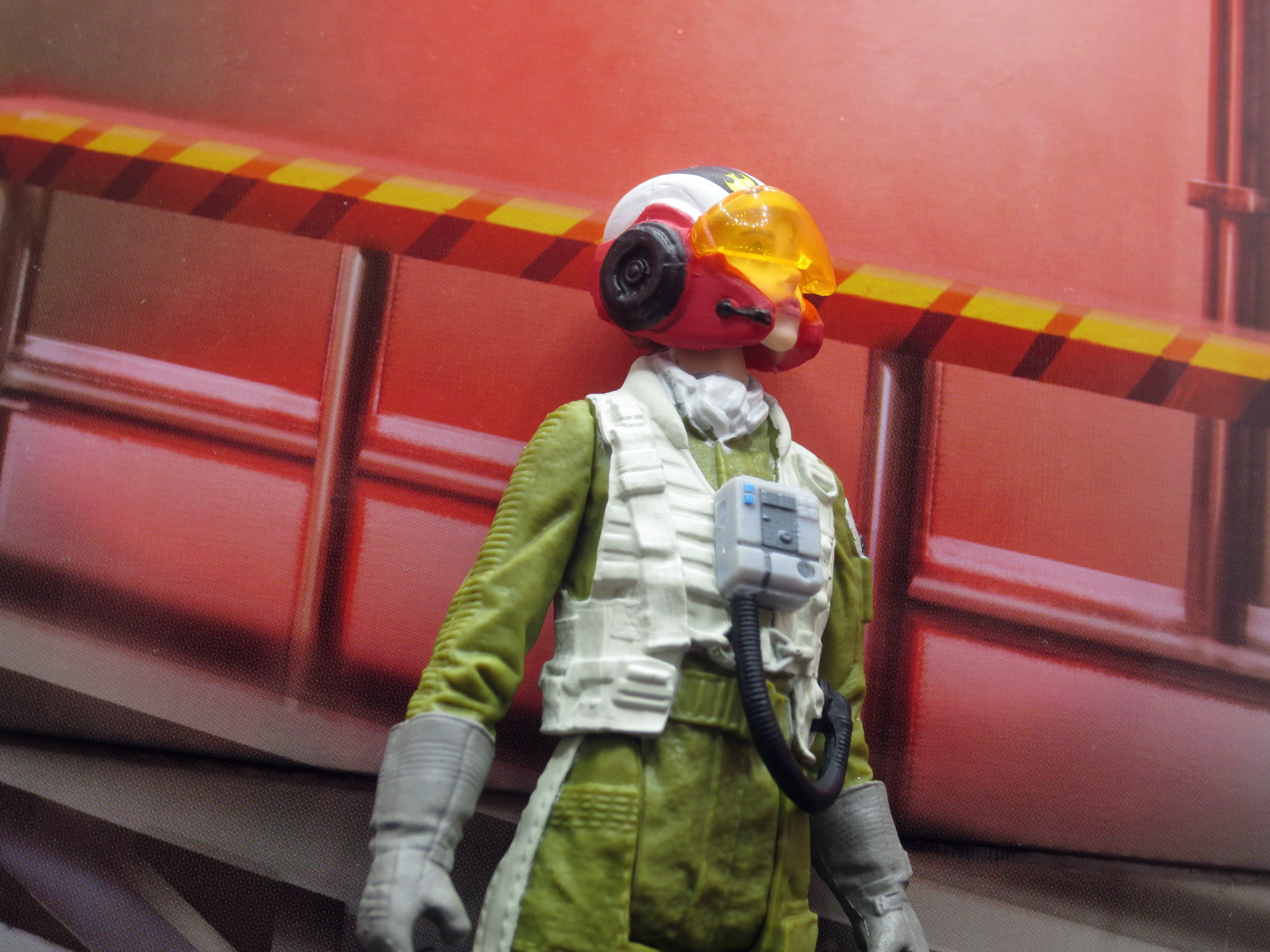 Pilots always rule, and Tallie is no exception. She flies for The Resistance, and makes smart reuse of the Paige Tico figure released in the first wave of Last Jedi Force Link figures. Tallie doesn’t have quite the same level of detail as her fellow pilot… her helmet is molded on her head and she lacks a breathing mask. But she gets a nice, translucent orange visor and a new deco to reflect the A-Wing flight suits. She’s a solid figure, especially if you’re as into Rebel pilots as I am.

The Force Link is one of the coolest gimmicks I’ve seen in a long time. The chips built into each figure are completely non-intrusive, and the dialogue and sound effects sound great when activated through the Force Link wrist band. And the best part is, each Force Link version includes at least one exclusive action figure! The mass release Force Link Starter Set (there’s another coming in December at Toys R Us with two different figures) includes our only 3.75″ masked Kylo Ren in The Last Jedi assortment.  But this figure holds more appeal than just the helmet… he’s actually a brand new sculpt, and his subtle action pose is WAY cooler than the other Kylo figures in this scale. He’s got one hand posed to wield the Force for his latest dark purposes, and legs slightly askew in an action pose. Plus, he’s still got the removable cape and cross guard lightsaber, making him a perfect variant to the unmasked Kylo figure.

DO I NEED TO OWN THIS FIGURE? Probably! 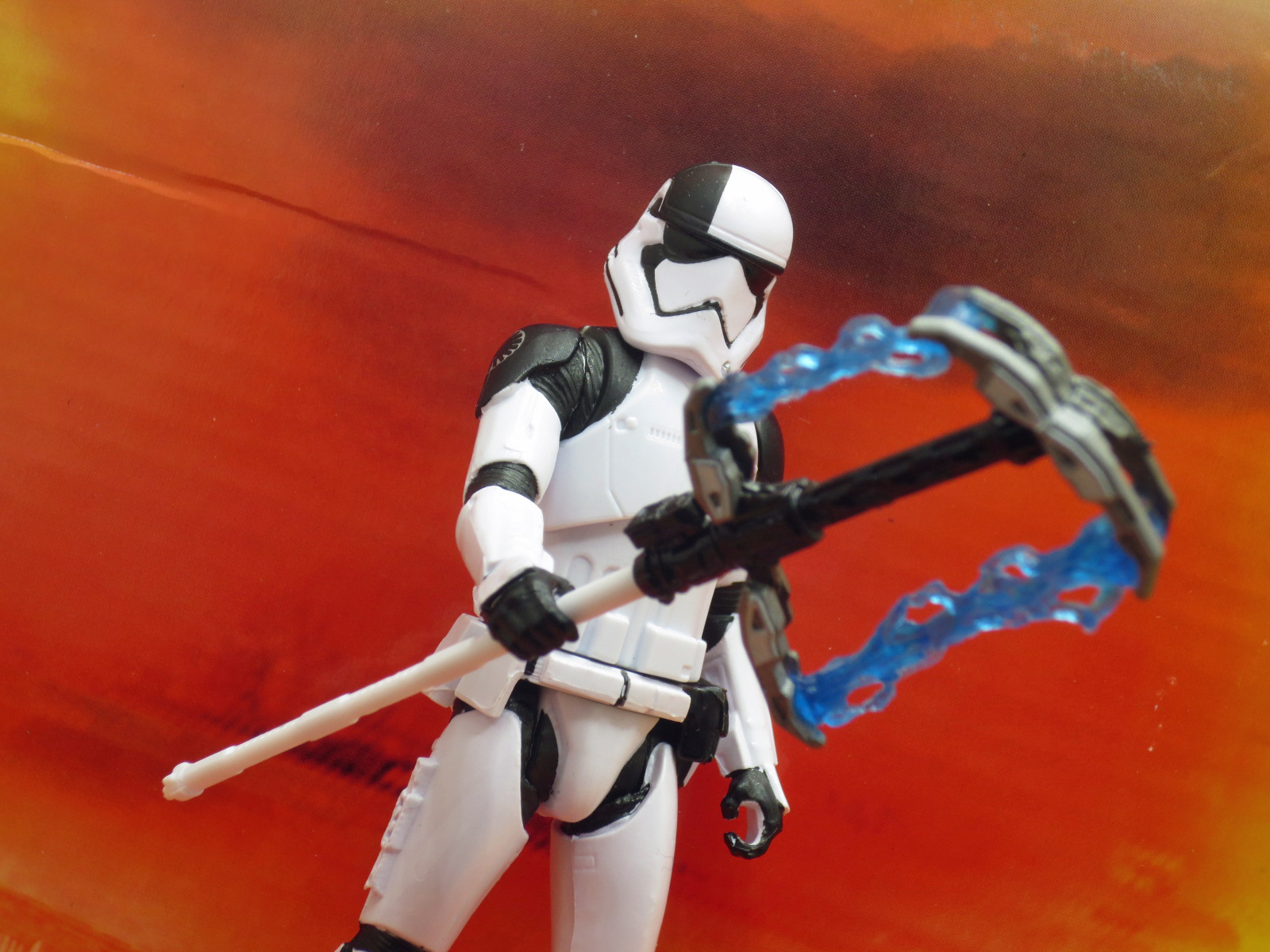 The only new Stormtrooper variant we know of in The Last Jedi may play a significant role in the movie, and looks super cool with his electro axe and black accents on his armor. We saw a 3.75″ Black Series version already, but I actually prefer the 5 POA figure because he fits better with my other Stormtroopers, includes a sturdier, but no less detailed, version of the axe, and also features his standard issue First Order blasters. He’s part of the Toys R Us exclusive Force Link starter set, with a unique Praetorian Guard figure, making this one of the more appealing retail exclusives you’re likely to find.

DO I NEED TO OWN THIS FIGURE? YES! 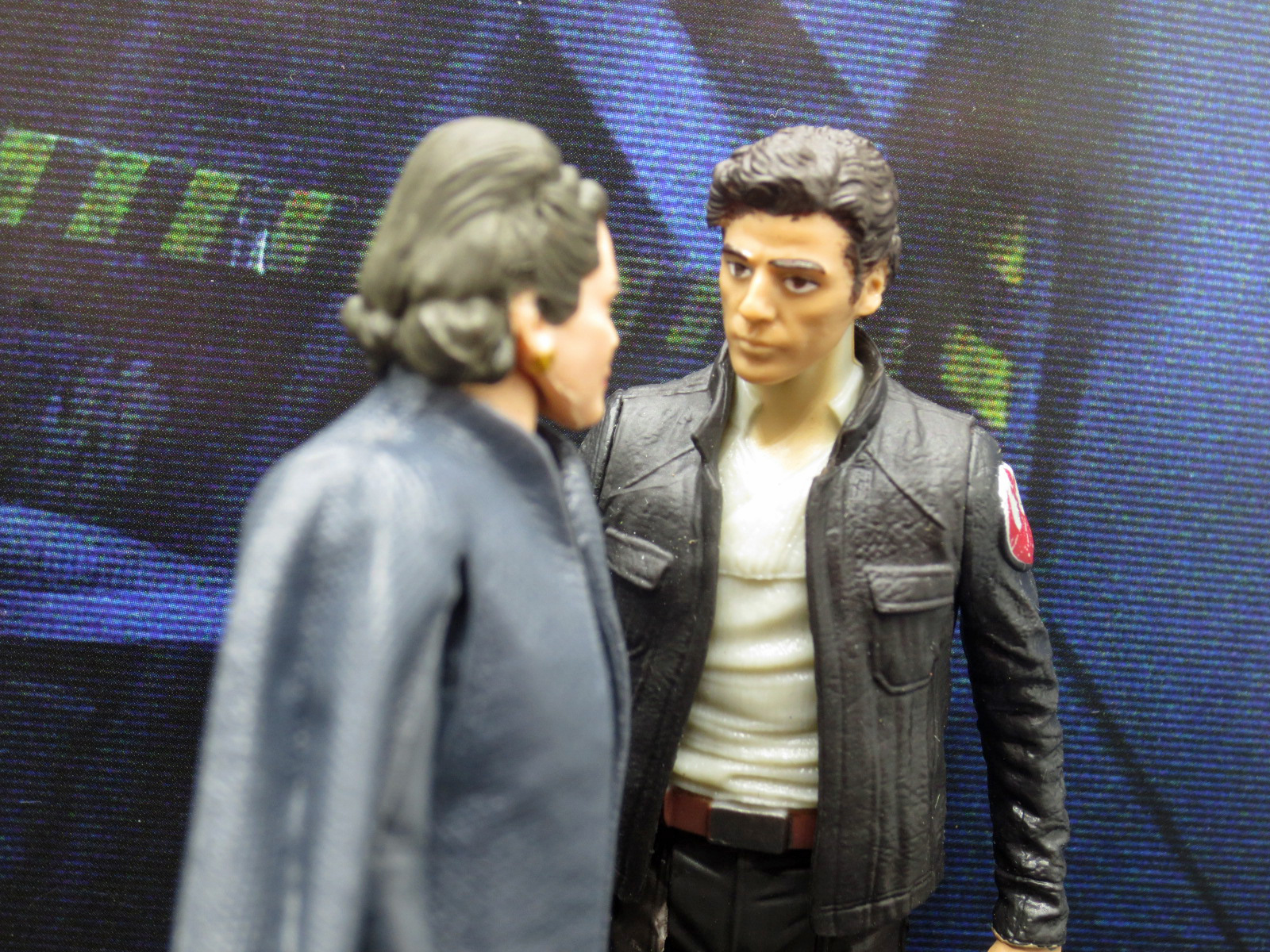 Speaking of excellent variants, Poe Dameron is decked out in his new Resistance Captain uniform with the Ski Speeder vehicle, and this thing is worth the price for him alone. It’s one of the best sculpts we’ve seen in Hasbro’s 3.75″ basic series, and easily the best likeness of Oscar Isaac in this scale. He sports a blaster with working leg holster, and even his communication headset… even the 6″ Black Series figure doesn’t include that! From the look of things, this will be Poe’s main look in The Last Jedi, and this figure is a great toy representation.

DO I NEED TO OWN THIS FIGURE? YES! 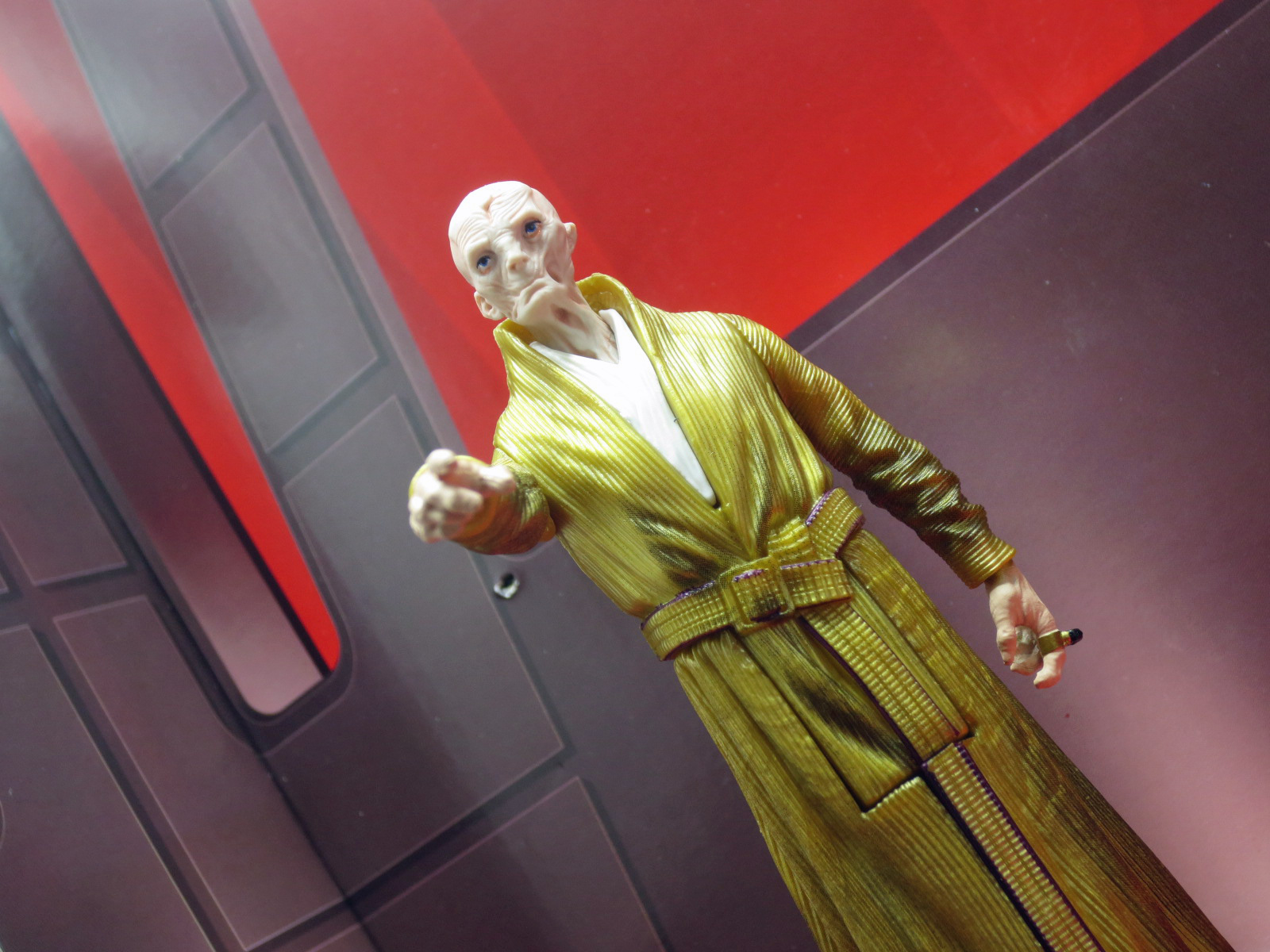 In most toy lines, Poe would be at the very top of this list. But Hasbro really killed it with Supreme Leader Snoke, who is the second figure included exclusively with the BB-8 playset. Snoke stands over 4″ tall, towering over the other figures in the series, and he features a ton of detail considering the smaller scale. From the texture of his gold robes to the nasty, desiccated skin on his face and hands, this figure is quite visually dynamic. He also simply screams “bad guy,” which is enhanced thanks to his creepy pointing/ Force wielding hand.

DO I NEED TO OWN THIS FIGURE? ABSOLUTELY, YES!

So there you have it.  The must-own pack-in figures in this collection are Poe, masked Kylo, and Snoke… and thankfully each is packed with something awesome! Beyond that, there’s some neat characters packed with The Last Jedi’s vehicles, though none of the figures are integral to the collection, especially if you’re not into the vehicles themselves.