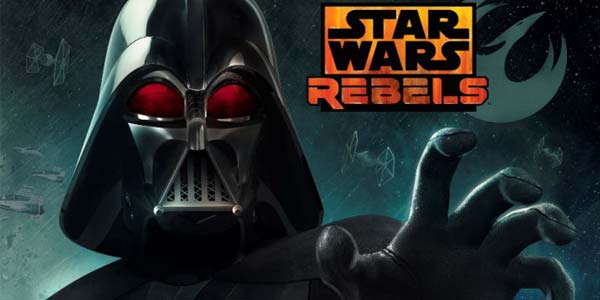 Some familiar faces, good and evil, are about to join in on the dawn of The Rebellion.

I’m late to the party with this, but OMG you guys– Star Wars Rebels is awesome!  I sailed through the first season in a matter of days, and I’m not sure if I was viewing it through a post-Force Awakens lens, or if this show itself is what rekindled my love of Star Wars, but one thing’s for sure– Rebels is a strong building block in Lucasfilm’s current game plan.  It’s the first new Star Wars thing from the Disney era, meaning the show will be a clearly defined part of the larger Star Wars narrative… and it deserves to be.

Here’s the most amazing thing about Rebels— it manages to tow the line between being its own unique story, yet still feeling like a legitimate chapter in the overall saga.  The show accomplishes this nigh-impossible task with confidence and ease, thanks to an interesting in-universe backdrop (15 years after the prequels, as the Empire settles into its dominance over the galaxy, and the Rebellion is just starting to take shape), and a great cast of characters.

As I was watching Rebels, I realized there’s one really big sci-fi trope which Star Wars has never jumped on, until now– the rag-tag crew of a ship.  We’ve had heroes and smugglers and princesses and knights and armies… but Rebels is the first time we’re following a small core cast who live and work in the close quarters of a single ship.  And the crew are all unique, standing on their own as opposed to aping traits we already know from the cast of the Original Trilogy.  The crew of the Ghost doesn’t have a Han Solo type… Kanan Jarrus is an entirely different kind of Jedi, an agnostic whose faith in himself and his order was shaken to its core when pretty much everyone but him wound up dead… even Chopper the Astromech droid has an entirely different personality than R2D2 (though he’s every bit as feisty).

The other aspect of Rebels that works impossibly well?  The established characters coming in as supporting players.  Season One saw C3PO, R2D2, Bail Organa and Lando Calrissian all play roles in certain episodes, and all served the greater story.  This show is very smart about how it uses these characters– we’re not seeing a parade of pointless, fan servicing cameos for no reason– and it looks like that trend is continuing in a BIG way in Season Two.

At the end of Season One, Rebels definitely shook things up.  The main villain of the series, The Inquisitor, was killed off, motivating the Emperor to bring in his number one Jedi hunter, Darth Vader to deal with our heroes personally.  And the true nature of the Rebellion was revealed, courtesy of the Ghost crew’s secret informant Fulcrum, who turned out to be Ahsoka Tano from The Clone Wars cartoon.  This sets the stage for a more expansive new series, one that moves our heroes outside the confines of the Lothal system and into the greater Rebellion, which is being assembled by Ahsoka using cells and sects such as the Ghost crew from all across the galaxy.  But just as the Rebellion is gaining momentum, Darth Vader is coming for them all… including his former apprentice Ahsoka.

Just writing the broad strokes of this plot has me geeking out.  This is pure pulp sci-fi done right, with an exceptional knack for escalation and legitimate stakes at play.  Season One proved the show won’t shy away from killing off main characters, and it’s impossible to ignore that at least some of our heroes are pretty much destined not to survive to see A New Hope.

But man, this trailer… I love that James Earl Jones is back as the voice of Vader.  I love even more that this is the first time since 1983 that Darth Vader has actually felt like a truly dangerous presence.  His redemption– to say nothing of his mishandling in the prequels and his mascot-level presence in Star Wars merchandising– has left this villain de-fanged for decades, but here, he’s a straight-up bad guy.  Not only that, he’s playing the bad guy at least I know I’ve wanted to see in action since I was a kid.  The ruthless Jedi hunter, the badass SO BAD that every Imperial (not named Tarkin) trembles in his presence… or should, at least.  This teaser suggests Rebels will wisely establish Vader not as a conflicted anti-hero, but as a gravely serious threat.  And since his reputation is firmly in place during Episode IV… his presence here also adds more shade to the fate of the heroes of Rebels.  I cannot wait to see how this all plays out.