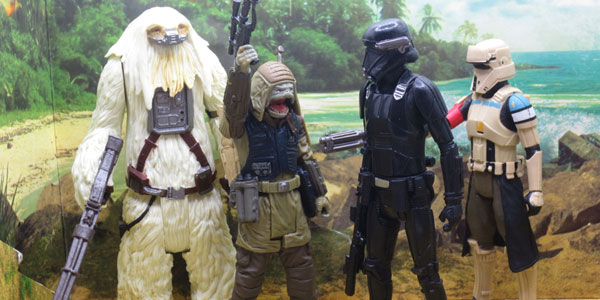 The Rebels and Imperial forces each get some new recruits in Hasbro’s first wave of Rogue One two-packs.

Much of Hasbro’s Star Wars Rogue One toy line is modeled after the SKUs seen in last year’s The Force Awakens collection, although the two-packs of action figures and deluxe figures have sort of merged into one new platform, featuring two 3.75″ toys along with a goofy, oversized weapon rig for one of them to wear.  It’s a fine enough structure in terms of play action (especially since the bigger accessories do not inflate the still-$15 price tag per set) but more than anything this set once again is mostly a way for Hasbro to pump additional characters into their toy line.

In this specific case, we get two sets based on Rogue One– each featuring a new Imperial soldier and an alien– as well as a non-cinematic Poe Dameron variant packed with a First Order Snowtrooper.  I passed on that last set, but both Rogue One packs looked so cool, there was no way I was leaving the store without them. 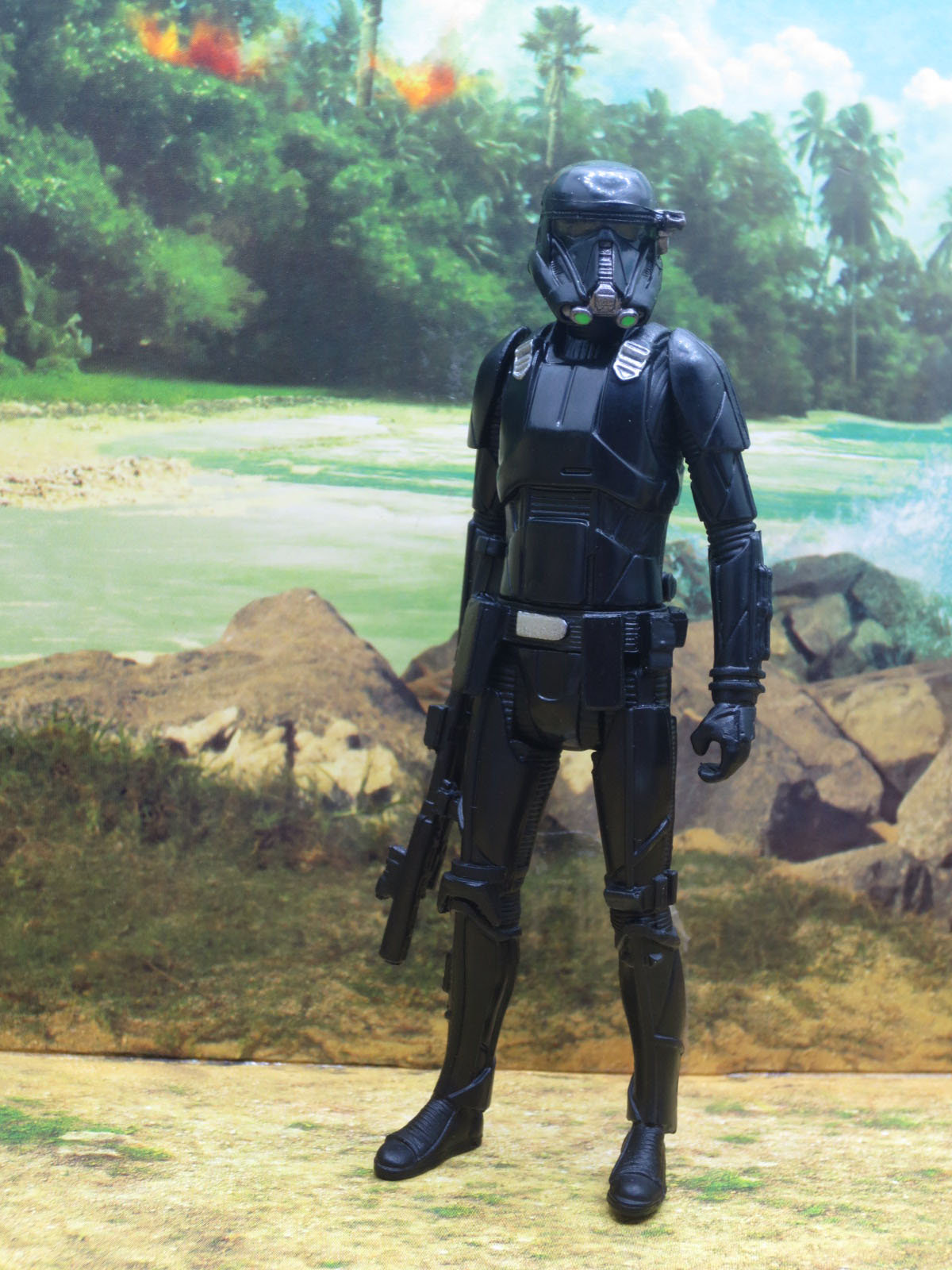 The first pack features Rebel Commando Pao, one of the few alien members of the Rogue One team, alongside a Deathtrooper, the new elite soldiers to be featured in the movie.  Obviously, at this point all we have to go on about the first “Star Wars Story” is what we’ve seen in the trailers and promotional materials, but it’s easy enough to glean that the Deathtrooper will play a significant role in the film.  He makes for a good figure, in his shiny black armor and green-tinted helmet.  There’s something sleeker and more ferocious about this armor design than the standard Stormtrooper, which leaves him with a rather imposing presence… helped along by his tall, un-naturally lanky stature. 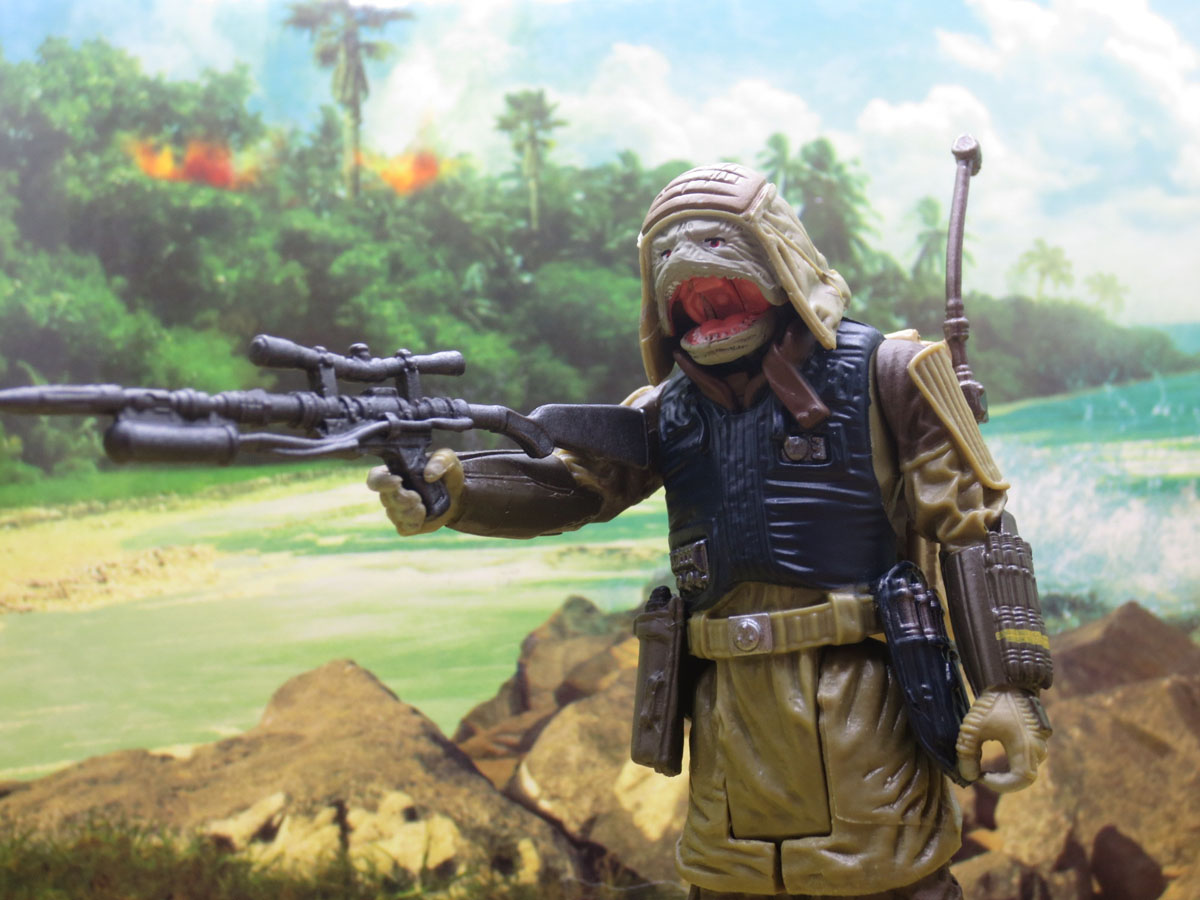 I’ve got no idea who Pao is, but his toy is great.  The amphibious creature features an intricately detailed sculpt and a fun alternate head articulation, not unlike The Force Awakens’ Admiral Ackbar– Pao’s neck doesn’t swivel, but his top jaw opens, presumably to emulate the battle cry he’s known for, as indicated on the back of the figure’s box.  Pao also sports a rifle and a removable backpack, both adding to his slapdash militia aesthetic, perfect for any Rebel soldier.  Fingers crossed, this guys lasts more than ten seconds of the movie. 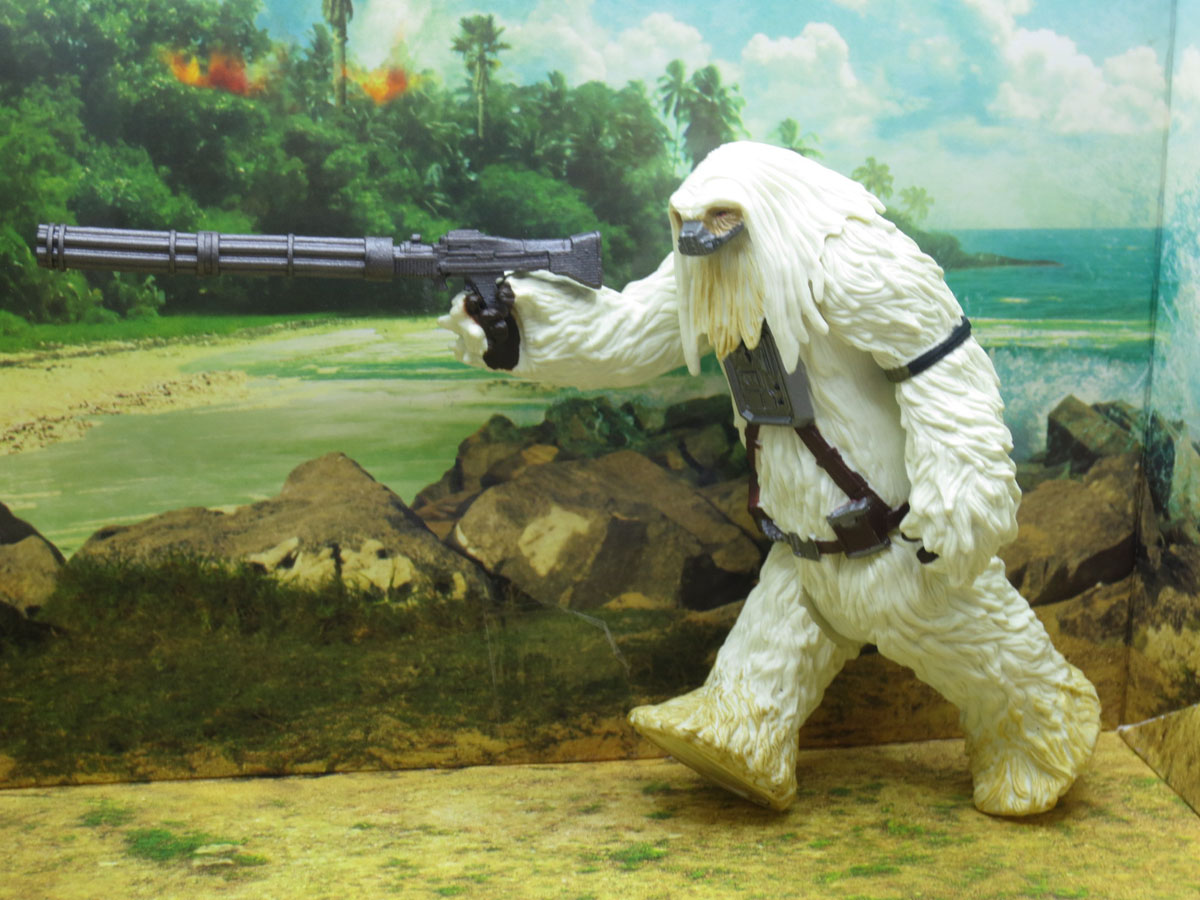 Our second set features the massive Moroff– a mercenary who looks like a cross between Chewbacca and the Wampa– and another new Stormtrooper variant, the Scarif Trooper (AKA Shoretrooper).  These figures are both really fun, especially Moroff, who is big and bulky, and perfectly in tune with the classic Star Wars design, be it the shaggy fur that covers his body, or the cybernetic (?) attachments on his face and chest.  The box bio describes this creature as a mercenary, willing to sell his skills to the highest bidder… I’m assuming that would be the Rebellion in this case?  Even if not, it’d be pretty great to see this monstrous white beast fighting alongside the similarly-colored Stormtrooper army. 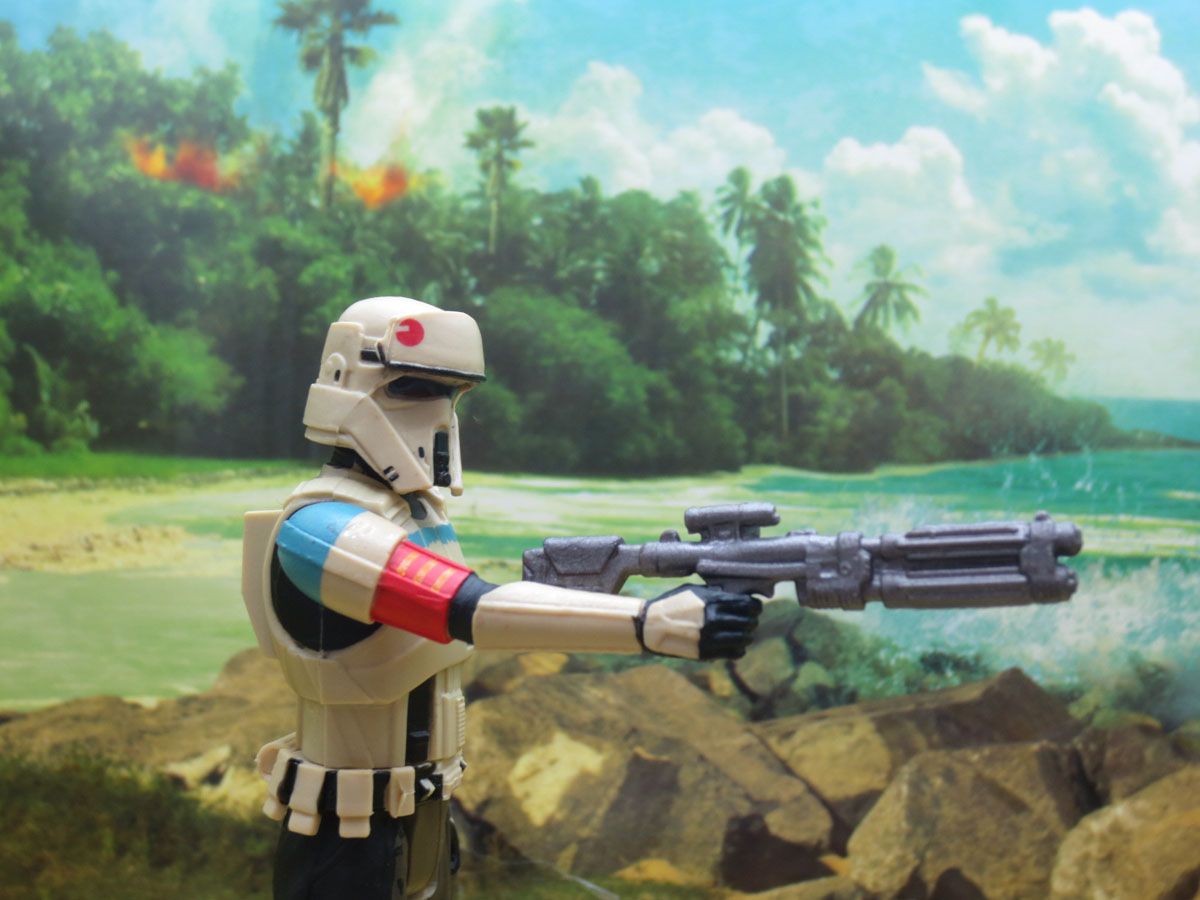 The Shoretrooper is an all new design, but he’s clearly inspired by the multi-colored, accessory-heavy Clonetroopers of Revenge of the Sith and The Clone Wars.  That’s not my favorite era of Star Wars, but I do dig this design, and I love the figure’s naturalistic paint job.  Cast in a sandy off-white, the Shoretrooper definitely sidesteps the pristine coloring of the standard troopers, and this– to me– makes his painted armor much more pallatable. While the “split skirt” t-crotch design of some previous Stormtroopers has been a pet peeve of some collectors, the Sandtrooper’s skirt is apparently parted in the center by design, allowing the two legs to be fully free to move without compromising the middle of the skirt.  I’m curious if this was a happy coincidence, or if the character’s design was influenced by the frustrations of people annoyed by toys like the Snowtrooper.

There isn’t much to say about the weapons packed in with these sets.  They’re what you’d expect– big, goofy missile launchers which fasten to the figures’ backs, which I would literally eat my hat were I to see make it to the big screen this December.  But kudos to Hasbro for once again keeping the action features relegated to throwaway accessories, which allows these great sculpts of interesting new characters to really shine.  I doubt these will be the only Deathtroopers and Shoretroopers we see in the Rogue One collection, and adding them here feels like a sly, subtle way to start building our armies on day one.

The Rogue One two-packs are available now, as part of the Force Friday 2016 collection. 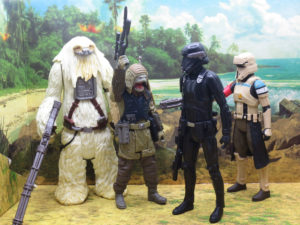 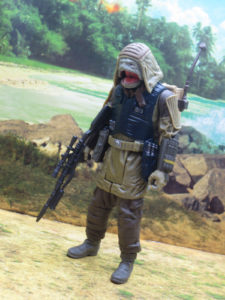 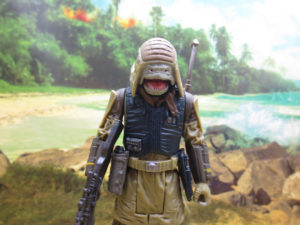 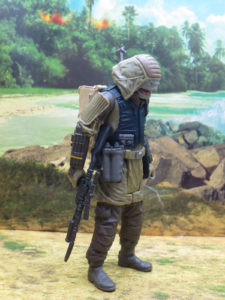 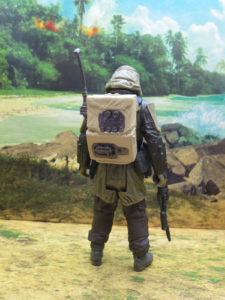 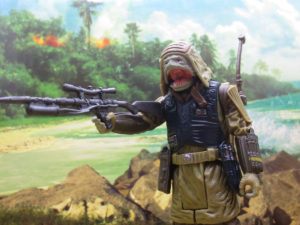 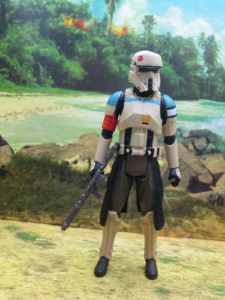 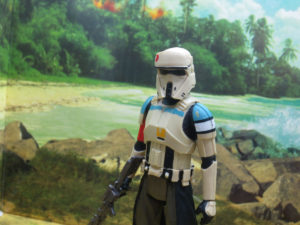 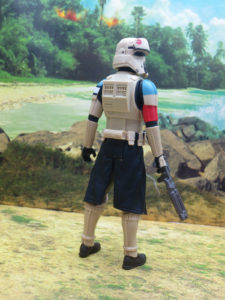 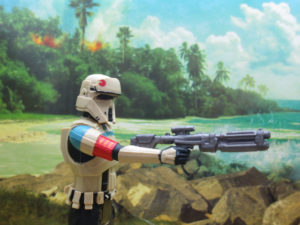 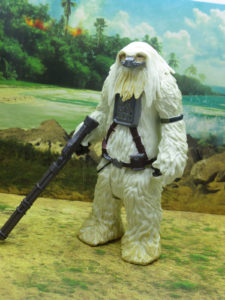 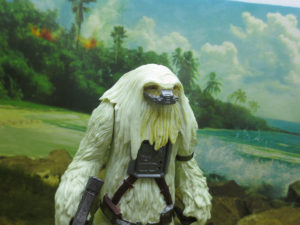 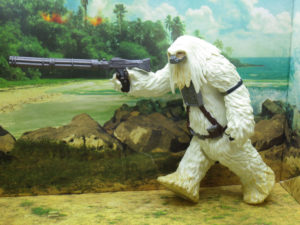 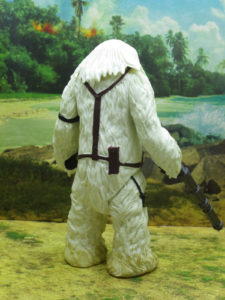 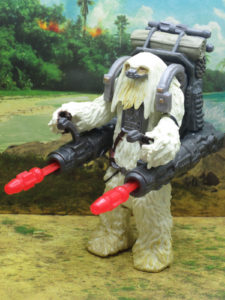 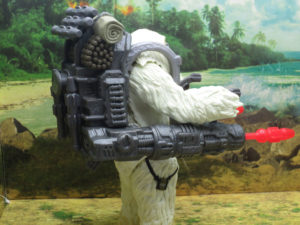 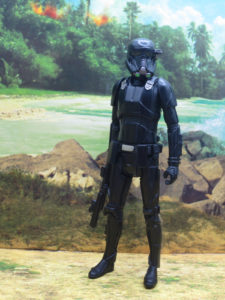 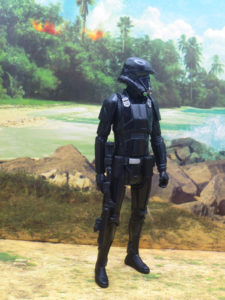 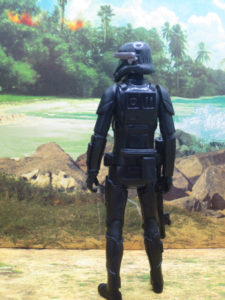 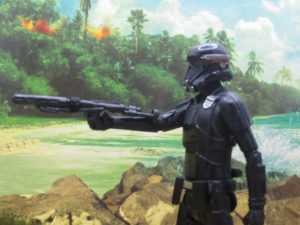 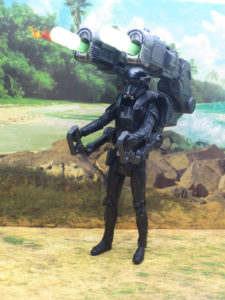 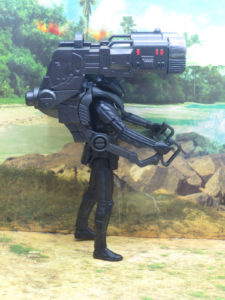