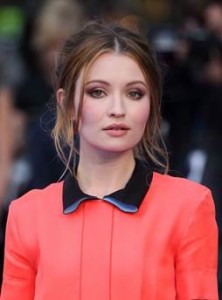 Neil Gaiman said, “I’ve been fascinated by Emily Browning since ‘A Series of Unfortunate Events’. She has a challenge ahead of her: Laura is a tricky character, and the Laura on the screen is even trickier and more dangerous than the one on the page. She’s going to have a wonderful time bringing Laura to life.”

Commented Bryan Fuller and Michael Green, “You don’t need a magical coin when you have Emily Browning. She brings a fascinating spark of life to every role she inhabits and we are tickled she will be lighting up Laura Moon and bringing her to life in more ways than one on American Gods.”

Browning joins Ian McShane and Ricky Whittle who were recently announced to play Mr. Wednesday and Shadow Moon, respectively, in “American Gods.”  As Laura Moon, Browning plays Shadow Moon’s wife, who has been preparing for her husband’s pending prison release.  Little does she know that she will go on an unexpected journey that leads her to an epiphany about her relationship and affords her a second chance to get things right.

A native of Australia, Browning first received international recognition when she was cast as Violet Baudelaire in the 2004 film adaptation of the popular children’s book series, “Lemony Snicket’s A Series of Unfortunate Events.”  She received a 2005 Critics Choice Award nomination for “Best Young Actress” from the Broadcast Film Critics Association on behalf of her performance, as well as a 2005 “Best Actress” Award by the Australian Film Institute. She was honored with the “Breakthrough Performer” award at the 2011 Hamptons International Film Festival and received a “Best Actress in a Leading Role” nomination by the Film Critics Circle of Australia, as well as the Australian Film Critics Association for her work in Julia Leigh’s 2011 art-house film “Sleeping Beauty.”  Additional film credits include “God Help the Girl,” Legend” opposite Tom Hardy “Ghost Ship,” “Ned Kelly,” “The Uninvited,” “Stranded,” “Sucker Punch,” “Magic Magic.” “The Host,” “Summer in February,” “Plush” and “Pompeii.”

American Gods has been translated into over 30 languages and earned numerous accolades including Hugo, Nebula and Bram Stoker Awards for Best Novel. The plot posits a war brewing between old and new gods: the traditional gods of mythological roots from around the world steadily losing believers to an upstart pantheon of gods reflecting society’s modern love of money, technology, media, celebrity and drugs. Its protagonist, Shadow Moon, is an ex-con who becomes bodyguard and traveling partner to Mr. Wednesday, a conman but in reality one of the older gods, on a cross-country mission to gather his forces in preparation to battle the new deities.